Albert Ellis is best known as the creator of Rational Emotive Behavior Therapy. This form of psychotherapy is one of the most practiced forms of cognitive therapy today. What I find most interesting is that he was primarily influenced by philosophy rather than psychology.

Ellis's hobby, beginning at the age of 16, was philosophy--first reading it, and then writing it. When he enrolled in the City College of New York for his undergraduate degree he was still reading these philosophic texts although his major was Business Administration. In 1932, Ellis met Manny Elston and Albert Ney, both of whom had a profound impact on his thoughts and views of the world at the time. Ellis states in his autobiography All Out! that it was these two individuals that encouraged him to apply some of the economic philosophy that he was reading and turned him from armchair philosopher into active revolutionist. Elston, a professor of music, and Ney, a decorator, had run the Young Communist League of America (YCL), until they had been tossed out due to some ideological differences. Elston and Ney went on to start their own revolutionary party, Young America.

Young America was against the American Communist Party (CP), but was for socialism and collectivism. Young America appealed to Ellis for a variety of reasons:

"First, it was radical, not namby-pamby liberal or social democratic. Second, it was opposed to the Communist Party of America, which I considered Stalin's handmaiden and the apologist for his dictatorial terrorism and suppression of free speech. Third, it would fight against fascism, which had already taken over Italy,

and against Nazism, which was about to take over Germany. Fourth, it might help save the United States from the Great Depression, which capitalism and the Republican Party had brought on and which was now entering its devastating third year." 1

Elston and Ney made Ellis leader of one of the chapters. Ellis was deathly afraid of public speaking, but would use this opportunity to overcome his fear. He forced himself to deliver a public speech once a week, laying out the framework of Young America to audiences in the hopes of gaining supporters and new members. As a result of this exercise not only would he overcome his fear, but would become an excellent public speaker. This experience served to teach Ellis about phobias, and influenced his psychotherapy practices later in life.

Back to Ellis' revolutionary days. He was enrolled in Business Administration so economics was at the forefront of his studies. He had believed that collectivism should trump capitalism based on what he had read and was learning in college. Capitalism was rather inefficient what with all the technology available why not overproduce and take the surplus time to enjoy one's life? Ellis, above all, believed in efficiency--if collectivism was employed, then workers could harness technology to do a significant portion of labor, and workers could enjoy shorter work hours. Ellis later stated that his view had been naïve because although collectivism was in theory a good idea and capitalism a bad one, under Stalin's dictatorship the farmers and factory workers sabotaged socialism and its magnanimous and self-sacrificing virtues. Perhaps capitalism was in fact the more efficient system.

Though Ellis later turned away from Marxism, traces of his early enthusiasm for efficiency are apparent in his papers. I just started sifting through the Albert Ellis Papers, charged with the job of organizing and describing these materials. While the many boxes contain a disarray of papers, I did come across a large brown envelope with "Primer of Marxism, First Draft," written across the front. Inside I found a manuscript along with a letter to Simon and Schuster from Ellis dated March 25, 1936. Previously, on January 28, 1936, Oxford Publishing Company had turned down the manuscript for publishing. I came to uncover that Ellis had completed this Primer in 1935, at the age of 21.

In this manuscript of the Primer, Ellis breaks down Das Kapital, volume by volume, explaining the tenets of Marx's text. He eliminates that which he considers confusing, or unnecessary and confusing making for a more efficient text. This primer is essentially an explanation, if you will, of Das Kapital. For anyone who has read this Marx text, this primer might well be appreciated.

Interestingly, it would appear that this primer has never been published.

I have scanned some of the text and posted it here. 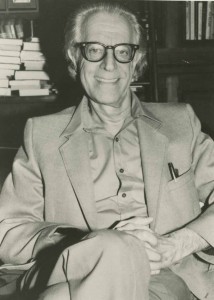