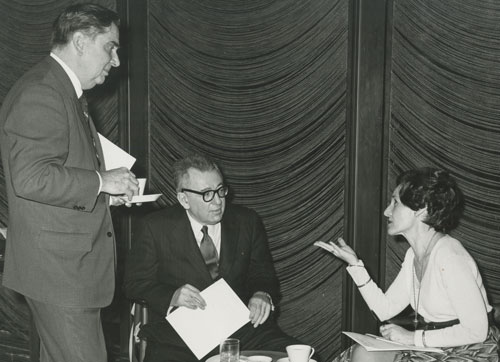 Ada Louise Huxtable, the Pulitzer Prize-winning architectural critic, died on January 7. She was most recently the architecture critic for the Wall Street Journal. As the New York Times reported in its obituary, Ms. Huxtable considered Avery Library her "most treasured academic home."

She covered Avery Library exhibitions and events in many pieces for the Times, and was always generous in her praise, as in this 1980 review of a special exhibition celebrating Avery Librarian Adolf Placzek and this 1972 essay, "A Place of Genuine Joy".  In this 1977 article on the library's recent renovation, Ms. Huxtable recalled visiting Avery and holding some of the world's greatest treasures of architectural literature in her hands.