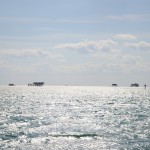 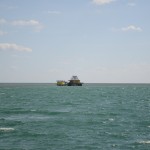 Stiltsville is a collection of 7 wooden shacks on pilings perched on sand flats in shallow water located on Biscayne Bay one mile off the coast of Miami, Florida.

Margaret Smithglass, Built Works Registry Project Librarian, and I had the unique opportunity to see Stiltsville up close and personal on a private boat tour with commentary by local historian Dr. Paul George. The tour, held in early April, was sponsored by Association of Collegiate Schools of Architecture. 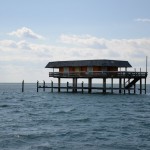 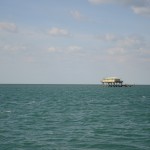 The Stiltsville community began in the early 1930′s. At its peak in 1960, there were 27 structures used for weekend retreats and parties.  They were privately owned and later acquired a colorful reputation as hangouts for “gamblers, boozers and flashy women”. Hurricanes, fires and storm surges made every building relatively short-lived. In 1992 there were 14 structures but after Hurricane Andrew struck that August only 7 buildings survived. 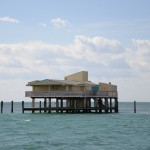 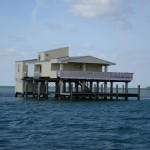 The shacks now lie within the boundaries of Biscayne National Park and are co-managed by the National Parks Service and the Stiltsville Trust. The NPS has agreed not to demolish what is left of Stiltsville and they sit in limbo waiting for a preservation and public access plan to be developed. Access to the buildings is by permission only. 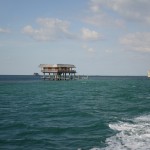 There is a new Current Journals list for #AveryIndex
http://library.columbia.edu/locations/avery/avery-index/current_periodicals.html 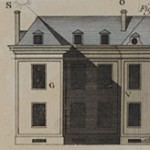 Please join us to view highlights of Avery 2013-2014 acquisitions!

Sponsored by Avery Friends & the Friends of the Columbia University Libraries
To RSVP, please call 212.854.6199
or email: Avery-Friends@libraries.cul.columbia.edu