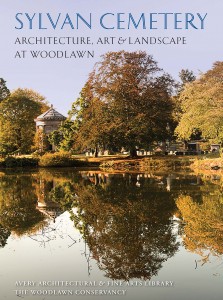 Avery Library welcomes new and returning students! We hope you had a great vacation and are ready for the new semester.

Just a couple of quick reminders:

When we are not available for reference questions you can click on “Ask a Librarian” to be connected to Virtual Reference.

Our hours for the Fall semester are here.

We are giving tours of the library and resources. Here is the tour schedule:

Announcing the appointment of Associate Professor Amale Andraos as the new Dean of the Graduate School of Architecture, Planning and Preservation, Columbia University President, Lee Bollinger, writes “An inspiring teacher, a respected colleague, and a pioneering practitioner whose innovative commissions in cities around the world have earned widespread admiration, Amale is a new leader among a rising generation of creative architects and designers of our physical environment.”

Amale joined Columbia’s Graduate School of Architecture, Planning and Preservation in 2011. Amale Andraos received her M.Arch. from the Graduate School of Design at Harvard and her B.Arch. from McGill University. She began her teaching career at the American University of Beirut and has held faculty posts at Princeton, Harvard, and the University of Pennsylvania. She is the co-founder with her husband, GSAPP alumnus Dan Wood, of the New York-based firm WORKac.  Their long list of projects ranges from a master plan for rebuilding downtown Beirut to the design of the Edible Schoolyard at P.S. 216 in Brooklyn.

Avery Library congratulates Dean Andraos on her appointment and looks forward to working with her on furthering the educational objectives of the School.

David Rosand was an esteemed scholar, beloved teacher and a true supporter of Avery Library.

He was the Meyer Schapiro Professor emeritus of Art History at Columbia University and a graduate of Columbia College. He received his PhD from Columbia in 1965 and was awarded a Fulbright fellowship in 1961 and a Guggenheim fellowship in 1974.

His scholarship focused on the Italian Renaissance and on the history and criticism of the graphic arts.  His publications in the field include Titian and the Venetian Woodcut (1976—co-authored with Michelangelo Muraro), Titian (1978), Painting in Cinquecento Venice: Titian, Veronese, Tintoretto (1982; rev. ed. 1997), The Meaning of the Mark: Leonardo and Titian (1988), Myths of Venice: The Figuration of a State (2001), and Drawing Acts: Studies in Graphic Expression and Representation (2002).  In the area of American painting he has published Robert Motherwell on Paper: Drawings, Prints, Collages (1997) which accompanied an exhibition in the Wallach Art Gallery and The Invention of Painting in America (2004). His most recent book, Véronèse: Painting in cinquecento Venice was published in 2012.

He was a member of the American Academy of Arts and Sciences, the Istituto Veneto di Scienze, Lettere ed Arti and the Ateneo Veneto in Venice, and served for many years on the board of the Renaissance Society of America, which honored him with the Paul Oskar Kristeller Lifetime Achievement Award (2007).  He was project director for Save Venice, Inc., an organization dedicated to the conservation of the art and monuments of Venice. 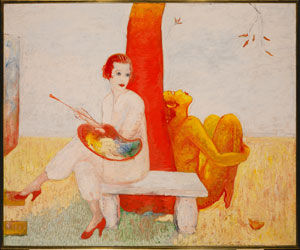 Columbia University Libraries/Information Services‘ Avery Architectural & Fine Arts Library and Rare Book & Manuscript Library (RBML) are pleased to announce Columbia’s participation as a major lender to the exhibition Florine Stettheimer at the Lenbachhaus in Munich, Germany, from September 27, 2014 through January 4, 2015. The exhibit will include 9 large-scale paintings from Columbia’s collections including Stettheimer’s highly regarded 1923 portraits of herself, and of her sisters Carrie and Ettie, as well as maquettes for her stage production of Four Saints in Three Acts, a collaboration with Virgil Thompson and Gertrude Stein. 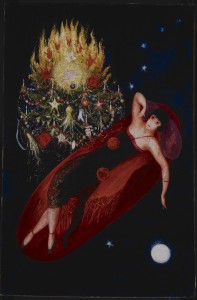 Florine Stettheimer (1871-1944) was a well-known New York City-based painter and
designer who, with her sisters Ettie and Carrie, held regular salons in their home on
the Upper West Side, socializing with avant-garde artists and writers such as
Marcel Duchamp, Alfred Stieglitz, and Leo Stein.  Stettheimer initially studied at the
Art Students’ League, then spent nearly 20 years in Europe with her mother and sisters,
where she was exposed to early modernist art forms such as Post-Impressionism and
Fauvism, which were influential on her art.  After 1917 she developed her own
idiosyncratic, fluid style that remains influential on some artists today.

“Stettheimer’s work fascinates viewers because it offers a new, feminist vision about
modernism in the early twentieth century,” said Roberto C. Ferrari, Curator of Art
Properties.  “Rather than canvases of non-objective abstractions or gestural
brushstrokes of color, Stettheimer’s paintings emphasize narrativity and frequently
depict recognizable people in her life, but represented as if they are lithe, sinuous
dancers in timeless landscapes. We are thrilled to participate in this exhibition and
bring Stettheimer’s  extraordinary work into public view.”

Columbia University holds the largest collection of Stettheimer’s works, including more
than 60 paintings, drawings, and decorative arts in Art Properties, Avery Library.  The
Stettheimer holdings in RBML include sketchbooks, archival  papers, stage props and
costumed maquettes.  The Stettheimer collection was a bequest to Columbia’s
collections in 1967 from the estate of her sister Ettie, a graduate of Barnard College.

The Lenbachhaus in Munich is renowned internationally for its collection of works by the
Blue Rider artists, an important modernist group active in Munich prior to World War I.
In an effort to introduce European audiences to alternative approaches of modernism,
the Lenbachhaus will introduce Stettheimer as one of a series of artists who developed
their own distinctive visual languages and pioneered new approaches to art.

Art Properties oversees the art collections owned by Columbia University. Comprised of approximately 15,000 works of art in
all media, the collections include works from all cultures and time periods. Highlights include public outdoor sculpture with works by
Auguste Rodin, Daniel Chester French, Henry Moore, and others; fine art photography from daguerreotypes to Andy Warhol polaroids
to contemporary works; and the Sackler Collection of over 2,000 Asian art works. The Art Properties collections are available for
research consultation and curricular use, and also may be requested for loan to special exhibitions.
artproperties@library.columbia.edu

Columbia University Libraries/Information Services (CUL/IS) is one of the top five academic research library systems in North America. The collections include over 12 million volumes, over 160,000 journals and serials, as well as extensive electronic resources, manuscripts, rare books, microforms, maps, and graphic and audio-visual materials. The services and collections are organized into 21 libraries and various academic technology centers, including affiliates. CUL/IS employs more than 450 professional and support staff. The website of the Libraries is the gateway to its services and resources: library.columbia.edu.