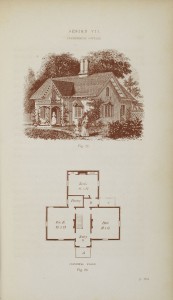 A.J. Downing and His Legacy

Alexander Jackson Downing, known as the “father” of the American architectural pattern book, was born 200 years ago, on October 31, 1815, in Newburgh, New York. Not an architect, nor a trained artist, Downing was an avid reader of British horticulture publications, some of which illustrated ideal houses for the country. Through the British publications, Downing saw both how books could transmit design ideas in words and pictures, and how modest houses with Romantic Revival design gestures could form the basis for an improved American housing for its middle classes, particularly in rural and small town settings. To further that end, he published three important works: A Treatise on the Theory and Practice of Landscape Gardening (first issued in 1841); Cottage Residences (first published 1842); and The Architecture of County Houses (first issued in 1852). Each ran to several editions, and remained in print for some thirty years. Earlier architectural design books showed buildings in stiff and barren elevation drawings, where in Downing’s images, the house, landscape, and inhabitants become part of one happy, desirable image. The exhibition in Avery Library’s Classics Reading Room showcases several editions of Downing’s publications and those of many successors, offering a glimpse into the world of mid-19th century architectural publishing in the United States and revealing how Downing’s distillation of design ideas came to influence American housing for half a century.