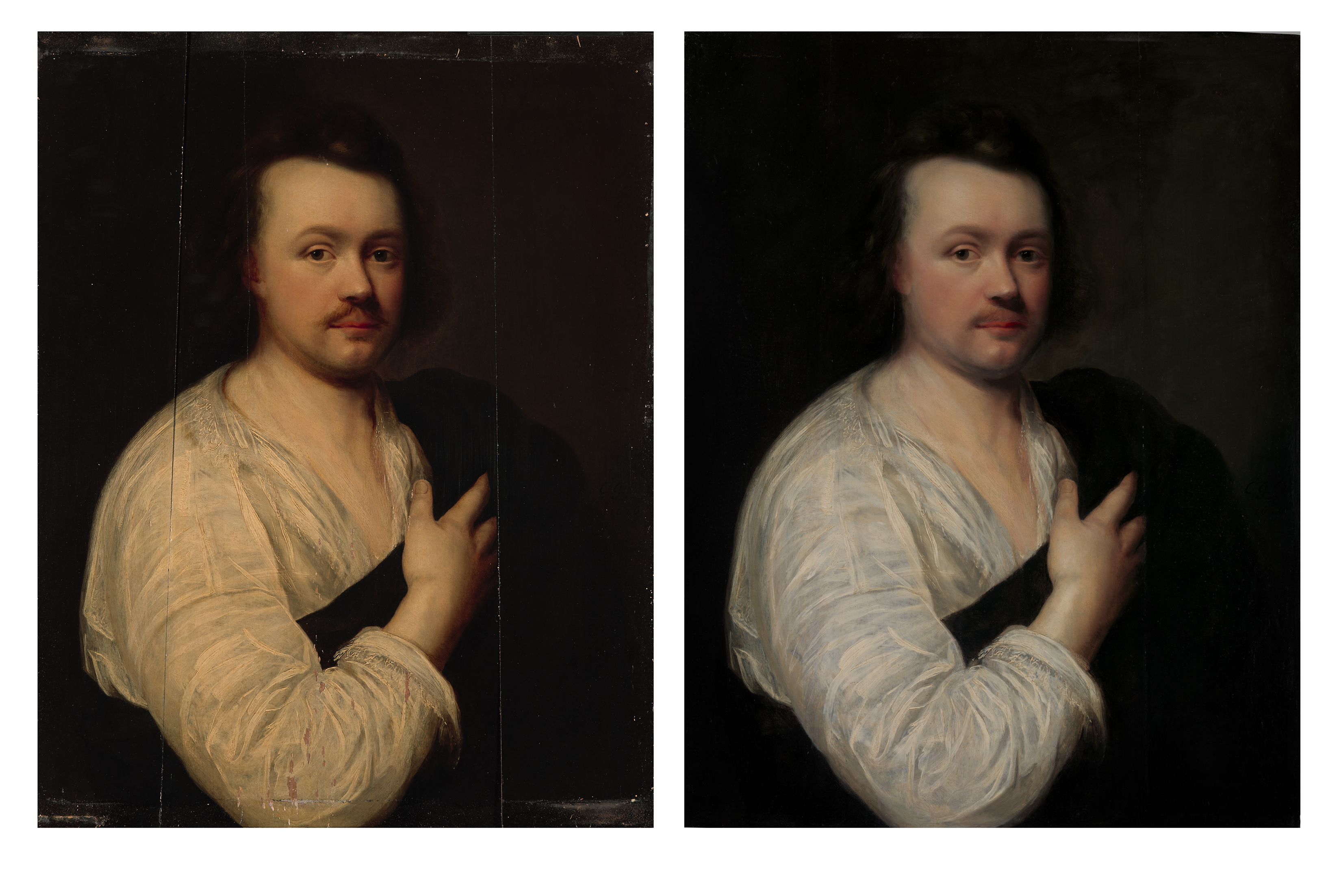 NEW YORK, November 1, 2015 – Columbia University Libraries/Information Services’ (CUL/IS) Avery Architectural & Fine Arts Library, Art Properties, and the Health Sciences Library, Archives & Special Collections, are pleased to showcase the end result of a major conservation project generously funded by donors Geraldine and Robert J. Dellenback. Portrait of Sir Kenelm Digby (1603-1665) was painted by the British artist Cornelius Johnson (1593-1661). The painting is oil on panel and signed and dated 1626. It was a bequest in 1974 to the College of Physicians and Surgeons from the estate of Dr. Jerome P. Webster, Professor Emeritus of Clinical Surgery at Columbia, and is part of the Jerome P. Webster Library of Plastic Surgery housed in Archives & Special Collections. “It has been an honor to have provided the funds for the restoration of the remarkable portrait of Sir Kenelm Digby so that at last it might be in the place of honor it richly deserves,” said Mrs. Dellenback, the daughter of Dr. Webster. “This generous donation from the Dellenbacks,” adds Roberto C. Ferrari, Curator of Art Properties, “has been instrumental in helping us properly care for one of the finest British paintings in the Columbia University art collection, and continue to advance our mission of using the art collection at Columbia for educational programming, curricular integration, and research/study by students, faculty, and outside scholars.”

Over time, the structure of the painting’s wood panels had separated, paint losses continued to worsen, and the varnish had aged and altered the appearance of the picture, leading to the decision to place it in the temperature- and humidity-controlled storage vault of Art Properties until funds could be raised to pay for its full conservation. With funds donated by the Dellenbacks, Art Properties contracted with New York City-based specialists from Thomas Art Conservation and The Metropolitan Museum of Art, who worked on the painting in 2014. They restructured the wood panels, restored the frame, and conserved and cleaned the surface of the painting, revealing the exquisite portrait hidden beneath centuries of accumulated grime.

The artist, also known as Cornelis Janssen van Ceulen, was born in London, the son of exiles from Antwerp. His artistic career began during the latter years of James I. The portrait of Digby dates from the early part of the artist’s career, when he began moving away from depicting sitters in oval windows, but before he transitioned fully to painting works on canvas rather than wood panel. In her recent book on the artist, Karen Hearn, a retired curator from the National Portrait Gallery in London and Honorary Professor at University College London, has cited this portrait as one of the earliest examples of Johnson’s “melancholy-style,” another prime example of which is in the collection of The Huntington Library, Art Collections, and Botanical Gardens in San Marino, CA.

Digby, the sitter, was a member of an old and distinguished gentry family, although his father had been executed for collaboration in the Gunpowder Plot to kill the king and members of Parliament. Before he was twenty years of age, Digby had traveled extensively to Italy, France, and Spain, and in 1623 he was knighted and named a gentleman of the privy chamber of Charles I, then still Prince of Wales. Soon after this portrait was completed in 1626, Digby had a brief but successful career as a commander in the British navy, but after the unexpected death of his wife in 1633 he turned to the study of natural sciences and philosophy, and authored a number of treatises based on his own scientific and medical experiments. Digby’s work on the healing properties of the occult “powder of sympathy” included several references to the pioneering work of the Italian plastic surgeon Gaspare Tagliacozzi (1545-1599), whose biography Dr. Webster co-authored in the 1950s.

The Columbia University art collection, stewarded by Art Properties and based in Avery Architectural & Fine Arts Library, comprises over 10,000 works of fine and decorative art objects in all media from all time periods and all cultures. The portrait is on display in the Archives & Special Collections Geraldine McAlpin Webster Reading Room at the Health Sciences Library, and is available for viewing by appointment only. Archives & Special Collections serves as the archives for Columbia’s four health science schools, holds a 27,000-volume rare book library in the history of the health sciences, and has a growing number of personal papers. The Jerome P. Webster Library of Plastic Surgery forms part of the department’s holdings and is considered one of the world’s most comprehensive collections on the subject, with works dating from the 15th through the 20th centuries.