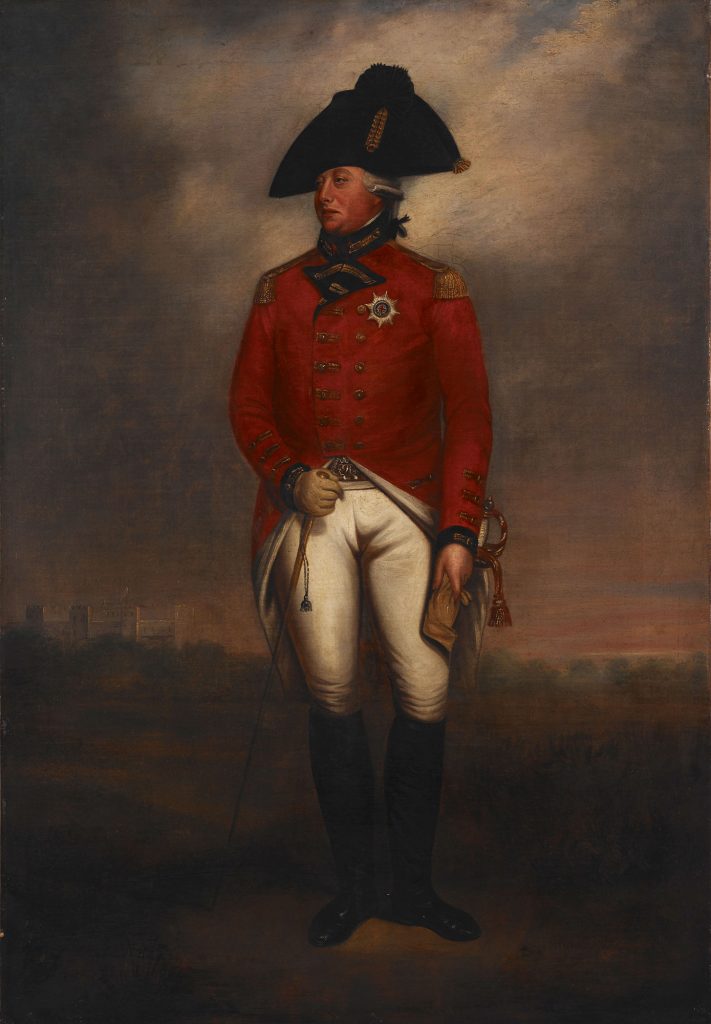 Art Properties has loaned a painting to the exhibition The Battle of Brooklyn which is now open at The New-York Historical Society. This exhibition commemorates the decisive first battle that took place between the rebel forces and the British following the signing of the Declaration of Independence in 1776. Although the American forces suffered a tremendous defeat, this battle became a decisive moment in the military campaign led by Washington and his troops.

The painting loaned by Art Properties is this whole-length portrait of King George III (1738-1820), the reigning British monarch during the American Revolution. Painted by Sir William Beechey (1753-1839) and his studio, the portrait depicts the monarch wearing the Field-Marshal uniform of a red coat adorned with the Star of the Garter, white breeches, black boots, and a black bicorn hat. In his right hand he holds a cane and in his left a pair of gloves. He stands in a landscape with Windsor Castle in the distance. This portrait is one of a number produced by Beechey’s studio after the success of the original life-size version exhibited at the Royal Academy in 1800.

George III was the grandson of George II, the eponymous founder of King’s College. This portrait was donated to Columbia in 1943 by Mrs. Mary Hill Hill, who claimed to have purchased it in England. Remnants of a label on the stretcher, however, also identify the painting as the same sold at the April 2, 1931 auction by American Art Association of works owned by Ehrich Gallery in New York. The purchaser at that time was recorded as a Miss M. Brown. The description of the painting in the catalogue incorrectly describes it as depicting the king as the Prince of Wales and the building in the background as Hatfield House. George III had been king since 1760, so the painting would not depict him as the Prince of Wales at that time, and a visual comparison of images of Hatfield House clearly shows that they are different buildings and that ours is Windsor Castle. There is other evidence that the same painting was sold at a Christie’s London auction in 1926, but its provenance prior to that date is still undetermined. 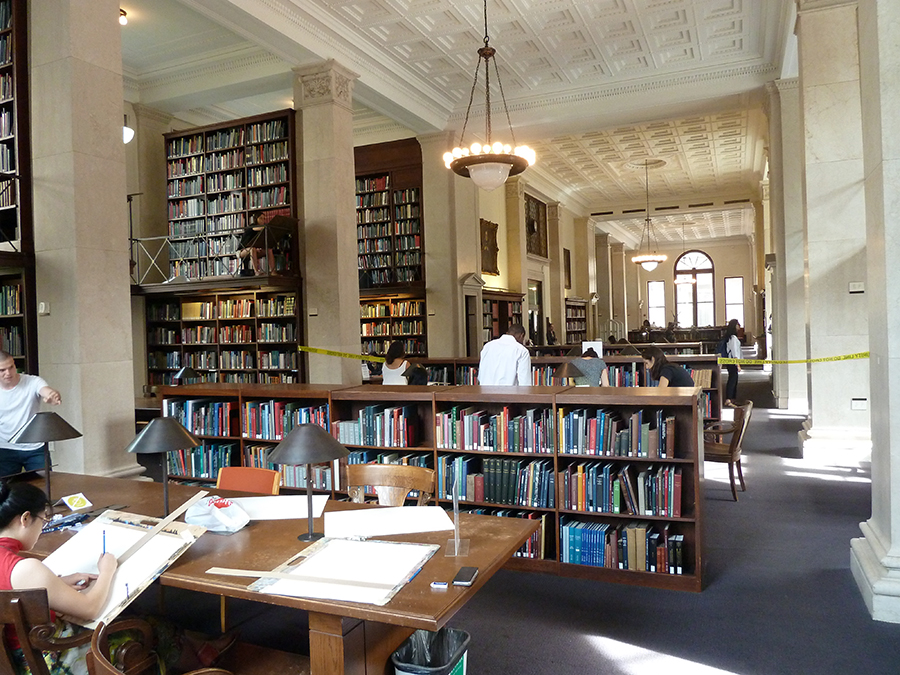 Avery Library welcomed Professor Ioana Manolache’s architectural drawing class for the School of the Arts undergraduate program on Sept. 21, 2016. They were studying  one-point perspective of a large architectural space.

Popularized during the Renaissance, one-point perspective makes use of linear geometric planes that converge on the horizon onto one vanishing point.

According to Professor Manolache “The assignment isn’t just to teach perspective, but is also meant to show students that interesting, evocative spaces can be found on campus, and not have our surroundings be taken for granted.” 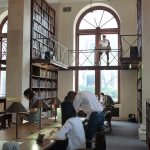 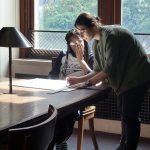 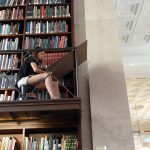 The Metropolitan Opera House, the “old Met” opened on October 22, 1883 and was designed by J. Cleveland Cady. Located at 1411 Broadway, the Opera House occupied the entire block between West 39th Street and West 40th Street. Nine years later on August 27, 1892, the theater was gutted by fire. In 1903, the interior of the opera house was extensively redesigned by the firm Carrère and Hastings. 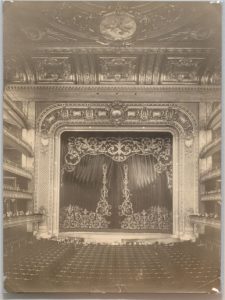 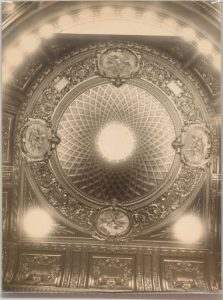 It was quickly realized that the backstage facilities were deemed to be severely inadequate for such a large opera company. Over the years, plans were put forward to build a new home for the company. Designs for a new opera house were created by various architects including Joseph Urban and Benjamin Morris. Several sites were also proposed including Columbus Circle. Rockefeller Center (as it is now known) was considered but financial troubles, coupled with the stock market crash in October 1929, put an end to this scheme. 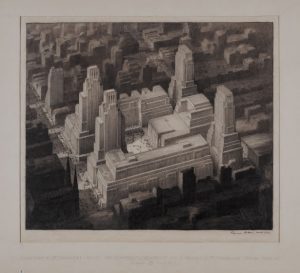 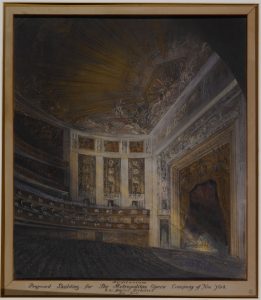 At long last, the Upper West Side gave the Met the opportunity to build a modern opera house with the most technically advanced stages in the world. Since 1966, Lincoln Center has been home to the Metropolitan Opera, designed by Wallace K. Harrison of the firm Harrison & Abramovitz. 50 years later, this building is still captivating students from around the world. 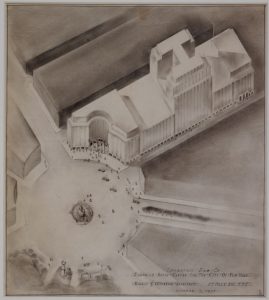 Interested in studying the Met? Explore the vast holdings for Lincoln Center at the department of Drawings & Archives. Email avery-drawings@library.columbia.edu to schedule an appointment. For access to related materials in the Joseph Urban collection, contact the Rare Book and Manuscript Library at Butler. 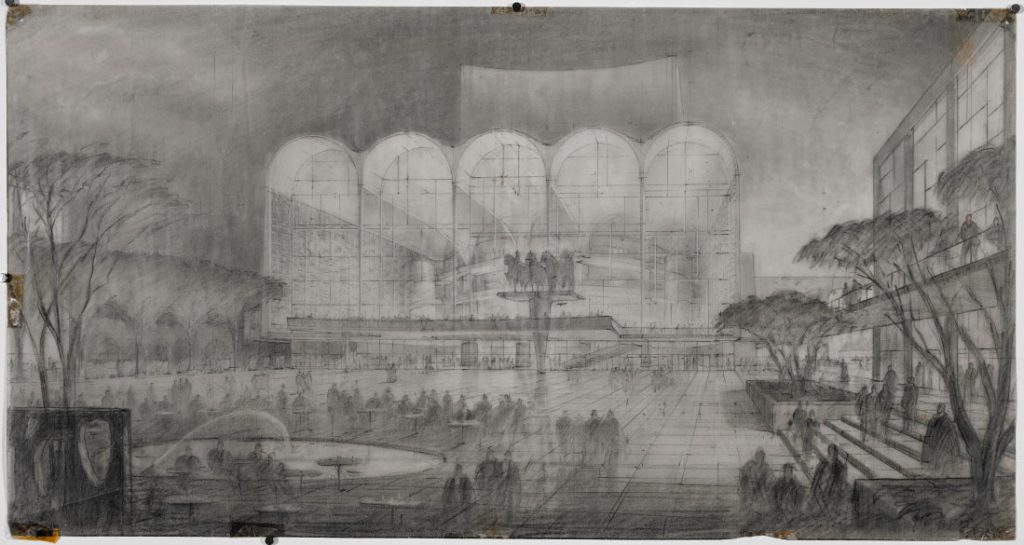 Hugh Ferriss. Lincoln Center for the Performing Arts. Center of the Center, 1958.

The Douglas Darden Collection has been processed and is now available for researchers! This project was completed as a part of the Columbia Libraries Graduate Internship Program in Primary Sources by Sara McGillivray, a Master’s student in GSAPP’s CCCP Program.

Douglas Darden was an American architect based out of Denver, Colorado. He was best known for his book Condemned Building, an assembly of ten allegorical projects. The Archives’ collection contains much of Darden’s work for that book as well as the process work for his second book, Laughing Girls. It also contains a large portion of Darden’s early works and his professional papers, which lend background and context to his later work. 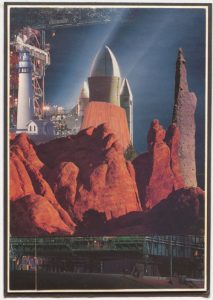 Born in Denver, Colorado in 1951, Darden studied ballet, before graduating with a Bachelors of English and Psychology from the University of Colorado at Boulder in 1974. His background in literature and dance translate into expressive works which rely on narrative structuring. Darden also studied Industrial Design at Parsons School of Design, and received his Masters of Architecture from the Harvard Graduate School of Design in 1983. He began work on the projects that would be later featured in Condemned Building, meanwhile, teaching at Harvard, then at the Catholic University of America, here at Columbia University, and later at the New Jersey Institute of Technology. Darden’s explorations of his industrial surroundings in New Jersey influenced the atmosphere of his work. Likewise, his time as a Fellow of the American Academy in Rome from (1988-9) gave him a deeper interest in the history and buildings of Rome. 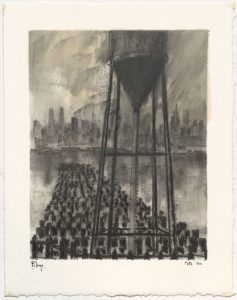 “Pilings” (1985): an example of Darden’s early work, with an atmosphere inspired by the environment in New Jersey.

Darden began teaching at the University of Colorado at Denver in 1990; it was at this time that he was diagnosed with leukemia. Darden continued to work through his illness, teaching and designing, and in 1993, Darden released Condemned Building. (Condemned Building is now out of print, but Avery Library does have a copy.)  Although drawn in very detailed plan, section, and elevation, the projects in Condemned Building were unbuilt works, designed as allegorical structures only. Each project is described with a narrative akin to the acts in a play, describing the use of and circulation through each project. Darden’s process for these projects integrated visual and textual research, combining literary sources with the manipulation of graphic materials, and the Archives’ collection includes much of this work, in addition to the more well-known finished drawings featured in Darden’s book. This process work provides the researcher with an inside look into the allusions Darden tucks into each project from Duchamp, to Lequeu, to Piranesi, revealing his mischievous sense of humor. 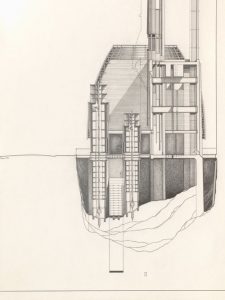 “Melvilla” (1990): detail of Darden’s design for a library built on the location of Herman Melville’s former home in New York City, and featured in Condemned Building.

Darden’s second book, Laughing Girls, moved further into narrative. Taking the form of a graphic architectural novel, Laughing Girls combined architectural drawing and collage with a storyline centered on three characters that moved from Troy, New York to Troy in Greece. Darden experimented with text and font, graphic images from his research and travels, and graphic elements converted from audio recordings. The Archives’ collection includes Darden’s research, studies, and drafts for Laughing Girls, however, the book was left unfinished when Darden’s leukemia returned; he passed away in April 1996.

In addition to teaching, Darden lectured and exhibited his works internationally. The Archives’ collection contains promotional material for many of these events, along with his faculty papers. The collection also includes many of Darden’s writings on architectural theory which were featured in a myriad of publications, and some which were never published, making it a valuable resource for anyone researching Darden, architectural theory, allegory, or narrative in architecture. 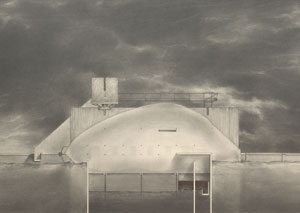 Avery is thrilled to announce the completion of our two-year collaborative project with the GSAPP Visual Resources Collection  (VRC) and Artstor to present the Avery/GSAPP Architectural Plans & Sections Collection in the Artstor Digital Library. Launched to coincide with the beginning of the 2016/17 academic year, Phase 2 adds another 10,000 images to the collection, bringing the total to more than 20,000 images representing 2000 projects in 60 countries that are now available for architectural research and instruction around the world. With an overall project focus on 20th century modernism, Phase 2 is particularly notable for the addition of nearly 100 projects by the master architect Le Corbusier, 100 projects in South America, and over 125 in Japan.

The Avery/GSAPP Plans & Sections project involved the efforts of Avery librarians and staff, GSAPP VRC curators, and more than 25 GSAPP students working together across many of the GSAPP programs — including M.Arch, Historic Preservation, Urban Design and Urban Planning – and contributing their diverse language, imaging and technology skills and their deep interest in the history of architecture.

For additional background on the collaboration, please see this ACSA article from January 2016.