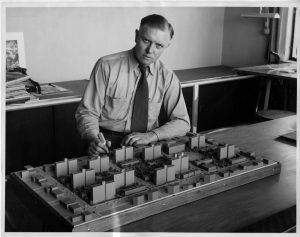 Recently opened for research is the archive of American architectural model maker Theodore Conrad (1910-1994). Conrad was a pioneer in the use of plastics and metals for models instead of the more traditional materials of wood, plaster and cardboard.  Conrad began his career making cardboard models in the office of Harvey Wiley Corbett while a student at Pratt. Upon graduation, Conrad earned a full-time job at Corbett’s firm, but soon left to establish his own shop in New Jersey. By the 1940s, Conrad’s enterprise became the largest in the country, employing at its heights 26 men and women. His assignments included work for McKim Mead and White, Edward Durrell Stone, Louis Kahn, Mies van der Rohe and Skidmore Owings and Merrill.

The collection is housed in Avery Drawings & Archives and is composed primarily of model photographs, account records, press clippings, and other model making documentation. For more information on the collection, please consult its online finding aid