As part of a new library-led public history project that looks to bridge gaps between the library, its collections, and the Union Theological Seminary students (past and present), I have been digging into the history of student-led activism here at Union.  The first step for me was to gain an understanding of student activism in the United States. Luckily there have been a few good books and many good articles written on the subject!

Robert Cohen in his book, When the Old Left was Young: Student Radicals and America’s First Mass Student Movement, 1929-1941, claims that it was not until a few years after the Great Depression struck that college students became politicized.  While it is certainly true that student-led activism became more pronounced and prevalent in the 1930s, it can’t be said that there was none before then. 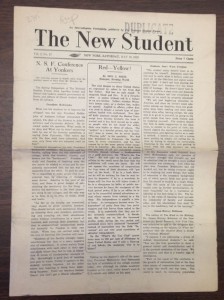 The existence of the intercollegiate biweekly paper The New Student provides evidence that there was in fact a growing social consciousness among America’s coeds.

The New Student ran from 1922 to 1929 and included stories speaking out against mandatory ROTC programs on college campuses, advocating for education reform, and voicing working-class concerns. 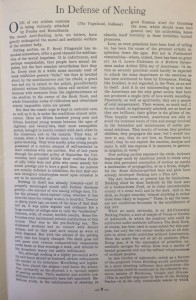 The paper also took on the popular student movement during the late 1920s — that of anti-necking policies adopted by many American college campuses. 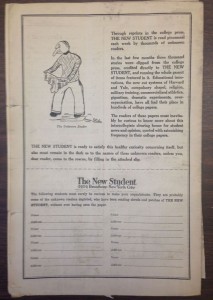 If you are interested in reading through issues of The New Student, the Burke Library carries issues from the years 1923 to 1929.