When you walk into the Burke Library and look through the book and periodical stacks and the reading room reference shelves, you probably feel that you know what is here.  However, have you heard about the library’s “so-called” hidden collections?

The archives in the Burke Library contain 350 collections of unique documents and artifacts which cover 4367 linear feet of shelving – we are quickly approaching our first mile!   Archives contain the papers, writings, objects or digital files of faculty, students or organizations.

Because of the fragility and unique nature of all these documents, they are shelved in separate climate-controlled storage, but may be accessed by any researcher through requesting an appointment on this form.

Rows of archives boxes may look rather dull … 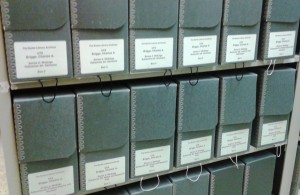 …but dip into them and the Burke’s archival collections will bring to life extraordinary experiences spanning across several centuries, up to recent times. Researchers, from near and far, visit the library to consult these collections to complete research for papers, dissertations, books and films.

There are many things about these collections that have captivated my interest over the years – one being the mysteries they hold. One such one has to do with materials relating to James Washington Wood.

An old inventory of Union Seminary collections lists a brief entry for James Washington Wood (1813 – 1884). Wood was one of the first students to graduate from Union back in 1839/40, when Union Seminary was based downtown at 9 University Place. Ordained in December 1839 as a Presbyterian pastor, Wood first worked in Deckertown, New Jersey, moving to Chester, New York and finally Allentown, Pennsylvania.

We would expect that the box of Wood’s papers could contain the usual items from a pastor of that period, possibly a notebook and some sermons. However his cryptic label on the original box, which was falling apart, stated: James Wood’s Spanish Manuscript.

The label was quite correct, but this was no ordinary Spanish manuscript.

In over 200 pages written by the distinctive hands of up to 5 scribes, this manuscript consists of the full records of the case brought before the Spanish Inquisition, against Juan Panis of Zapatero de Viejo in 1728-1730. 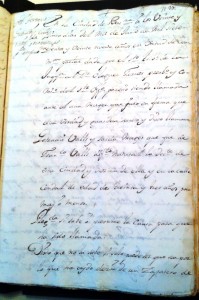 The documents throughout these full trial records tell a sad story and reveal that this unfortunate man was accused of heretical blasphemy before the branch of the Spanish Inquisition at Barcelona as late as the eighteenth century. 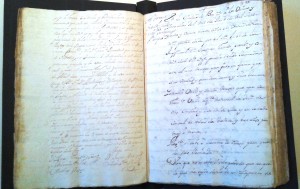 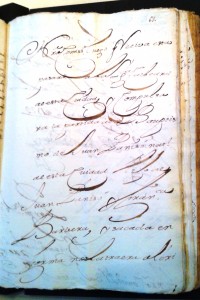 Juan Panis was clearly distressed at losing income from not working on the day of the Papal Jubilee in 1725, which Pope Benedict XIII had declared to be a holiday. Unfortunately Panis voiced this rather loudly in public and the results of his actions can be read in this detailed manuscript.

The personal disaster for Juan Panis lasted until his case report,including his renunciation, was accepted by the Council of Inquisition in Madrid, 1730. 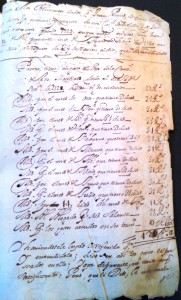 which he had to pay on his release, which covered all his food during years of imprisonment as well as the instruments of torture.

Now why is this item in our archives such a mystery?

Pastor James Washington Wood clearly gave these complete Spanish Inquisition trial documents to Union’s Library during his lifetime. He was born in Florida, New York State, in 1813 and was working only in churches on the East Coast USA.

So how do you think that Wood eventually came to own and gift to this library these extraordinary documents, extracted from a secure and surely secret storage in Barcelona or Madrid?