In 1588-89 a series of seven tracts [1] were published in England on a secret, mobile printing press, aggressively and colorfully attacking the hierarchy of the established church of England in favor of the more minimal, localized Presbyterian form of church government; the first of these, often referred to simply as the Epistle, contains, according the Oxford English Dictionary, arguably the first recorded occurrence of the word “fucker.”[2] 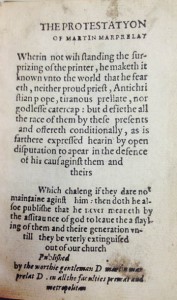 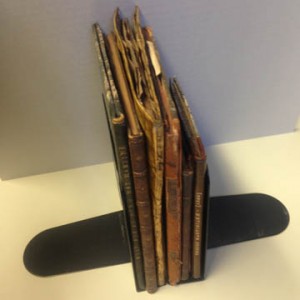 Think of it as an early modern instance of theological praxis. These polemical writings — generally referred to, because of their author’s nom de guerre, as the Martin Marprelate tracts — proved to be both popular and influential, occasioning from establishment voices a number of defenses and counter-attacks and triggering “one of the great manhunts of the English Renaissance” in search of their source.[3] Most of these now famous short works, included six of the seven of the Marprelate tracts, are held by the Burke Library.

Historically, they represent an important skirmish in long war of ideas, words, and human lives

conducted across 16th and 17th century Europe. Their literary style anticipates many of the great works of the next century with, as Marprelate scholar Joseph Black recently put it, their “wittily irreverent and conversational prose, ironic modes of argument, fluid shifts among narrative voices, swashbuckling persona, playful experiments with conventions of print controversy, and willingness to name names and tell unflattering stories about his opponents.”[4] Intimations of Swift, Carlyle, and Borges, among many others, with a large dollop of cable talk show bombast thrown in for spice.

Their playfulness can be seen at the most fundamental level, several claiming on the title page to have been printed “in Europe, not far from some of the Bouncing [i.e., loudmouthed, pretentious, etc.] Priests.” The very quality of the printing seems to testify to a cause on the run, with different types often crowding together into sometimes wobbly lines of type, set by printers working quickly with limited resources (see accompanying images). 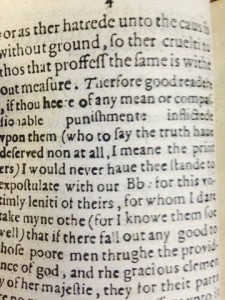 Technologically, they are attempts to harness a relatively new communication tool to disseminate disruptive ideas and influence society, a kind of Protestant samizdat, comparable in many ways to the typed, mimeographed leaflets and zines of the 20th century and the TOR-encrypted messages and tweets of the 21st.  As Black points out, the Marprelate tracts helped shape an English “proto-public sphere of debate” and to “create a tradition of oppositional writing.”[5]

They also underscore how material objects can illuminate other people and times in ways not possible via digital images. Most of us take for granted the dizzying pace of technological change. We may overlook how the physical format (article, book, text message, scribbled note, screenshot, clear versus unclear scanned image) can impact our understanding of something’s “content.” As artists have always noted, content can’t be separated from form. In many ways, these pamphlets represent in and through their physical format — portable, hurried, immediate — the “gloves-off” and urgent nature (at least from the author’s point of view) of what they contain.