Greetings! It is hard to believe how quickly the last few weeks of my internship at the Burke Library Archive have flown by. I suppose it is because the experience has been educational, interesting, and fun. So far, I have met several warm staff members, and have appreciated the nuggets of wisdom thrown my way. Under the guidance of Brigette Kamsler, I have learned how to process two collections, and am finishing up my third. I have also had the opportunity to attend the Mid-Atlantic Regional Archives Conference (MARAC) in Boston where I met wonderful peers and gained valuable tools and advice for working in the Archival profession.

In my first few days at the Burke Library, I was somewhat anxious and excited at finally putting theory learned in class into real-life practice on actual materials! In the past 8 weeks, however, those anxieties quickly dissipated, as I have processed three collections of the UTS Record Group Series 1. This series contains the records of faculty and students of Union Theological Seminary. It has been thrilling to handle these incredible documents that once belonged to faculty and students who had a profound impact in the theological world. The three collections I have processed so far from the UTS records group were made possible by a grant from the Henry Luce Foundation.

The collection I am currently working on is the Henry Smith Leiper Papers. Dr. Leiper attended UTS from 1914-1917. Leiper was also very active in the Student Volunteer Movement. Leiper planned for a career as a missionary which led him to China and other parts of Asia. Upon returning to the United States, he served as secretary for numerous organizations, among these the Federal Council of Churches (FCC) and helped create the World Council of Churches (WCC). Leiper was considered to be an international religious leader, and therefore spoke at many religious functions, one of which was the Convention of United Church Women in 1956 as announced in the Ocean Grove Times.

The bulk of the records were created during Dr. Leiper’s time as Secretary of the FCC,  and capture his (and his religious peers) response to the anti-Semitism and other atrocities that were occurring in Germany starting as early as 1932. These letters and articles are quite moving– they tell the story as it was unfolding in Europe, and Leiper’s and his peers efforts to enlighten religious and political leaders in the United States about the devastation. Telegrams and radio addresses on the subject of the Church crisis in Germany (and other countries within Europe), can also be found within his papers. One such telegram, dated November 21, 1938, was sent to the Honorable George Gordon Battle to enlist his support as representative of the Provisional Council Against Anti-Semitism:

Leiper was a prolific writer and published many articles in various newspapers. Many of these articles are contained in this collection in the form of clippings on subjects relating to what was happening in Germany and Europe during the 1930s: Nazi Propaganda, speeches. These papers are an incredible collection of materials about the fate of the Church in Germany during the Second World War, and the efforts of the FCC to bring the issues to the public and help in relief for victims of the atrocities being committed in Europe. This collection was originally processed almost 20 years ago, and I was able to go through the collection again and re-house the materials into acidic-free folders and boxes. I also enlarged the collection from 9 boxes to 13 boxes, as much of the material was overfilled in the original boxes. In addition, there were several fragile items that needed to be marked fragile on the Finding Aid (FA), the document that enables researchers to determine what the collection contains and whether it is valuable to their research. I maintained the order in which I found it, and just gave the folders more specific titles in some cases to make finding materials easier for users.

I will leave you with an image of a document from the collection that conveys in 8 questions (it is unclear who wrote it) what Leiper and other Church leaders in America and abroad were grappling with respect to the German Church under the Nazi regime: 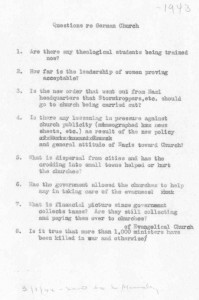 As I take in this incredible collection of documents, it really amazes me the breadth of his– and others– accomplishments to help those persecuted in Germany and elsewhere. Holding these documents in my hands reminds me again why I decided to get into archives in the first place.

I look forward to the last few weeks of my internship at the Burke Library. Thank you for reading!