The Spanish Inquisition Records, 1728-30, records the full trials records of Juan Panis of Zaptero de Viejo accused of heretical blasphemy in Barcelona. The charges are for “Blasphemy Against the Pope, Benedict XIII, on the occasion of the Papal Jubilee of 1725; Against the Sacrament of Mass and Confession; Blasphemey against the Sixth Commandment; and Being a blasphemer and denier of God and the Holy Catholic Faith.”

The Manuscript is a commonplace paper-book that is used for the practical purpose of bureaucratic record keeping. The book is twelve and a half inches high, nine inches wide and two inches deep. There is no cover nor back. It has two hundred and twenty pages and all the pages except one are made from handmade linen paper as indicated by its deckle fore-edges. The pages are stitched together as different testimonies are inserted as the case progressed. Consequently the spine is frayed, and at parts of the book where sections have been inserted it also appears as if pages are missing.

It was not unusual for the “Books of Hours,” like other medieval manuscripts, to contain illustrations of animals, often in the decorative borders. Though at first glance, these appear to be random and whimsical drawings (of, for example, a unicorn, or a monkey), they, in fact, had theological meaning. In antiquity and on into the Middle Ages, animal species signified particular meaning in the cosmos and were often used to illustrate spiritual lessons. Monasteries used bestiaries (which tended to be didactic) as teaching texts. So too, Books of Hours, including the Book, used animals for symbolic purposes, with the animals acting (like the illuminations themselves) as comprehension or memory tools, and to appeal to the reader. The animals in the Book, like those in medieval bestiaries, are vividly animated and compelling, in essence acting as medieval carriers of subliminal messages by reaching the “oculum imaginationis.” 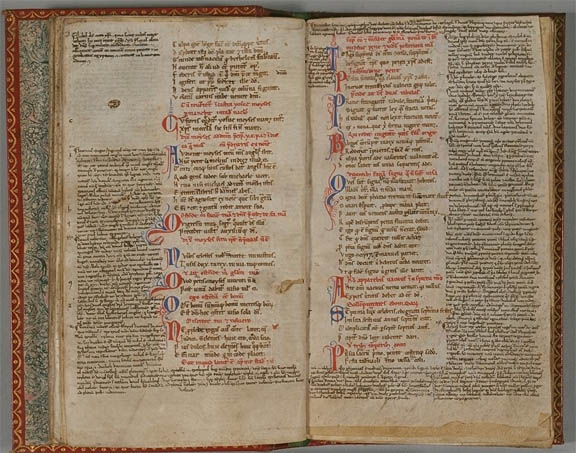 The title of this manuscript is “The Aurora” written by Peter Riga. Born in, France in 1140, Peter Riga grew up in a middle-class household. He studied the arts, philosophy, and theology in the schools of Paris, and later became known as a renowned poet. Influenced by John Gower, he was considered a master theologian and became a regular canon at Reims Cathedral. Aware of his poetic and theologically critical mind, his colleagues encouraged him to draw allegorical parallels of the Pentateuch. Upon completion of this work, “he called his book Aurora, for just as aurora dissipates darkness of night, so too his book, dissipating the darkness and obscurities of the Old Testament, glows with lightning flashes of truth and shining sparks of allegories. And just as the angel, after nocturnal wrestling with Jacob, said to him “Let me go; it is Aurora,” so too, after wrestling with his book, he can say these same words, “Dimitte me; aurora est.” “The Aurora illustrates the medieval concept of Scripture as a ‘fount of living water’ flowing into new channels in answer to new needs. An anonymous preface offers the poem to its readers as more valuable than the Pentateuch: Peter Riga wrote in verse, not prose, and his allegories added Christ’s pearls to Moses’ diamond, a conceit derived from Peter’s own preface.”   This description of Riga’s work shows the profound impact that “The Aurora” made during the middle ages and suggests its success in shifting interpretations of Scripture so that it may be useful and practical giving the current climate and conditions of the time. Due to his poetic genius and critical mind, he also brought new life and appreciation to Scripture. Beryl Smalley posits “Peter forestalls boredom by rhetorical amplification.” 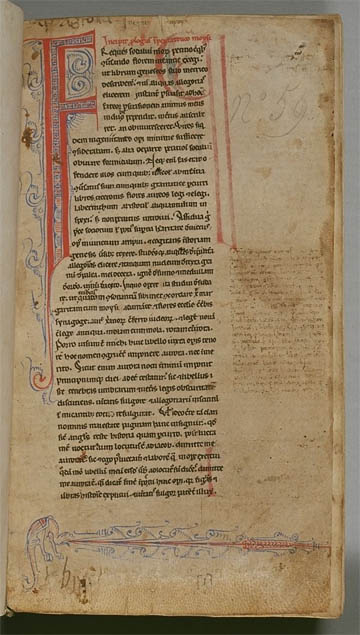 This manuscript of the Aurora sive Biblia Versificata by Peter Riga was copied in Florence between the years 1300 and 1399. It contains 157 leaves of vellum; were the manuscript numbered like a modern text, it would contain 314 pages. Pencil markings added by modern scholars appear in the upper left hand corner of each leaf, creating the only system of reference visible to the modern observer. Though the leaves appear to vary slightly in size – due, perhaps, to the binding process or to the actual dimensions of the vellum – each leaf is approximately 240 x 40 mm. The texture of the vellum ranges from thick and stiff, like a piece of construction paper soaked and dried, to a membrane-like quality so delicate and thin that it is slightly transparent. The color of the vellum also varies. Some leaves are the off white of a modern textbook page (f.18v); others have yellowed the way one might expect in an ancient text, with darkened edges and curling corners (f.63). Some appear to be stained: the color is uneven and splotchy, ranging from off white to light brown (f.29). Perhaps most striking to the modern eye are those leaves that were not scraped thoroughly enough to remove the hair follicles of the animal skin, so that the leaves are speckled with black spots, no larger than pinpricks, so numerous and close together that the vellum appears to be solid gray from a few feet away (f.19v). On some leaves the spots are larger – around 2 mm – and therefore remain visible at a distance (f. 27v). 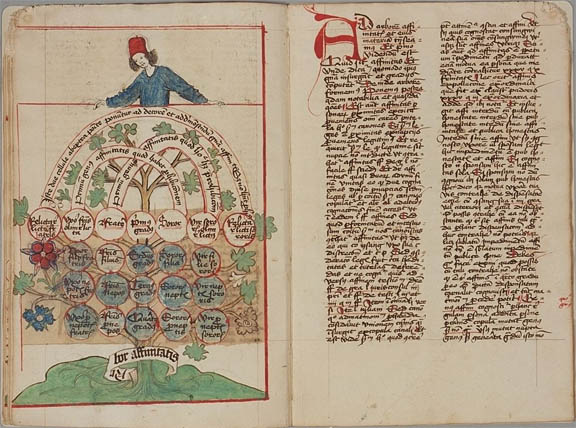 Johannes Andreae did not invent the ideas of the Trees of Consanguinity, Affinity and Spiritual Cognition, but he did create these glosses to reflect the canon law understandings of Pope Boniface VIII’s decretals. We can see in the pictures that all three drawings have to do with the authority of the Catholic Church, as evidenced by the Pope’s tiara on the Tree of Consanguinity, the Bishop’s miter on the Tree of Affinity, and the Cardinal’s hat on the Tree of Spiritual Cognition. The idea of writing down canon law was not new, even laws of consanguinity. As early as 615 CE Isadore of Seville produced an analysis of the blood-lines in families as part of his Etymologies. But the arrangement of this knowledge in “trees” was something that gained more popularity in the 12th and 13th centuries.   What we can know about the work Johannes Andreae did was that his glosses for Liber Sextus Decretalium were published in 45 different editions between 1473 and 1500.   It is understandable then, that they would have had a rather wide circulation, and been an interesting challenge for anyone hoping to practice their scribal work.

Johannes Andreae lived during a time of the rising influence on canon law within the church, and his professional credentials as a canon law expert who taught in Padua and in Pisa well-prepared him for employment as one of Pope Boniface VIII’s most well-known canon lawyers.   Boniface VIII himself was an expert in canon law, and used his legal knowledge to help administer and extend his power as pope. “Outside of the pages of poets and historians, his [Boniface’s] activities were detailed minutely by an army of lawyers. He spoke for himself through his resounding bulls, for loving the law above all other intellectual activities, it was through it that he best expressed himself”   The increasing importance of canon law created a whole class of lawyers, “portrayed here on the fourteenth-century tomb of a professor in the legal faculty of the University of Bologna.” Johannes Andreae was one of those foot soldiers, adding a gloss of the trees in this manuscript to Boniface’s collection Liber Sextus Decretalium—to “the five books of the official collection made by Gregory IX he added in 1298 a sixth, the Sext, which brought the Church’s law up to date. The new book included no less than 251 of Boniface’s own decretals.”   Pope Boniface VIII’s legal advances also won him “innumerable enemies” including reproach from Dante in his Divine Comedy.   Pope Boniface VIII was well-known for his conflict with King Philip IV which led to Boniface’s termination. But this conflict can also be seen as a conflict between canon law and civil law. “Canon law was papal law, and the growing dominance of law within the Church was a key factor in the establishing of the papacy at the heart of the Church.”   The rising development of civil law would take Pope Boniface VIII and his canon lawyers like Johannes Andreae by surprise.