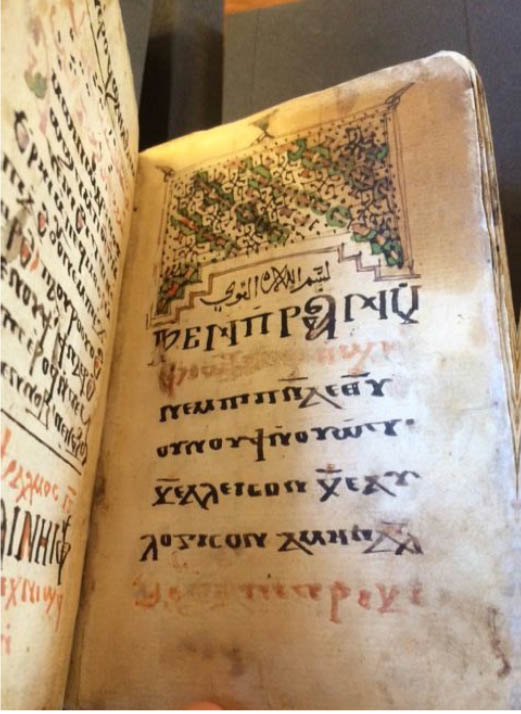 The Psalter, found within the “Coptic Manuscripts Collection” of the Burke Library, could also be labeled “A Liturgical Handbook.” Coptic Psalters are traditionally a collection of one hundred and fifty-one psalms. An additional psalm is contained in the Coptic tradition written specific for David when he combated Golaith (Kamel 205). The existing information regarding this specific book is sparse. Filed under the call number “Coptic 1 (and Arabic),” the worn, brown leather binding of the Coptic Liturgical Handbook is as nondescript as present codicological information. The cover of the manuscript measures 6.5” x 4.25”. The hand-laid paper on the inside spans 6.25” x 4.25” with a depth of 1.75”.3 Exposed end-bands hold the manuscript. The blue spring found within the end-bands appears intentionally visible.4 To conclude this description of the external physical features of the Psalter, a hole on the back cover should be noted. An examination of other bound Coptic Manuscripts supports the assumption that the hole once functioned to tie the book to a table (Kamel 7). 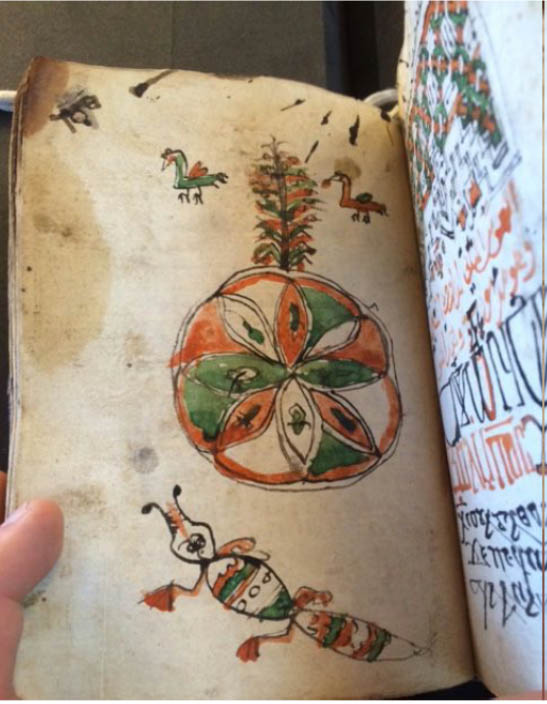 The process of translating the Psalter led to less knowledge about the documents content, but indicated further clues regarding the Psalter’s origins. With my A Simplified Coptic

Dictionary (Sahidic Dialect) in hand, I attempted to decode the title page (figure one). Two unfamiliar letters, however, halted this process. By combing other resources I found these letters, an alpha and gamma, in the Bohairic dialect. Bohairic Coptic is known as the Memphitic dialect.

These letters do not appear in the same form in the Sahidic dialect and thus this finding altered my method. Upon further investigation, I found out that Bohairic Coptic had replaced the

Sahidic dialect as the official liturgical language of the Coptic Orthodox Church since the 11th century (Budge xiv). The world around the text began to expand. The realization that the Psalter is written in Bohairic Coptic inspired further inquiry regarding the manuscript’s origin. Since the Memphitic dialect derives from the western Nile Delta, I posit this region could be the document’s source. Furthermore, there are a number of watermarks sprinkled throughout the pages. The damp conditions of the western Nile Delta have hindered the preservation of the area’s earlier texts, but later documents—like this one —survive (Kamel 5). Finally, while interest Sahidic Coptic has increased due to the discovery of early Gnostic Christian texts Nag Hammadi, the Bohairic dialect proves more valuable for later texts. 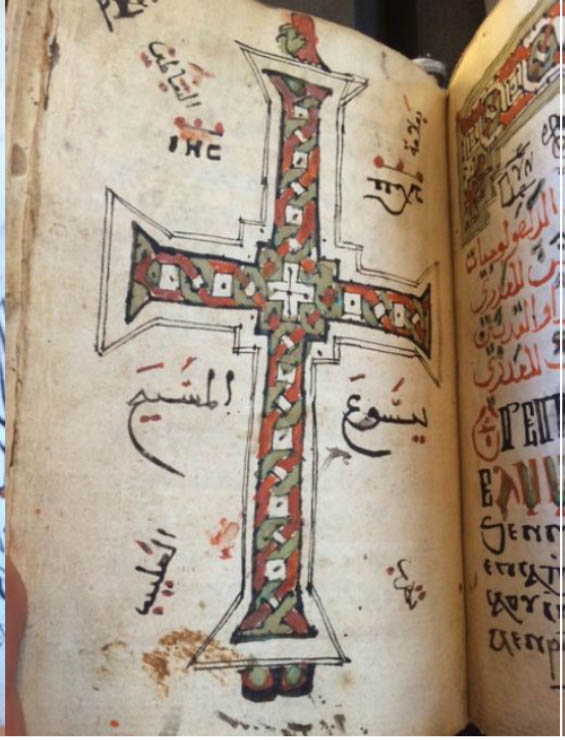 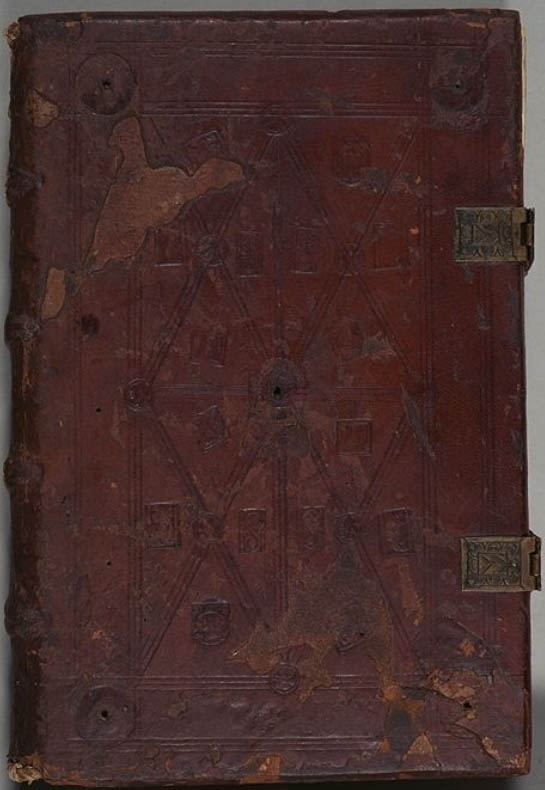 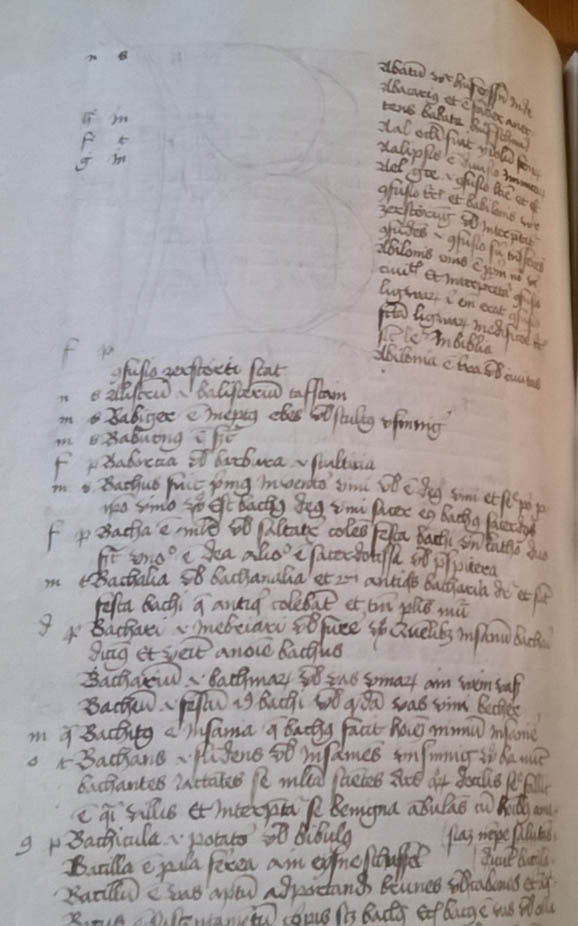 With call number UTS MS 024, this manuscript forms part of the Leander Van Ess (1772-1847) collection in the Burke Library of Union Theological Seminary (UTS). The manuscript acquired two years after the founding of UTS in 1836, is a 249 page Latin to German Dictionary, with its origin of writing dating back to 1463 in Germany. Although no reference is made about the original owners specifically, Gatch reports that in 1500 the manuscript was owned by Sebaldus von Plaben of Nürnberg (Gatch 158-9). It follows the manuscript tradition of German texts of the Middle Ages, demonstrating particularly unique features both in binding and text writing style (Ricci 1643). This codicological description will seek to uncover some of these unique features, in addition to gaining some understanding of the region, reasons and purpose for the writing of this manuscript.

This hand written manuscript written in Cursiva script, and lacking imagery and color inside the book, strongly suggests that this dictionary was used in a scholarly way. It was not meant for a general readership, but for those engaged in research. The region from which the owner Sebaldus von Plaben of Nürnberg, was known to be a conservatively and free Lutheran city, where authorities allowed evangelical preaching in 1521 (MacCulloch 616, 630). Depending on the depth of the preaching, it can be imagined that exegesis of biblical text may have required research and translation from Latin to German. The Free City of Nürnberg would have been fertile ground on which to expand and expound ideas of Lutheranism through preaching in German. This was a time of reformation in Europe, where writing and knowledge of scripture fueled Protestant ambitions (Ozment 257, 463). Outside of the fascinating history of the late 15th and early 16th century, the other point of interest for this author was in the technology used to produce the manuscript. Particularly the use of cords in the binding of the paper and the use of parchment waste to strengthen the manuscript. The thought of further study on where the waste came from and what books were they first published in, if any, posed interesting thoughts for pondering. The necessity for clasps and hinges also was of interest, and it is hoped that further research would lead to better understanding of the reasons for these types of ornaments during this time. 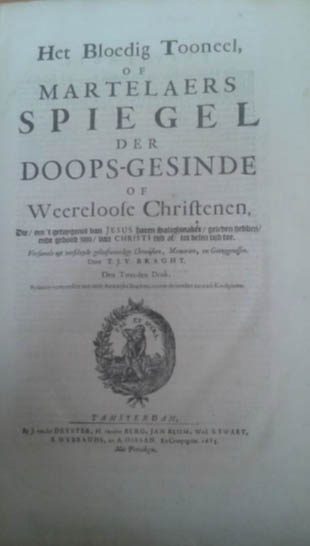 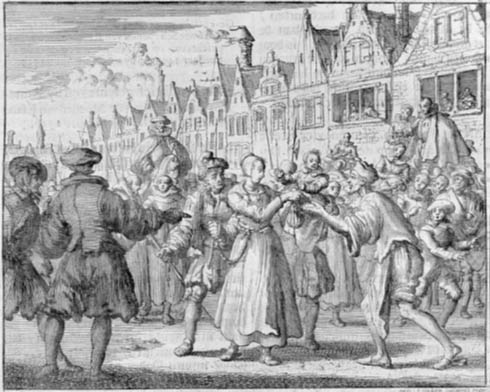 The Martyr’s Mirror was first published in Dutch in 1660 and documents the testimonies of Christian martyrs. The second edition appeared in 1685 and includes additional content as well as engravings not included in the first edition. The Burke Library at Union Theological Seminary in the City of New York contains a copy of this magisterial 1685 edition of the Martyr’s Mirror, and it is this text to which I will provide a codicological description. The full title of the book is The Bloody Theater or Martyrs Mirror of the Defenseless Christians who baptized only upon confession of faith, and who suffered and died for the testimony of Jesus, their Savior, from the time of Christ to the year A.D. 1660. Second only to the Bible, the Martyr’s Mirror is held in utmost prominence among Anabaptists, especially Amish and Old Order Mennonite. The term “Defenseless” is in reference to the pacifist convictions of the Anabaptist martyrs.

The 1685 edition was published after van Braght’s death by a group of Anabaptist investors. This edition included 104 superbly crafted copper etchings by the renowned Mennonite artist Jan Luyken. There are 49 etchings in Part 1 and 55 in Part 2. Each of the etchings captured the climactic moment in a particular martyr story. According to Roth, “The Luyken etchings were not only a stroke of marketing genius, making the 1685 much more popular than the earlier version, but they also transformed the way later generations would encounter the volume” (Roth). Luyken’s powerful images provided a simple way to understand and interpret the massive and complex martyr stories, making the text much more user-friendly, although these images perhaps simplified the depth and nuance of many of the stories. 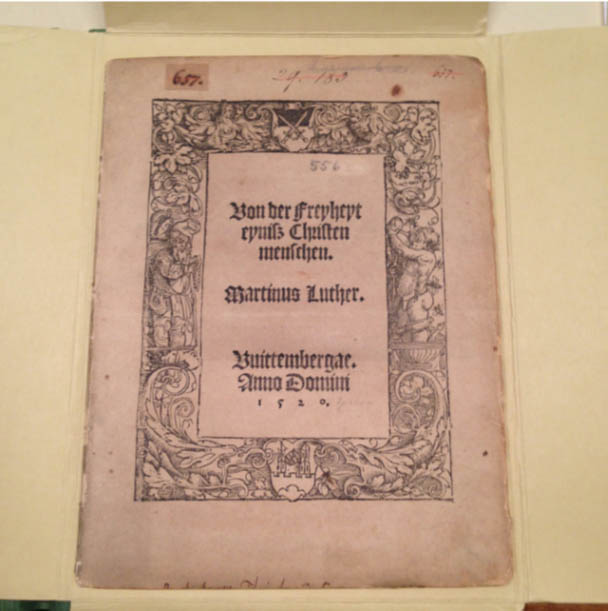 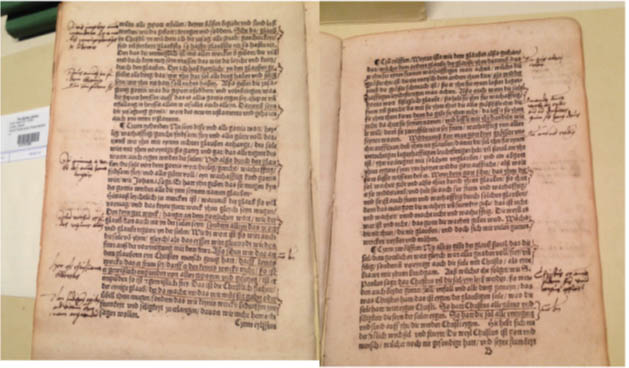 These Luther pamphlets are two copies of the same treatise titled “Von der Freyheyt eynis Christen menschen” which translates to “On the Freedom of a Christian”. Both pamphlets were printed in Wittenberg, but by the different printers, which was very uncommon. In November of the year 1520 is regarded as an important year for the Reformation where Martin Luther created many pamphlets that opposed the abuse of the papacy. Each pamphlet contains leaves measuring 20.5 centimeters tall and 15.5 centimeters wide. These pamphlets were printed on paper with small black text and paragraph markers at the beginning of each paragraph. For the Luther, Christian freedom of faith from the papacy is essential to the life of a Christian. Addressed to Pope Leo X, Luther points out the abuse of power surrounding the Roman Curia and articulates his Reformation concept of justification by faith. This meant the freedom of a Christian was not dependent upon good works and the practice of the sacraments but on faith and the grace of God alone. Luther believed this liberating idea outweighed Pope Leo X’s papal authority. For Luther, the inner spirituality of a person is saved by faith alone and those who are saved by faith therefore engage in good Christian works. These works help the neighbor and discipline the soul.

The early years of the Reformation, the supply of pamphlets needed to reach a large audience with its message, therefore there was a major turn to the vernacular (Edwards 21). Only a small portion of the German population could read and an even smaller portion could read Latin. This drastic turn to print in the German language made the pamphlets more available to the small population that was literate. The pamphlets themselves were resolutely addressed to the laity hence the switch to the vernacular (Edwards 81). Due to the popularity of Luther’s pamphlets there was massive printing and reprinting of his works. This meant that because of the amount of pamphlets being printed it actually saved money to print from one’s actual town rather than to send for the products that were being produced in a much larger printing town. This may explain why there were two of the same pamphlets printed in the same place in the same year by different printers. Luther’s popularity was growing and the demand for his writings was so great that two printers were used. Also since Wittenberg wasn’t a big printing area like Augsburg or Leipzig, it was necessary for two printers to print the work. Since Luther brought Melchior Lotter to Wittenberg to print his works, there was an obvious necessity demand for another printer. 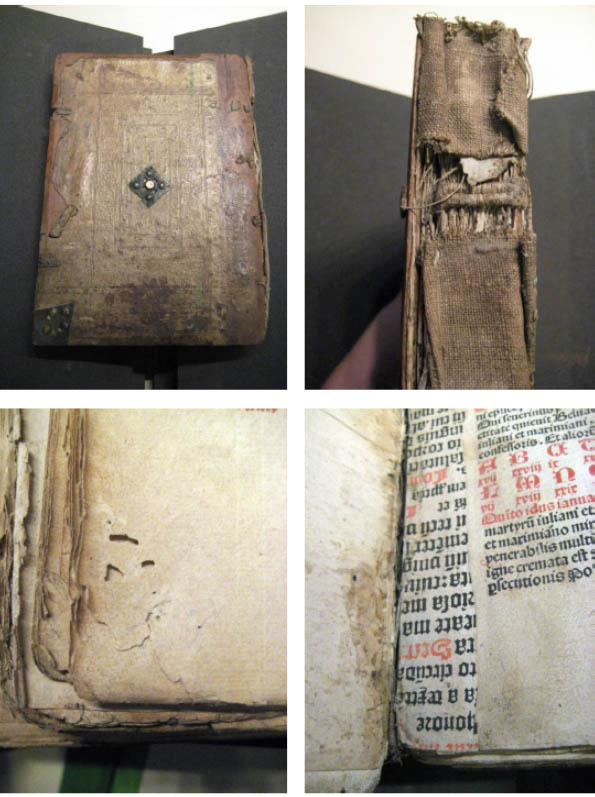 This necrology originates from an unnamed Benedictine convent in the diocese of Halberstadt, near Hadmersleben. The convent was affiliated with a double cloister located in nearby Huysburg. Double cloisters, or double monasteries as they are also called, attempted to create a symbiotic relationship between communities of monks and communities of nuns. Women in particular had to rely on ordained men for practical and spiritual needs, from representation in public and financial matters to celebration of the mass and administration of other sacraments (Griffiths 5).Two other necrologies of Hadmersleben are known (Digital Scriptorium). This paper seeks to describe the book that contains the necrology, speculate on its uses, and rediscover the identity of an unnamed community of women who created and stewarded this book for centuries.

The necrology dates from the 15th century with entries up to 1710. It does not stand alone, but is bound together with a martyrology (1v-52) and the Rule of St. Benedict (53v-68)—I will refer to these documents as Part 1 of the manuscript and the necrology as Part 2, which will be the main focus of this paper. However, there are some interesting things to note first about the documents with which the necrology now shares its present binding. Both documents in Part 1 are printed, in contrast to the various styles of handwriting we will find in Part 2. The Digital Scriptorium notes that the martyrology is a defective document, missing its first two leaves (Digital Scriptorium). The entire book is heavily worn, with ruffled or torn pages, stains, and various annotations. However, the edges of the pages on the Rule of St. Benedict are noticeably more ruffled, possibly indicating that this section was referred to most often by the monastic community. There are numerous examples where the book has been repaired with scraps from a missal printed in red and black. The expense of other text for the preservation of these pages suggests that all the documents in this book, not just the Rule, were of paramount importance among other texts in the convent library.