I started at the Burke Library a little over a year ago.  Not coming from a theological background, I was a little intimidated. However I quickly saw how my background in public history and public services could help do effective outreach to promote usage of the amazing materials in our special collections by Union students. It was during my first Student Senate meeting where the new senate officers announced that they would be adopting the theme #LoveInAction.

Based off of the infamous words of Union professor, Cornel West, “Never forget that justice is what love looks like in public,” #LoveInAction embodies perfectly the activist spirit held by the students, alumni/ae and faculty at Union both today and yesterday.  Seeing an immediate link between Union’s archives and this sentiment, I saw the potential in getting students aware of Union’s history not just through other’s words but through their own research experiences.  With the approval from the Burke Library’s director, Beth Bidlack, I set upon recruiting Union students to curate the library’s display cases that would help begin to tell of Union’s activist history.

Timothy’s exhibit, which is currently on display until September 28, 2015, focuses on the East Harlem Protestant Paris (EHPP).  Created by Union students in 1942 EHPP was an interdenominational ministry that provided leadership in the development of community life as served as an excellent example of an ecumenical ministry in a local, inner-city setting.  For his exhibit, Timothy dug into  the EHPP (1942-2007) records held at the Burke Library. 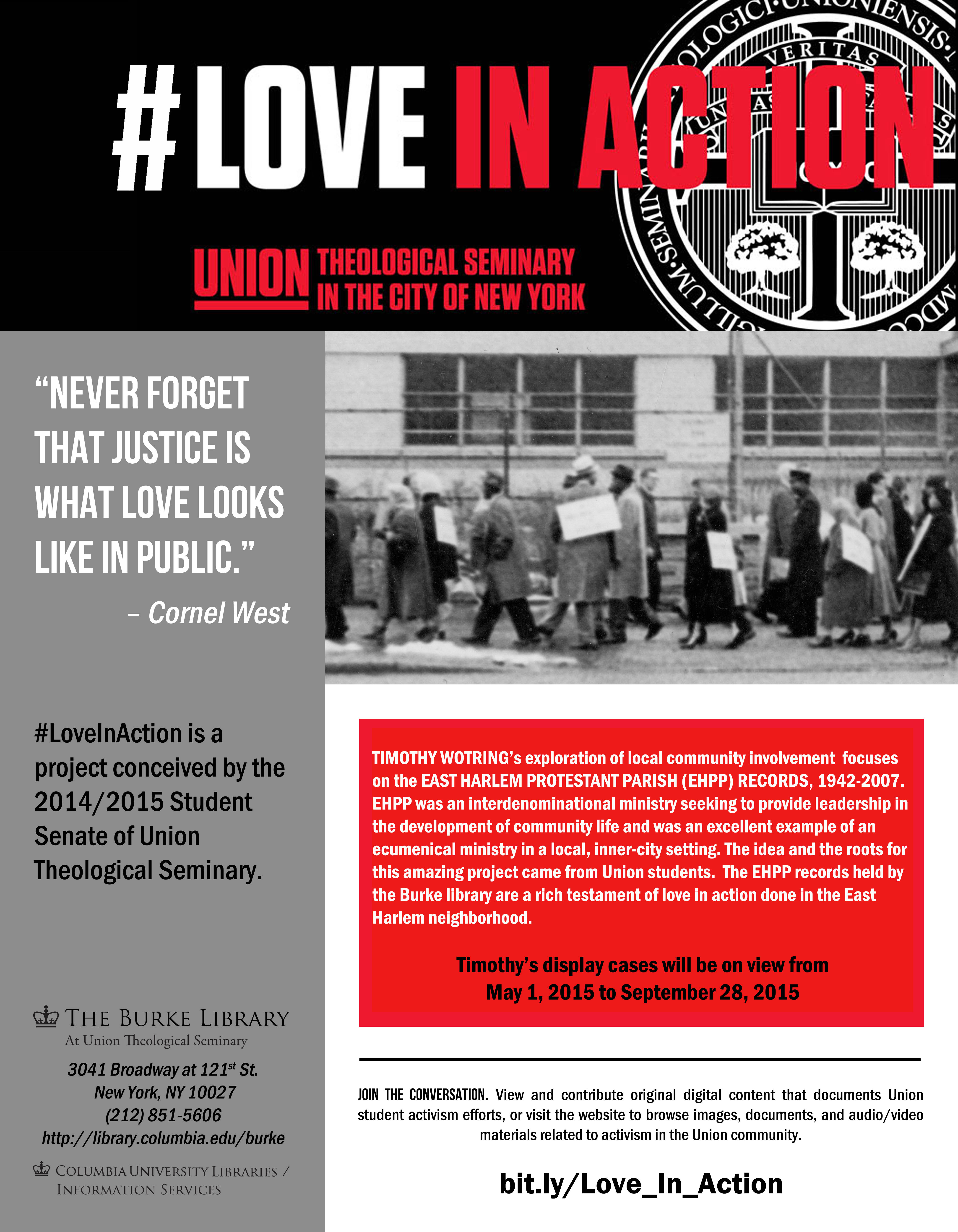 Up next will be Benjamin’s exploration of activism in action, and will focus on Union’s archives relating to student-led activism.  Primarily focusing on the time period between 1922 through to 1969, his cases hope to show the major shift in the civil rights narrative that occurred in the mid to late ’60s.  Benjamin’s exhibit will be on view from October 5, 2015 to November 30, 2015.

Carolyn has been researching forms of activism within education and has been sifting through the student driven and led Student Interracial Ministry (SIM) records (1960-1968) and archives relating to the Free University and the Union Commission. Carolyn’s exhibit will be on view in January 206 through to April 4, 2016.

Each exhibit also has a program tied to it.  For the unveiling of Timothy’s display cases, the Burke Library hosted a panel that was organized by the student curator and which brought 3 Union folks together, all of whom are at different points in their activist careers, to discuss the guiding philosophies of the EHPP founders.  Benjamin is working with Burke Library staff and the Union alumni/ae liaison to put together a panel of Union alumni/ae and current Union students to reflect on how their education here at Union is preparing and/or has prepared them for a career in activism.  This panel is to take place in the main reading room of the Burke Library on Friday, October 9th from 2-3:30pm, and is part of the roster of fabulous events planned for Union Days 2015.

If you would like additional, more detailed accounts of this project please check back here as links will be added to articles that are slated for publication shortly!

We are looking to carry on this project for at least another round, and are on the look out for new student curators. If you are interested and are a current Union student please reach out to us by email:

The next round would start in early January 2016 and run through the spring semester.  The time commitment would be at least 3 group meetings during the semester as well as individual research sessions.

Even if you feel you might not have the time to commit to being a student curator you can contribute to the project in other ways.  In order to help students document all of the work they are doing that celebrates the theme #LoveInAction, we have created a website that invites members of the Union community to contribute their personal photos, videos, writings, etc.