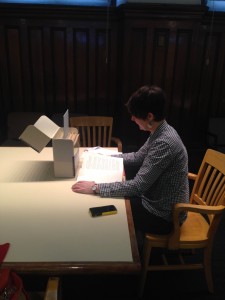 As I sifted through the materials in the Burke archives, reading student publications and looking at pictures that were over forty years old, I kept recognizing my classmates in these relics from our predecessors. My project was tracking a series of student-driven movements in the 1960s and 1970s that radically transformed the academic program and governance structure at Union. One of those, the Free University of 1968, began with a late-night call to mobilize seminarians because the police were moving in on protests across the street at Columbia. It was after the end of the semester, and well after midnight, but the students rallied and turned out to support the protestors. That happened my first year at Union, when the Occupy Wall Street encampment in Zucotti Park was raided. That night a group of us had settled into the Social Hall with cups of coffee and end-of-semester papers to write. But within fifteen minutes of the first tweets announcing the raid, we were all headed downtown to see how we could help. It happened again in 2014, as the Union community turned out en masse to participate in #BlackLivesMatter protests across New York City.

Back in 1968, after a night of supporting Columbia students in their confrontation with the police Union students came home and looked at their own community. At Columbia, students were protesting major justice issues: links between the university and the institutional apparatus supporting the Vietnam War, as well as the gentrification of Harlem. But Union students recognized that their own institution, too, was complicit in perpetuating injustice. The last week of classes was canceled and replaced by what was called the Free University as the entire campus instead spent the week investigating Union’s problems and making a plan for moving forward. This balance between protesting injustice outside our walls and engaging in serious soul-searching within them is also one I recognize in my classmates. Union in Praxis, activism surrounding the Jackson Mitchell Chair, the Latinx Working Group, #WhoseUnion – all of these belong to the same tradition as the Free University. And like the movements I’ve seen in my time at Union, the Free University was a messy endeavor. Some students were frustrated that activism was interrupting their studies, and considered the Free University a waste of time. There was tension between those whose energies were focused on issues at Union, and those who were pulled toward solidarity with the Columbia protestors.

The Free University ended with the academic year but the issues it raised continued to be addressed, first by a working group called the Union Commission and then by the Union Assembly, a body of faculty, students, and staff that governed the school for five years. Major changes occurred during this time: the switch from an A-F grading scale to our current system, closing the School of Sacred Music, replacing the B.D. with the M.Div. and the Th.D. with a Ph.D., and Union set a goal of recruiting and admitting students and hiring faculty, “so that Black persons will number at least one-third of the total… and so that women (including Black women and those of other minorities) number at least one half the total.” Here, too, I recognize my classmates in the dozens of past students who participated in the necessary, but rarely glamorous, committee work of negotiating and discerning a better path forward for the seminary on first the Union Commission, and then the Union Assembly. Working alongside faculty, administration, alumni/ae, and staff for five years, students contributed to major changes in how Union functions. All of this work – from confrontations with police in the streets to policy changes within Union – is activism. All of it is #LoveInAction.

Carolyn Klaasen, among many things, is a current PhD student at Union Theological Seminary and one of the student curators for the library’s #LoveInAction project. Carolyn’s exhibit is currently on display through to May 16, 2016 on the 1st floor of the Burke Library. Her exhibit is a look into activism in education exploring the archives of the Union Commission and Union Assembly, and the Student Interracial Ministry, both of which were student-driven.  The records of the Union Commission and Union Assembly document the school’s history roughly from 1968 to 1974 and are housed within the Union Theological Records, 1829- held by the Burke.  The Student Interracial Ministry Records, 1960-1968, also held by the Burke, are a testimony to a student-run ministry in which students, congregations and community members from racially diverse backgrounds came together to be part of a radically different and truly immersive hands-on approach to ministry education.