Hello Burke world! I joined Union’s library staff this February, filling a vacant Project Archivist position whose previous occupant guided the successful processing of the William Adams Brown Ecumenical Library Archives, the Missionary Research Library collection, and more with the support of the Henry Luce Foundation and other grant-funding organizations and individuals. I’m originally from New Mexico (a place with an aridity that I’m sorely missing during my first summer on this swampy island), and recently completed my M.L.I.S. in Archival Studies from McGill University in Montreal. Coming into this community has been in many ways a rigorous crash course in ecumenical studies, but happily a smooth process of folding into and keeping step with the everyday work of a small academic archive situated in an expansive research university. The learning curve I’ve ridden this spring has been notable given my status as a new archival professional with interests both in academic librarianship, special collections and rare books and archives. Prior to coming to the Burke, my background in archival practice had been situated in the U.S. and Canada, and primarily saw me leading small survey and processing projects in cultural heritage, art and academic settings with an acronym-riddled arsenal of best practices and archival theory at my disposal. 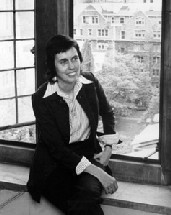 Phyllis Trible at work. Trible’s archive consists of text-based, visual materials and realia reflecting Trible’s historic career in Biblical criticism, feminist studies and the Old Testament. Her papers bridge the UTS Archives to the Archives of Women in Theological Scholarship, and is an actively growing collection now available for on-site consultation.

The extent of my religious studies acumen prior to joining the Burke was limited to my middling knowledge of the Presbyterian beginnings of the small Midwestern town where I lived during college, the particular dryness of Eucharistic hosts during my Catholic adolescence, and a fairweather interest in the eternal consequences of my meager mortal actions. I come from a literary studies and critical theory background, and have always been drawn toward the nuanced, less visible ways in which people and communities of people make sense or chalk up their experiences of this life, those experiences of religion and spirituality that respectively become occasions for world-making, diasporas, rituals and art forms that seem endlessly abundant in relief and hope. Part of what compels me toward the humanities, history and narrative has been the particular privilege and work of acknowledging my own ignorance of the world beyond my own, the limits of individual perspective, but also of the ways in which knowledge is produced to bind our subjectivities to one another. In the process of memory-making and historicization, I am equally interested in the erasures and violences that also constitute a part of the ways in which we understand our spiritual and social worlds.  Theology, perhaps more than any field I’ve taken up so far in my life and nascent work, attests to this pervasive knee-jerk desire to balance sense-making with reverence, critical thought with faith, silence with articulation. This process of coming to know, even in silence and subjectivity, is what drew me to library science, and archival practice in particular.

The projects that met me at the Burke did not disappoint. As the Project Archivist responsible for the processing, housing, and long-term preservation of the UTS 1 Archives – an aggregate of archival collections stemming from faculty, alumni, and other Union-affiliated individuals acquired by the library – I have become a sudden steward of a world steeping in interdisciplinary, interdenominational discourse. From my first day in the library, I realized that I had entered a space that, though a slim five-block walk north of Columbia’s Morningside Heights campus, is unique in its historical and academic context. As one of my colleagues told me on admiring the crucifix-emblazoned doorknobs leading into our on-site archival space, “The divine is in the details”. It’s indeed astonishing to be a custodian of archival collections outside my formal background and to learn so quickly and richly about the haptic space the seminary is situated in, the gargoyles that greet me in the stairwell, the filigreed doorknobs evoking Union’s denominational past, the engraved edifice on the neighboring Jewish Theological Seminary (…“And the bush was not consumed”), or the limestone gauntlet of the neighboring Interchurch Center (a.k.a. the God Box).

The variance and allure of the people and spaces I’ve had the privilege of connecting with since arriving at the Burke has been matched only by the archival collections themselves. With the invaluable assistance of library school interns, Columbia and UTS student employees, and the support of my colleagues and mentors, I have been bolstered in processing the papers of people like Phyllis Trible, a beacon of Union’s community and bracing feminist Biblical scholar; Max Coots, a Unitarian Universalist minister and Union graduate whose joint Master’s in religious education in 1953 between Teacher’s College at Columbia and Union was fulfilled with a brilliant full-color cartoon thesis depicting the politics of post-war activism, racism and redemption through the UU tradition; and the papers of Bob Seaver, Union’s beloved late professor of Speech and Drama, whose papers include audiovisual evidence of his singular teaching style as well as his extensive work in religious drama in the ecumenical and theater communities. Perhaps one of my favorite things about Seaver’s papers so far have been his extensive notes used when preparing for his courses in preaching. In these notes, Seaver’s approach to vocal exercise and tuning the human voice become a form of scrawled language poetry. One undated note card reads:

We’ve been dealing with how to release breath
F U L L Y
Breath — The source of sound
Work on the jaw
Tongue, concerns
Throat
How to free the channels
Through which sound travels
Jaw — widens the exit
When some deep emotion
Is the impulse for sound 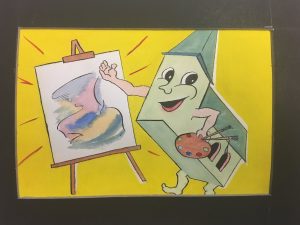 Two frames of Max Alden Coots’ cartoon thesis submitted in fulfillment of his M.Div./M.Ed. in 1953 from Teachers College and UTS. Coots, an artist and Unitarian Universalist Minister, is one exemplar of the visually and conceptually compelling approaches to religious education that Union alumni and faculty have practiced throughout their careers.

Processing collections coming from individuals like these is not only a privileged sort of intellectual labor, but one that begs to be curated and made accessible to researchers beyond the auspices of Union’s immediate audience. Drawing on the talents of our in-house staff and from the support of our larger organization, I feel confident that new knots of researchers, students, scholars, and armchair theologians will find themselves as intrigued by the gems to be found at the Burke as I have become only six months into this new role through a mix of digital curatorial work, on-site exhibitions, cross-institutional collaborations, and streamlined practices for uploading and curating finding aids.

As I scythe through the work accomplished and the projects that I’ll undertake over the next two years, I am becoming pinchingly aware that I’ve just begun to skim the surface, to scratch the bed of all the intellectual and physical labor that lies ahead. As we approach our goal of 30-35 linear feet of processed archives per month, and as the steamy heat lamp of New York City summer settles in, I could hardly feel more energized to embark on the remaining mountain of collections. Where do you even begin to excavate the history of glory? Flick light, switch on dual monitor. Select Start.