Reverend Harry Emerson Fosdick, a Union Theological Seminary graduate and professor as well as the founding pastor of Riverside Church, was a pioneer of liberal theology, an outspoken opponent of racism and injustice, and a fierce pacifist. The Burke Library is very fortunate to have been the archival recipient of Rev. Fosdick’s personal papers, some 67 boxes containing sermons, lectures, correspondence, drafts, reviews, and bibliographic material spanning his life and career. (For more information on the Fosdick collection at the Burke and a link to its finding aid, see here.) Given Rev. Fosdick’s importance as an American theological leader for more than half a century, the papers in his archive are all fascinating and worthy of examination but for the purposes of this post I chose to focus on his support of American servicemen and women during WWII in spite of his pacifist objections to war.

Having witnessed the horrors of WWI firsthand on a visit to the European trenches under the auspices of the Y.M.C.A., Fosdick returned to the United States with an altered view of his theology and an impassioned commitment to a lasting peace. In a 1921 sermon, “Shall We End War?”, Fosdick preached that “we cannot reconcile Christianity with war anymore,” as war continued to divide rather than unite the world. Fosdick continued to rail against war from the pulpit, refining his pacifist stance and leading the swelling Protestant anti-war movement in the 1920s and 1930s. His pacifism reached its apotheosis on November 12, 1933, when he delivered an impassioned sermon from the Riverside Church pulpit, “Unknown Soldier,” concluding dramatically by declaring, “I renounce war and never again, directly or indirectly, will I sanction or support another!” 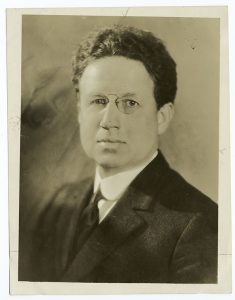 When WWII erupted in 1939, Fosdick remained a steadfast pacifist, and even after the bombing at Pearl Harbor in 1941, when anti-war sentiment plummeted in the face of patriotic support for American involvement in the war, Fosdick never abandoned his pacifism. In spite of his moral opposition to the war, however, Fosdick and the entire congregation of Riverside Church opened their doors to the U.S. Naval Reserve’s Midshipmen’s School, based at Columbia University, from 1942-1945. In the Fosdick papers, one sees an incredibly warm, respectful correspondence between Rev. Fosdick and Captain (later Commodore) J.K. Richards, the Commanding Officer of the Midshipmen’s School, as the two men discuss how best to support the midshipmen and even what it means to be in the military but not to idealize war.  In one of his earlier letters to Rev. Fosdick, dated March 15, 1943, Captain Richards describes his thoughts on soldiers’ views of war:

“We, of the military, have never idealized or glorified war. Having been trained in war, it is to us a grim, harrowing tragedy; but to safeguard the doctrines of Democracy and our way of life is a sacred trust. Called by our Country to its defense, it becomes a “Sacred Cause.” And we further believe that those of our citizens, who sacrifice themselves for those principles we hold to be self-evident, should be idealized.”

Captain Richards goes on to implore Rev. Fosdick “to help guide and fortify our young fighters; so that when this war is over the peace won will be a proper peace.” In 1944, after receiving a check for $2,000 from Captain Richards to support the church’s community efforts, many of which were aimed at the midshipmen, Rev. Fosdick wrote gratefully:

“We are so happy here to be of use to you, and would so gladly do it from our own funds that we all of us feel as if you ought not to contribute to our budget. Nevertheless, of course, a check of this kind is very convenient in these days when we are trying to carry on a piece of work that sometimes strains our resources, so that I suspect our gratitude will, as last year, overcome our embarrassment. I do want you to know, however, that the privilege of serving the Midshipmen’s School is a very dear treasure to all of us here at Riverside Church. A finer group of men never were gathered together, and anything that we can do for you we do with all our hearts.”

The folder with materials on the Midshipmen’s School in the Fosdick collection also includes letters to and from members of the public who are interested in Riverside’s services for the midshipmen (particularly the Saturday night dances held in the church’s gymnasium) and even clergymen who question how Fosdick, as a staunch and vocal pacifist, could permit the military to use the church, particularly for their graduation exercises. In a letter to Rev. Donald R. Lemkau of Little York, Illinois, dated Dec. 7, 1942, Fosdick defends Riverside’s hospitality to the midshipmen, whom he describes as “grand fellows, the pick of our homes, schools and churches,” and a “magnificent body of American young men; many of whom of course have been fighting and are still fighting a difficult battle in their own consciences with reference to participation in the conflict.” He also refers to a statement published by fellow theologian Dr. Lathrop in a recent issue of Fellowship, “where a pacifist minister must say not, This is my church, but, This is our church, and must recognize the right of his non-pacifist brethren to their judgment.”

At the conclusion of the war, the Midshipmen were so grateful to Riverside for being their home away from home throughout the war that they inscribed a message of thanks at the back of the nave to commemorate the kindness and hospitality shown to them during such a difficult period. Rev. Fosdick, in spite of his unwillingness to support the war itself, was a compassionate and devoted servant to those who served in the war, ensuring that Riverside Church, founded on ecumenical principles, was a sanctuary to all during the trying years of the 1940s. 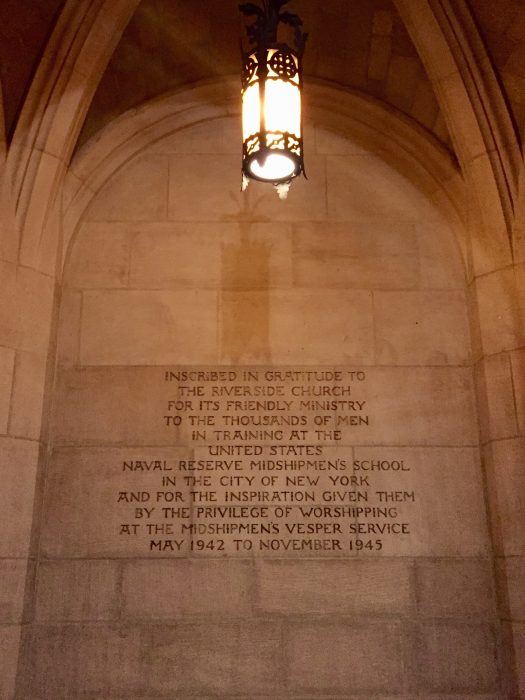 I encourage anyone with an interest in liberal theology, Riverside Church, or Rev. Fosdick himself, to spend some time with this archival collection. I certainly plan to dig in deeper in the near future so stay tuned for more blog posts on one of Union’s most illustrious alumni!

The following blog post was written by Paul Paulson, the Burke’s most recent archival student intern. Paul is completing his coursework in the LIS program at Rutgers University, and saw several projects through the archival life cycle during his semester with the Burke. Here are some of Paul’s thoughts on the other side of his internship experience:

This fall I have had the good fortune of working in the archives of the Burke Library at Union Theological Seminary an apply, in a real world environment, what hitherto had only been theoretical. I had the benefit of taking an archiving class concurrent to my work here, which informed much of this experience. Conversely, my time at the Burke gave salience to issues and concerns we investigated in a classroom environment.

I processed a total of four collections which were all rather heterogeneous. The first were the papers of Dr. Christopher Morse, a professor who spent the bulk of his career at Union and who is credited with creating the Bonhoeffer Chair in Theology and Ethics. His papers represent a rather contemporary collection. Along with printed articles and the like were computer diskettes of varying antiquity. Professor Morse’s papers comprised about 12 1/2 boxes of material which were primarily scholarly in nature. 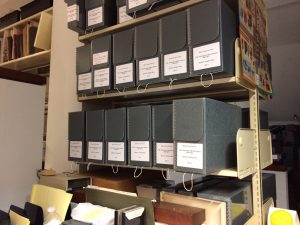 A smaller but no less fascinating collection were the papers of Titus and Fidelia Coan, 18th century missionaries who settled in Hawaii. Titus Coan was very peripatetic, traveling to Patagonia and the Marquesas islands as part of his missionary calling. The papers donated were letters that Titus and Fidelia exchanged between one another. The beauty of the language and the sheer volume of letters the Coans exchanged were quite inspired.

Another small collection that I process belonged to Eitel Proelss, a German born theologian who, like his contemporary Dietrich Bonhoeffer, belonged to the Confessing Church and resisted Nazi influence during WWII. Proelss was sentenced to hard labor but survived the war. Proelss eventually became interested in criminality and began a program at UTS that merged pastoral care with psychology. He also served as the Chaplain of Rikers island for 10 years . His papers offer a glimpse at the thoughts of an individual concerned for well-being of the incarcerated and assured of the redemptive possibilities for criminalized people.

My last collection was that of an individual named Arthur Mason Brown , whose grandfather, Francis Brown, was the seventh president of Union Theological Seminary. Arthur Mason Brown was born and grew up in present day Syria and served in the Navy during World War II. He eventually moved Egypt where he taught at the The American University of Cairo, also preaching at the Maadi Church in Maadi, Egypt. Though he eventually settled in the States, Brown returned to the Middle East for a year in 1971 to teach at the American University in Beirut.  In his teaching years he found himself at a number of different institutions in the States, but spent the bulk of his career at Bates College in Maine. It was there that he suffered a devastating stroke which is said to had triggered a crisis of faith in him. After he stopped teaching and preaching, he devoted his energy to Haiku poems, two books of which are included in the collection. Most of Brown’s archival papers are sermons. These are abundant and a number of them exist in several different versions. It was challenging to fix an accurate chronology for them all and hopefully I have done an adequate job of it. There are also photos and the Haikus which provide a welcome contrast to the preponderance of sermons.

All in all, it has been a blessing to have had the opportunity to work here alongside – and with the guidance-  of the knowledgeable and generous staff at the Burke. This has whetted my appetite to pursue more opportunities in this field, and I am grateful for having been given the chance to work here.