Don Benedict was many things — a Union alumnus, a founder of the East Harlem Protestant Parish, a WWII conscientious objector-cum-Air Force sergeant (retroactively pardoned by Truman in 1947), a staunch criminal justice reform advocate/prison abolition activist, a minister in the United Church of Christ, an ally and advocate to people of color targeted by the police from New York to Chicago, a devout Midwesterner, and husband to Ann, a fellow activist and EHPP founder whose own tireless work could span volumes. 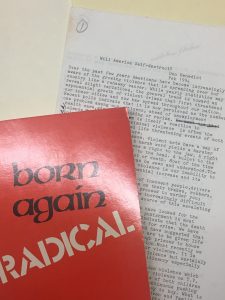 Just some light reading… an annotated first edition of DLB’s autobiography alongside a typescript of his 1994 essay, “Will America Self-Destruct?” Series 3, box 2, folders 1 and 24.

This particular reverend was also what I like to call a “keeper”. Like many writers, he tirelessly drafted, annotated, and held onto versions his writing as if they were precious food in wartime. When I first passed over the fifteen-plus record boxes that have been waiting in the Burke’s basement since we first received Don Benedict’s papers in 2010, I steeled myself for extensive weeding to uncover the thread of a cohesive life story. 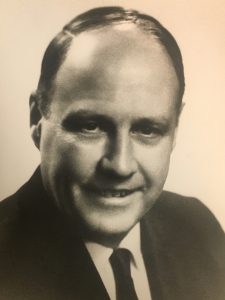 Don Benedict’s life doesn’t seem like it was one that took kindly to order and intuition, though. A white middle-class boy raised in Michigan, Benedict could easily have taken a more or less intuitive road in life – gone to seminary, served in the war when he was asked to, married when he supposed he should, settled down with a single parish and perhaps one day gather up his sermons and correspondences to donate to the appropriate historical society or library. Instead, Reverend Benedict seemed pulled (from a remarkably early age) to something greater, messier and far more transformative for himself and for people and communities walking the same streets as him, but whose life experiences were riven by systemic oppression because of racism and poverty.

The numerous drafts and excerpts of memoirs that I organized in Reverend Benedict’s papers do justice to winter sleigh rides with his father in Canton and Don’s diffidence in school, but also to his early observations of social injustice that undergirded urban American life. I was happy to find so little to weed in Reverend Benedict’s writings — he was a keeper, but an exceptionally wry, generous and illustrative memoirist. It was as if his autobiographical impulse stemmed not so much from the need to be remembered himself, but from an understanding that his work and life was bearing witness to a dream for change that was much bigger than one person. As such, it didn’t seem possible or ethical or do away with the traces and passages Benedict wrote, since so much of it tells a personal history, a history of Union, and a cultural history of activism in 1940s America at the same time. In one passage recounting his Union admission interview with Dr. Henry Sloane Coffin, Benedict writes:

With my B- college grade average I hesitakenly [sic] walked into his office. I talked a bit about my background and admitted that I had not spent much time on my college studies. I talked about my interest in relating the church to questions of race and poverty. At this point he warmed up a bit and said that they might find some small tuition help if I decided to come to Union. The warmth and understanding of this man really impressed me […] about two weeks later I received a letter from him saying that I was admitted to Union Seminary. Little did he know that within two years he would be visiting me along with others in the federal jail at West street in New York City but that comes later in the story. [“Early Years”, Series 3, Box 1, f 7] 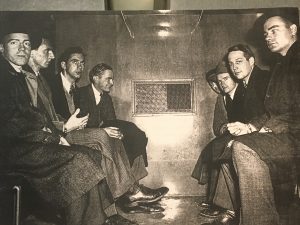 Don Benedict (second from the front on the right) and his Union classmates after their arrest for resisting the draft in 1940. Series 4, box 1, folder 8.

Paragraphs like this one – irregularly paginated and stuffed among mottled clippings – made me feel like I was listening to Don while taking a walk near his family home in Chittenden, Vermont. Most of us have had experiences like this, when someone’s freeform thoughts are written in such a way that the words almost seem to pop. Reverend Benedict’s memoirs have this quality, and create a compelling real-life bildungsroman of a middle-class Midwesterner whose calling was anything but middle-of-the-road. Indeed, Benedict’s autobiographical impulses eventually did take a relatively concise form in his 1982 memoir, Born Again Radical, which recounts Benedict’s upbringing in Detroit (including witnessing the race riots there), to Union, to his brief time incarcerated at Danbury, to Iwo Jima in 1945, back to Union, to the storefront churches of East Harlem, to some of the numerous (truly, so many) community organizations founded or in some way led by Don and Ann, to the intimate relationships Don maintained with members of the many communities he moved in.

Some of the most glimmering materials I had the privilege of organizing came from Don’s longstanding correspondence with people whose lives were/are affected by the criminal justice system. When he couldn’t fight alongside someone, Benedict fought for them, and this realization lent particular credence to the work of handling his papers. As I was researching this collection/googling, I came across an expired IndieGoGo fundraiser organized by one of Don and Ann’s grandchildren, Agnotti Cowie, who was creating a documentary about Ann and Don called “A Dangerous Pair”. In the project trailer, one of Don’s friends attempts to summarize Don and Ann’s life’s work: “[He] would go into a neighborhood, talk to the people, find out what’s troubling them, convince them that those troubles are a consequence of powers greater than they are, then organize people to exercise their organized power against the powers that were oppressing them.”

I’d been excited to dig into Reverend Benedict’s papers since I began working as an archivist at the Burke. This collection adds to our still-deepening collection of archival material from the postwar years, situated somewhere between the East Harlem Protestant Parish papers processed before my arrival, and the Norm & Peg Eddy papers being processed by a current Union student this semester. In Don Benedict’s papers, I was delighted to take a proverbial walk with a humble, driven, devoted person who embodied the spirit of allyship in urban ministry and in community building.

Appropriately, the linear extent of this newly-processed collection is about equivalent to the height of an exceptionally tall person.