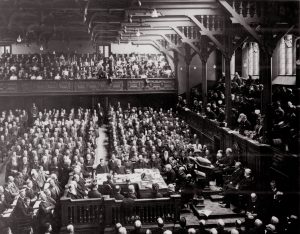 Among the Burke Library’s most frequently consulted collections is the Missionary Research Library (MRL), an extensive body of books, pamphlets, reports, periodicals, and archives that originated in 1914, following the Edinburgh World Missionary Conference of 1910. Created by, and initially intended as a research resource for, Protestant missionaries working in various mission “fields” around the world, it is today understood as one of the richest repositories in the U.S. for area or global studies. As the self-understanding and goals of primarily liberal Protestant denominations and organizations changed over the course of the twentieth century — from evangelization to more broadly humanitarian work in education and public health — a wide variety of materials nevertheless continued to flow into the perennially underfunding MRL. In 1976, the MRL became part of the Burke Library; in 2013 the processing of the bulk of these collections was completed by Burke Project Archivist Brigette Kamsler. (Columbia University Libraries has digitized nearly 4,000 the more than 21,000 pamphlets in the MRL; that project is expected to continue in the coming years.) 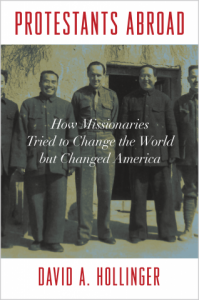 Several academic presses, including Brill and Eerdmans, have been regularly publishing works on the history of missions, evaluating the significance of Protestant as well as Roman Catholic missionary endeavors. A recent work of particular interest for the Burke’s MRL collection is David Hollinger’s Protestants Abroad: How Missionaries Tried to Change the World But Changed American (Princeton, 2017). Hollinger recently discussed his work at Columbia’s Heyman Center for the Humanities. One of the stories Hollinger highlights concerns the extent to which liberal Protestant missionaries were often the first of any segment of US society to support the work of movements such as civil rights and decolonization. Many children of missionaries (sometimes known as “mish kids” or “third culture kids”) would become scholars, diplomats, and founders of international NGOs (including precursors to programs like the Peace Corps). During World War 2 and after, they were leading advocates and supporters of Japanese citizens who had been confined. 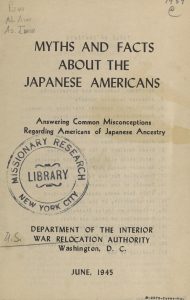 influence of these individuals and the movements and organizations they fostered. Because many had grown up and been educated outside the US and often possessed deep cultural and linguistic knowledge, they tended to be sympathetic to a broader range of perspectives and experience as well as critical of both the domestic and foreign policies of the US government. They espoused a nascent version of what would later be called multiculturalism or pluralism. Though they were not always successful in achieving their cultural and political goals (he notes their often vehement but failed opposition the Vietnam War, for one), Protestants Abroad analyses how the experiences and values of these “missionary cosmopolitans” (well-attested in the holdings of the MRL) had an important influence on education, politics, and activism.

2 thoughts on “On “Missionary Cosmopolitanism””