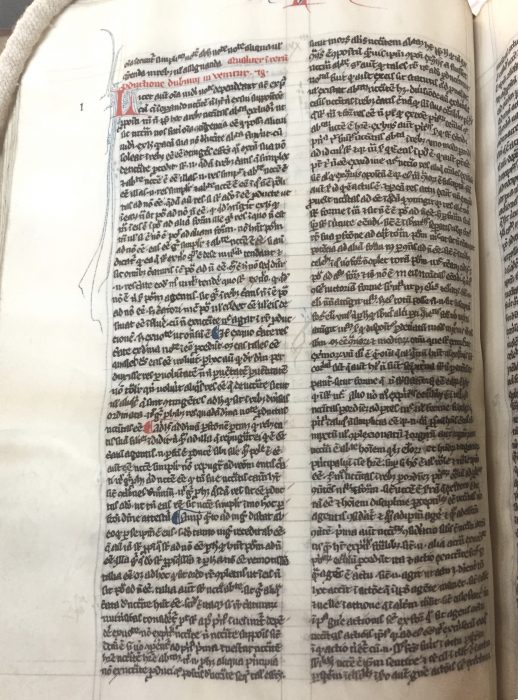 A folio from UTS MS 005, a manuscript of Thomas Aquinas’s “Summa contra gentiles.” From the Burke Library at Union Theological Seminary, Columbia University in the City of New York.

I believe the answer to this question lies in its marginal notes, or lack thereof. To fully dive into this, we first need to establish some context. Thomas Aquinas wrote Summa contra gentiles in the mid-thirteenth century, after he had completed a teaching residency at Cologne, which is just down the Rhine River from Düsseldorf. It contains philosophical arguments designed to logically prove the correctness of Christianity in debates and arguments with non-Christians. Aquinas died in 1274, so if this manuscript was indeed created in the thirteenth century, it would have been roughly contemporary with Aquinas’s life. If this was current scholarship with a local connection, why are there no contemporary notes in it?

In the thirteenth century, the University of Paris was on the cutting edge of the Western European intellectual community. This, of course, meant to many Church officials that it was also a potential breeding ground for heresy. In 1270, the bishop of Paris, Stephen Tempier, issued a list of condemned ideas that were derived from the University of Paris’s own faculty [Wippel 171–172]. This was part of the larger intellectual war between the Neo-Platonists, whose arguments were drawn from pagan philosophers, and the Neo-Augustinians, who were against pagan sources [Wippel 174, 184]. Thomas himself had developed a new form of Aristotelianism called Thomism, and although he himself was not condemned in 1270, this did put a target on his back [Wippel 175, 182]. Aquinas left Paris in 1272, two years before his death, and after his departure the Neo-Augustinians grew stronger [Wippel 184]. Three years after Aquinas’s death, Tempier issued another set of condemnations, many of which directly attacked Aquinas’s ideas [Wippel 195­–196]. Tempier even started a separate investigation of Aquinas, although it obviously never led to a conviction of heresy [Thijssen 72, 98]. Nevertheless, these condemnations marked an intellectual turn against Neo-Platonism, and stunted Thomism’s growth [Robiglio 52, Wippel 199].

If the manuscript was finished sometime between the Condemnations of 1277 and Aquinas’s canonization in 1323, it might have simply been put away for fear of potential heresy. These dates also agree with the manuscript’s script; if it were written in the very late thirteenth or the early fourteenth century, that could explain the script’s level of development. But what of the rest of the manuscript’s life? This manuscript had a reader who made a lot of marginal notes in the form of symbols, manicules, and occasionally words. I believe he was probably working around the time the book was rebound, in the fifteenth or sixteenth century. This is because the words in his marginal notes look to be in a Humanist hand, which is a Renaissance script. 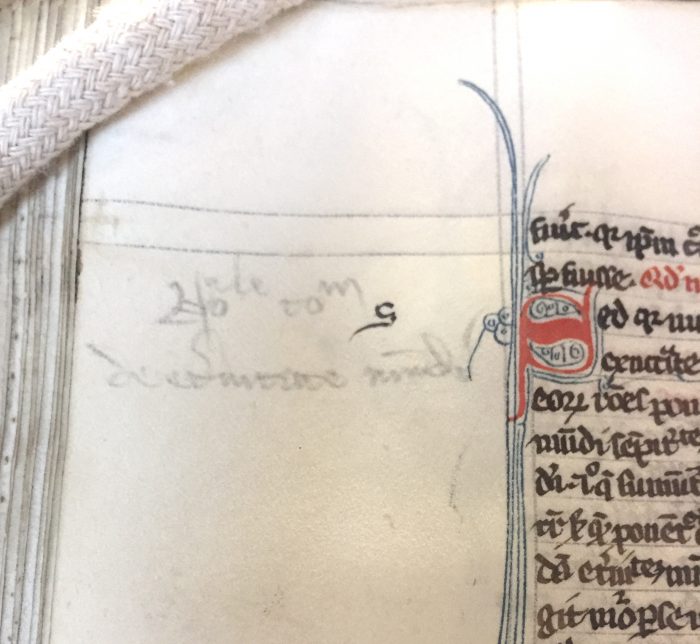 Marginalia in a folio from UTS MS 005, a manuscript of Thomas Aquinas’s “Summa contra gentiles.” From the Burke Library at Union Theological Seminary, Columbia University in the City of New York.

I lean more strongly toward a sixteenth-century date because the reader would have had an incentive to find ways to philosophically argue against non-Catholics: the rise of Protestantism in Germany. I also believe that he was a sixteenth-century reader based on the width and softness of the lead in which he makes his notes. They look like they were made with something close to a modern pencil, instead of the thinner leadpoint stylus used to rule the manuscript’s margins. This would mean the notes date to the mid-sixteenth century, after the invention of the pencil. This puts the reader in the geographic and chronological epicenter of the Reformation, which is really exciting! Most importantly, this reader helps us determine that this manuscript was a living, breathing document. I feel lucky to have participated in its history, too! -VW

*Valerie Wilson is currently working toward her Master’s degree in Medieval and Renaissance Studies at Columbia University. She is interested in all things medieval, but especially textual transmission and book culture.

Gatherings: Unable to determine because of tight binding

Parchment quality: Fairly white and uniform, lots of holes and stitching-repairs made before any writing was done. Some bookworm holes, especially on outer leaves.

Prickings: Yes, but pages are partially cut, so some are not visible.

Inside of UTS MS 051, a fifteenth-century French book of hours believed to have belonged to King Henry III, now housed at the Burke Library, I expected to find certain kinds of illuminations. Most books of hours begin with a calendar, each month marked by illustrations of the the zodiac or of seasonal occupations (Gunhouse). But, as I turned its pages in Burke’s special collections reading room, I saw that the calendar was surrounded by floral and geometric motifs. 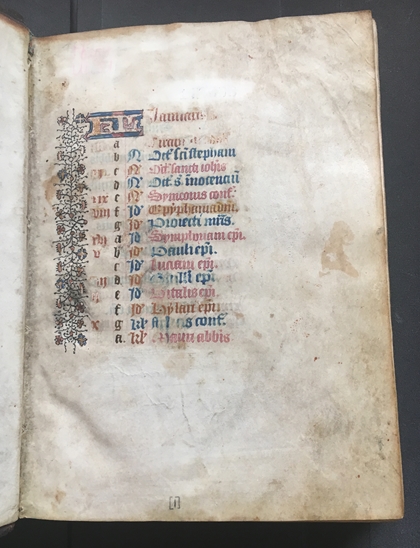 UTS MS 051, f1r, January in the calendar of the manuscript, a Book of Hours. From the Burke Library at Union Theological Seminary, Columbia University in the City of New York.

The floral motifs were skilfully illuminated, but conspicuously detached from the human activities of the calendar year. Though these illuminations take up only the center of each folio of the calendar, they are surrounded by substantial margins, so that the red, blue, and gold writing that marks each saint’s feast day floats island-like amid blankness. As I continued to turn the pages—past the gospel readings, past the hours of the virgin and the office for the dead, past luxurious full-page illuminations marking each section with ultramarine and gold—the book hewed more or less to what is expected in the genre (Gunhouse). It was atypical mostly in its luxuriousness. Use marks decreased with each passing page, as if its medieval owners had begun each day with the full intention of piety and prayer, only to get distracted somewhere around terce. And then, at the back of the book, (where there were few use marks to be found), I came across something even less expected than the abstract blankness surrounding the calendar pages. Here on f143 was a full-page illumination of St. Eustace, or “Eustachio,” as the illuminator has labeled him. 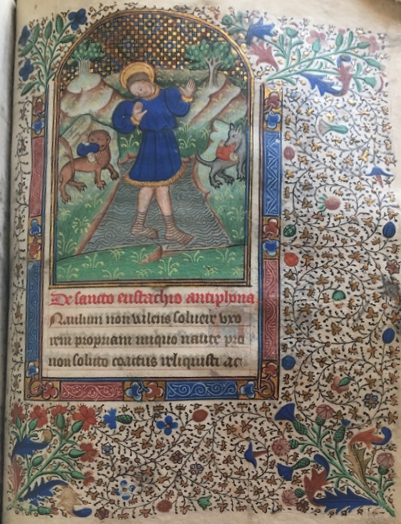 Eustace stands ankle-deep in a river, water rippling over his feet. He is clothed in ultramarine, his head set against a golden halo. Trees grow behind him on pastoral-looking hills of malachite, resembling the ones surrounding the Virgin Mary and her cousin Elizabeth in a visitation scene on f32. But this scene has none of the tranquility of that previous one. Eustace’s arms are raised in distress. His feet point towards one bank of the river, while his head twists backwards at an odd angle towards the other. On closer inspection, it becomes clear why. On each grassy bank, an animal—a wolf and a lion, it appears—holds a small child in its mouth. One child wears red, the other blue, and each lies limp, his head upside-down. The illuminator has captured Eustace in a scene of martyrdom: the moment where his two sons are carried away by wild animals (Shuffleton). St. Eustace is said to have begun his life as a Roman soldier named Placidas, working in service of the emperor Trajan. One day, Eustace/Placidas caught sight of a deer with a crucifix aglow among its antlers. This experience converted him suddenly to Christianity, and his family joined him in this new faith, in spite of warnings that Satan will test him. And test him Satan does: first he loses his property and servants, then his family. After finally being reunited with his family by the emperor Hadrian, Eustace still refuses to denounce his faith, and as punishment is roasted to death inside of a giant hollowed-out brass bull. The moment portrayed in MS 051 is the one in which he loses his sons to wild animals (Shuffleton). This Job-like series of tribulations reminded me of the abstraction surrounding this manuscript’s calendar. Books of hours, made to assist individual prayer, usually contain expressive images for meditation (Gunhouse). This one is no exception. F62, for instance, shows Christ being nailed to the cross, his body riddled with wounds to induce visceral responses. 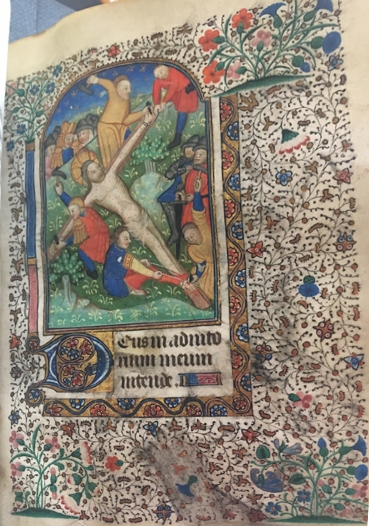 UTS MS 051, f62r. An illumination depicting a crucifixion scene. From the Burke Library at Union Theological Seminary, Columbia University in the City of New York.

Yet, in the narrative of Eustace slowly losing all he has in favor of an abstract faith, and in the wide margins surrounding each day of the year, this book promotes a kind of meditative blankness as well. Rather than solely creating feelings of devotion through narrative imagery, or through a celebration of the tangible, the makers of this manuscript aimed to create these emotions through reminders of deprivation: what, they prompt, remains when that which is tangible is lost? -ES

*Eleanor Stern is a Senior at Barnard College majoring in English. She is from New Orleans.