UTS Manuscripts Student Series Post 3 of 4, by Emily Gebhardt, a Graduate Student in the Medieval and Renaissance Studies Program at Columbia University*

At first glance, UTS MS 019 resembles many of the other medieval manuscripts and codices housed in Burke Library’s collections—it is old, it is worn, and it has clearly seen better days, or perhaps days where there was not as much “stuff” on its pages. “What are you?” I said to myself the first time I sat down with this rather bulky book. While the entry data listed on Digital Scriptorium catalogues the codex as an ordinary collectarium dateable to the fourteenth century and belonging to a Benedictine monastic community in Deutz, Germany, I soon found that by gently turning each folium, this manuscript was much more than an assortment of psalms for the hours of the Divine Office. It comprised at least three texts and its collation ranged from gatherings of six to eleven, or even twelve, folia. The haphazard collation points to the idea that these texts were composed separately, by separate scribes (the hands differ from text to text), and then bound together.

A folio from UTS MS 019, at the Burke Library at Union Theological Seminary, Columbia University in the City of New York.

“What are you trying to tell me?” I asked, and although expecting a non-reply, I was a bit surprised at the answer I received. The collectar portion of the codex has miraculously maintained two original sliding page markers made of leather, complete with metal hinges(!). While two page sliders remain, there are many prominent “scars” or use-marks on the parchment from previously placed markers, now lost. After analyzing my photographs, and sifting through several Google search queries, I began to note a repetition in the placement of each bookmark or scar—they were pointing to psalms that were said for some of the most significant Christian feasts and holidays of the calendar year, like St. Stephen’s Day (December 26) and the season of Lent (the forty days of repentance between Ash Wednesday and Easter). Furthermore, the scarring also highlighted the importance of several locally venerated saints like St. Lawrence, who is associated with abbot Rupert of Deutz (ca. 1075-1130).[1] By noting the location of each scar or page marker, a pattern emerged that demonstrated the text’s function as a highly used book—it was clearly very well-loved and important to the community in which it was used.[2]  Each of the page-markers and their scars were certainly awe inducing, but it was the oily thumbprint in Gathering 15 folium 5r that had me running around showing photos from my iPhone in an attempt to validate my assumptions. 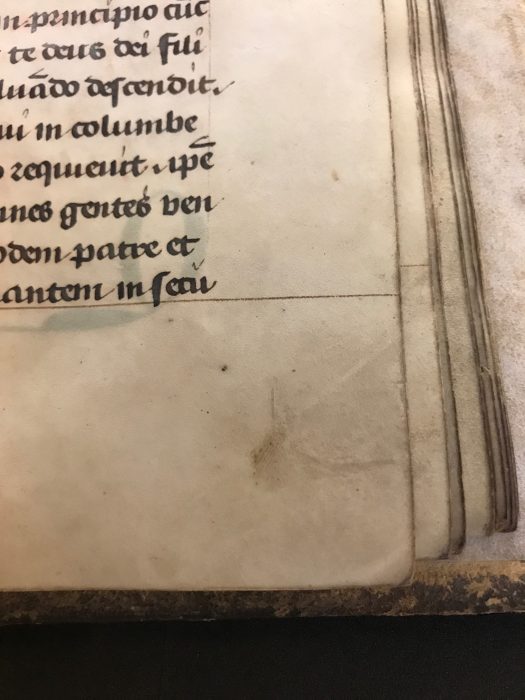 Gathering 15 folium 5r, from UTS MS 019, at the Burke Library at Union Theological Seminary, Columbia University in the City of New York.

The print appeared in a separate text from the Collectar—here followed several sections of “stage directions” for a number of rites and ceremonies, including the shaving of the tonsure and burial rites. While the thumbprint could be from a modern manuscript admirer, its placement within the text, alongside other use-marks, made a compelling case for a medieval counterpart who left his mark on the page. The thumbprint was at the bottom of the folium, located exactly where one would thumb the leaf to turn it over. The real clincher for its placement was that it occurred in a portion of text detailing the holy unction. A priest performing this rite would usually dip his thumb into the oil before bestowing the benediction upon a person. The text detailing the unction was also liquid damaged, perhaps indicating that, at one point or another, this codex was also “blessed” by the holy unction—most likely a benevolently clumsy religious spilt the oil during ritual. The Agenda morientis, or the rites for the sick and dying, immediately followed the Agenda Unctionis (Gathering 16, folia 2r and 2v). 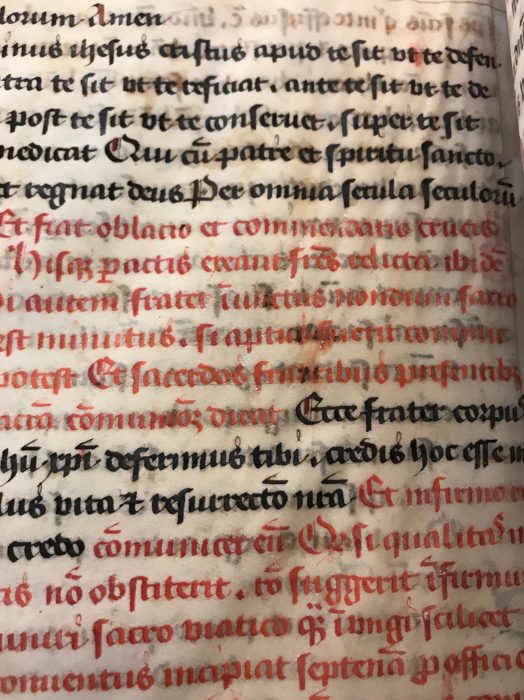 Gathering 15 f. 5v, from UTS MS 019, at the Burke Library at Union Theological Seminary, Columbia University in the City of New York.

The diverse nature of UTS MS 019’s contents reflects that this codex did not stay in one part of the monastery. In fact, it probably had a rather itinerant existence. For instance, while texts of the Divine Office (collectar section) were usually kept in the sacristy or vestry, the rites for the sick and dying would be performed within a monastery’s infirmary. UTS MS 019 had a life of its own—it was not a static object that remained in one spot. Although several worn bosses on its cover show that it was continually stored on its back, the contents and use-marks speak to its life as a codex that was functionally, and repeatedly, appreciated by the community in which it was housed.

[2] Oftentimes, the inclusion of specific saints or martyrs in a codex will help the researcher in determining its origin or provenance. They are hidden gems and fantastic clues.

*Emily Gebhardt is a Graduate Student in the Medieval and Renaissance Studies Program at Columbia University. When she’s not studying manuscripts and medieval history, she enjoys seeing the sites of New York City and attending the occasional concert. She’s a particular fan of the wide range of foodie hotspots, both new and old, which the city has to offer. She recommends Otto’s Tacos on Ninth Avenue between 48th and 49th Streets—and of course the many food trucks on Broadway just off campus!