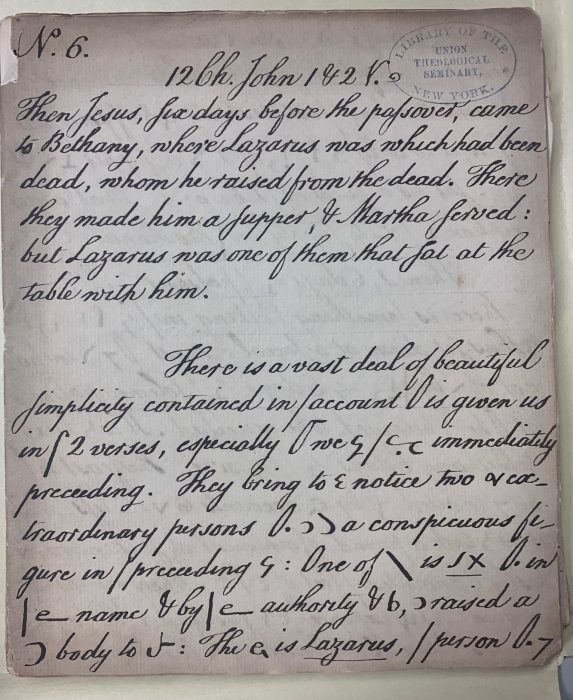 *NOTE: The Burke Library is currently closed and personnel are working from home due to the COVID-19 coronavirus outbreak (see Columbia’s COVID-19 guidance page for more information and consult the Your Libraries Online portal for increased access to e-resources during this time). We are sharing this post, written a few weeks ago, harkening back to a simpler time of on-site library operations. Hopefully it’s also a nice example of electronic teamwork in the new virtual environment going forward. The work of knowledge-sharing and information-stewardship continues apace, albeit remotely; we hope to open our doors again soon, when this period of radical change and illness has ended. We hope our readers are staying safe and well.
– – – – –
While I’m not formally on the Burke staff, you may have seen me around the library. As a rare book cataloger for Columbia University Libraries, I spend one or two days per week at the Burke, examining and describing rare books and manuscripts in the Burke’s collections, to make sure users can find them in CLIO. And I’ve found the Burke’s collections pose some of the most interesting and challenging cataloging mysteries.
Recently, Collection Services Librarian Jeffrey Wayno turned up a folder containing some old manuscript sermons, which he directed to me for cataloging as part of the Burke’s Manuscript Collection. I found a sticky note on the folder that said “Joseph Eckley sermons??,” but as I examined the 9 paper booklets in the folder, I didn’t find an author’s name anywhere on the actual manuscripts. Rather, at the end of most of the sermons, the author signed the sermon with the initial “B.” This made me suspicious of the sticky note’s claim.
I also noticed that the author used a number of short-hand symbols in place of common words throughout the sermon text. At the end of each manuscript, the author also recorded the location and date the sermon was preached.

The sermons were all preached at Old South Church in Boston, between the years 1782 and 1807. Many of them were preached on repeat occasions. The dates and place do coincide with Joseph Eckley’s tenure as a minister of that congregation, now celebrating its 350th anniversary.  But being signed “B,” I had to wonder if they could be attributed to someone else with that initial, active in Boston at the same time. Hamilton Andrews Hill’s 2-volume History of the Old South Church, published in 1890, didn’t reveal any likely suspects for the identity of “B.”

The manuscripts were stamped with the UTS Library’s ownership stamp (no longer routinely done), and inscribed by a previous librarian, indicating they were donated to the library in the year 1920 by Charles Augustus Stoddard, publisher of the “New York Observer.” Stoddard died that same year. If they’ve been in the UTS collection for 100 years, I wondered, was there already a record that would explain the origin of these manuscripts? But nothing turned up.
So I started looking for other ways to confirm the attribution–possibly comparing against Eckley’s few published writings, or against digitized versions of his manuscripts held elsewhere. I saw that other institutions also held manuscript sermons by Joseph Eckley, including the New Jersey Historical Society, the Congregational Library and Archives, and the New England Historic Genealogical Society, but I couldn’t find any publicly available digitized versions of his writings. However, I noticed the Congregational Library and Archive’s finding aid for the Old South collection indicated a series of Eckley’s sermons from “Weston’s Shorthand.” That is, “Stenography compleated, or, The art of short-hand brought to perfection,” a system of shorthand notation first published by James Weston in 1727. This would explain the symbols found throughout the sermons, but still not the “B.”
So, a trip to Boston not being likely, I reached out by email to the Congregational Library and Archives, sending along some photos I took on my phone, in hopes that they could compare the handwriting and shorthand against the manuscripts in their collection. William McCarthy, Reference and Processing Archivist at the CLA, replied with some images of the Eckley manuscripts in their collection, confirming that many of them were also signed “B.” Though neither of us could explain what the “B” initial stood for, I was now confident we had a match based on the handwriting and shorthand, in addition to the dates and places.
The Joseph Eckley sermons are now cataloged as UTS MS 180 and can be found in CLIO. Additionally, you can see Eckley’s own manuscript key to the shorthand symbols he used, to help understand his cryptic handwriting. Thanks to the Congregational Library and Archives for their support, and for allowing us to share their images here. -MH
ABOUT THE AUTHOR:
Matthew Haugen has served as Rare Book Cataloger for the Libraries since 2011. He catalogs rare books, manuscripts, and other special collections, splitting his time between the Burke Library, the Rare Book and Manuscript Library, and the Avery Art and Architectural Library. He earned an MSLIS from the Palmer School, Long Island University, and an MAR from Yale Divinity School.