In the fall of 2017, an exhibit marking the 500th anniversary of Martin Luther’s Reformation-kindling Ninety-five Theses was mounted at Columbia’s Rare Book & Manuscript Library. On Oct. 31 — “Reformation Day” — a panel was held there that included Union Seminary faculty members Euan Cameron and Brigitte Kahl and the German Consul-General, David Gill. The panel examined Luther’s significance from a variety of historical and cultural perspectives.

Thanks to the support of Columbia University Libraries’ Digital Collections and Preservation team — especially VIoleta Ilik, Melanie Wacker, Ryan Mendenhall, and David Ortiz — the exhibit has now been digitized. The online version of Wild Boar in the Vineyard: Martin Luther and the Birth of the Modern World went live this week. 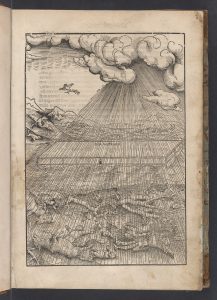 The Burke Library has a very large and far-reaching collection of printed holdings by Luther and other Reformation figures. The exhibit highlighted not only Luther’s key ideas but showcased the role both the new technology of printing and his embrace of the German vernacular as a means of expression played in the rapid spread and impact of his works. 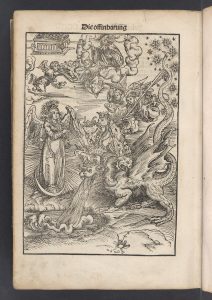 Woodcut illustration from Luther’s German translation of the NT Apocalypse.

It is hoped that this exhibit will be a useful tool in courses studying the Reformation, as well as historical theology and the early modern history of Europe.