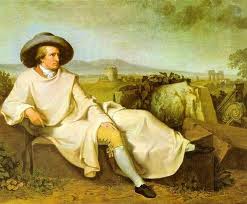 Columbia has recently acquired the online version of Germanistik

This index lists books, essays, and articles published from 1960 to the present on German language and literature, including theater, media, and cultural history.  The entries for the first ten years have fairly basic search terms ("Shakespeare and English drama in German popular journals, 171701759, for example is only listed under the author and Shakespeare), but beginning in 1979, more detailed keywords (in German only) are provided.  This is much more complete for German material than the MLA, though of course, the MLA has older material.

The instructions are available in both English and German, and the searching is fairly straight forward, though there isn’t a lot of information provided about the search terms; "Type of publication" is one option, but there doesn’t seem to be a list of the types the reader can search.  The only one I have found that works is "Buch" (there is nothing for "Artikel", and no articles I found had a type listed), and that only works for recent publications–the oldest book I found about Goethe searching for "Buch" was published in 1996.  So it seems that the best way to search is the simplist–author (called Name), and title.  Keyword only searches what we would recognize as subject headings.

Unfortunately, the source doesn’t have elinks, so the reader will have to look the journal up in CLIO.  These journals are often abbreviated, but putting the cursor over the abbreviated title will show the complete title and citation.