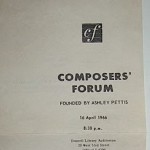 Contained within the archives of the Columbia-Princeton Electronic Music Center (which are held by Columbia University Libraries) there is a series of original reel-to-reel recordings of the concerts of the Composers Forum, made in New York from 1951-1977.

The Composers Forum concerts were an important series of concerts of art music by contemporary American composers. The series was established by Ashley Pettis in the 1930s, under the auspices of the WPA’s Federal Music Project. Beginning in New York, it eventually moved before WWII to California, then went on hiatus during the period around WWII. It was re-established in New York after the war in ca. 1947, under the joint auspices of Columbia and the New York Public Library, with concerts taking place in the Donnell Library and in Columbia’s McMillin Theater. It is the recordings of this post-war period of the Composers Forum which are represented by the recordings held by the Libraries.

An important feature of these concerts was the inclusion of a discussion section, where a moderator would ask the composers questions provided by the audience (in some cases, the concert program included a tear-off tab upon which an audience member could write their question). Some noted moderators included Virgil Thomson, Jack Beeson, and Mario Davidovsky. Here’s an example of a program with the question tear-off: 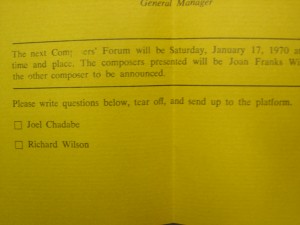 These recordings were created in many cases by the staff of the Electronic Music Center, which possessed the necessary recording equipment. Pril Smiley, former Associate Director of the Center, has recounted transporting the heavy Ampex reel-to-reel tape recorder by bicycle to some concerts for recording (way before the existence of niceties such as bike lanes)! 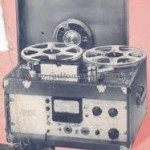 …and, yes…. these were very heavy!

Thirty concerts have been fully digitized and made available to date, funded by a grant from the Association for Recorded Sound Collections (ARSC); they are now available for listening on dedicated workstations in the Music & Arts Library, 701 Dodge. Digitization of the remaining recordings is underway with support from the New York State Conservation/Preservation Program. The recordings digitized to date can be retrieved in CLIO by searching keywords "composers forum". See a sample CLIO record at this link:

To access these recordings, come to the Music & Arts Library, 701 Dodge, and ask for directions on which workstations host the files. Contact us with any questions at musiclibrary@columbia.edu.

For some further reading on the Composers Forum’s pre-WWII period, see: