Challenge your pre-conceptions about the Middle Ages (don’t you call them Dark!) with books recently added to the Butler Library collections. 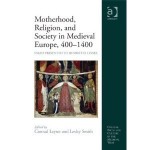 Motherhood, religion, and society in medieval Europe, 400-1400 is a collection of essays, edited by Oxford University’s Conrad Leyser and Lesley Smith, that honors the work of scholar Henrietta Leyser (appropriately enough, Conrad’s mother).  In works such as Medieval Women: a social history of women in England, 450-1500, Leyser sought to bring women out from behind the shadow cast by the towering male political and ecclesiastical figures of most medieval historiography.  In this Festschrift collection, a wide range of scholars examine aspects of medieval motherhood from Augustine’s somewhat conflicted relationship with his mother Monica, to the question of whether medieval mothers taught their children to read, to the primacy of noblewoman Joan de Mohun in a 14th-century French-language chronicle. 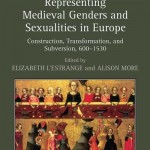 Another new acquisition is Representing medieval genders and sexualities in Europe: construction, transformation, and subversion, 600-1530, likewise a collection of essays, this time inspired in part by a 2005 meeting of the Gender and Medieval Studies Conference.  A nice array of female scholars explore male saints’ virginity, female power through two Flemish countesses, and the way the imagery on Italian “birth trays”—painted trays given to celebrate a birth—confounds traditional gender roles by showing women in dominant behavior. 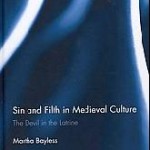 And now for something completely different: Martha Bayless’ Sin and filth in medieval culture: the devil in the latrine.  This title made me think of the line from Monty Python and the Holy Grail: “He must be a king; he hasn’t got shit all over him.”  Bayless looks past the predominant iconography of medieval spirituality to look at omnipresent “emblems of material corruption”: “Excrement was not merely used as a figure of speech but was central to a popular medieval metaphysics…it embodied sin.”  Her subtitle, “the devil in the latrine,” is quite literal; she examines the “moral connotations of filth within a theological framework.”

So, stop by Butler to check out some unexpected views of medieval history—and ask Karen Green, the librarian for Ancient & Medieval History and Religion, to help you find others!