Columbia University’s Rare Book & Manuscript Library (RBML) is pleased to announce the acquisition of two significant additions to its Comics and Graphic Novels collections:  research materials for Larry Tye’s well-received 2012 book, Superman: The High-Flying History of America’s Most Enduring Superhero, as well as six 1940’s Batman scripts from the estate of Jerry Robinson.

The acquisitions are the latest development in Columbia University Libraries’ support for the research and teaching of comics and graphic novels.  Since 2005, a circulating collection of such materials has inspired scholarly inquiry, academic writing and coursework, including The American Graphic Novel, a course co-taught by Columbia University Professor Jeremy Dauber and former DC Comics president Paul Levitz.

To commemorate the significant advances in this area, Columbia University Libraries and the Institute for Israel and Jewish Studies will host a panel discussion, Comics at Columbia: The Golden Age at 6pm in 523 Butler on March 7th.  Reception to follow; admission is open to the public.

Materials in the Tye collection include a seventy-page transcript of an oral history interview with Jack Liebowitz, a founder of the company that would become DC Comics; Superman creator Jerry Siegel's unpublished memoir; a transcript of a lengthy conversation between longtime DC editor Whitney Ellsworth and Superman historian Gary Grossman; as well as documents that outline the sale of the rights to Superman.  Along with Tye’s own research library of nearly 200 books, the collection also includes clippings from publications such as Look Magazine and The Saturday Evening Post that chronicle Siegel and Shuster's creative development, and the typescript for an unpublished Superman story by Jerry Siegel, "The Death of Clark Kent." 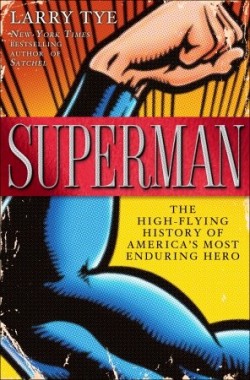 “The story behind the story is knotty and complicated as life always is, and excavating it takes laborious research and hard digging,” recognized Dauber.  “Larry Tye’s work – and the records of it he’s donated to Columbia University – provides a treasure trove for scholars of a significant corner of American Culture.”

The gift of Tye’s research materials coincides with the 75th anniversary of Superman’s introduction in a 1938 comic book, Action Comics #1.  Columbia University Libraries has been invited to co-sponsor the Center for Jewish History’s January 27th event and panel discussion: Superman at 75: Celebrating America’s Most Enduring Hero.  Experts on the superhero, including Tye, will gather to discuss Superman’s inception and endurance as a cultural icon. For more information on this event, please visit http://cjh.org/event/2143.

The Robinson Collection’s Batman scripts, which feature extensive editorial corrections and emendations, provide a valuable glimpse into the collaboration between Robinson and writers such as Bill Finger and Alvin Schwartz.  Robinson is best known for the character design of the Joker.

“Unlike prose, the hidden ‘art direction’ in comic book scripts never makes it from the manuscript to the printed page,” said Levitz. “The gifted scripts are a treasured look at an amazing moment in comics history…and a wonderful resource for scholars.”

“I am delighted that Jerry Robinson’s personal collection of original Batman scripts from Detective Comics and Batman by Bill Finger and other writers will be available for scholars and serious enthusiasts of twentieth century American popular culture,” said Jens Robinson, son of the late Robinson and donor, with his mother Gro, of the Batman scripts.  “These characters – from the Joker, Penguin, Two-Face, Catwoman and others in the Rogues gallery – to Robin and the faithful Alfred – were only the very beginning of decades of literary, artistic, journalistic, entrepreneurial and humanitarian contributions to the world by a ‘boy wonder’ from Trenton, New Jersey.”

Columbia University Libraries/Information Services is one of the top five academic research library systems in North America. The collections include over 11 million volumes, over 150,000 journals and serials, as well as extensive electronic resources, manuscripts, rare books, microforms, maps, and graphic and audio-visual materials. The services and collections are organized into 22 libraries and various academic technology centers. The Libraries employs more than 500 professional and support staff. The website of the Libraries is the gateway to its services and resources: library.columbia.edu.