The Libraries are thrilled to host an event sponsored by the French Embassy: a conversation between French cartoonist Alex Alice and Brooklyn cartoonist Ron Wimberly on the craft of transforming literature into comics. 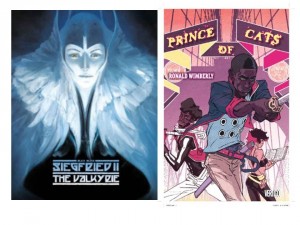 Alex Alice has produced an award-winning three-volume adaptation of the Nibelungenlied, or Ring Cycle, titled Siegfried, now being published in an English edition.  Ron Wimberly, whose art for Sentences helped it merit a choice as one of Time magazine's Top 10 Graphic Novels of 2007, recently published a hip-hop adaptation of Romeo and Juliet, Prince of Cats.

The two artists will discuss their work and the process of adaptation in a conversation with Tucker Stone, co-owner of Bergen Street Comics.