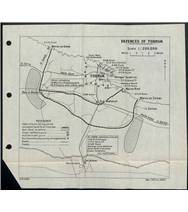 The Library has recently acquired online versions of the Confidential Print series, a collection of British government documents.  Beginning in the late 1820's, the British government began printing copies of important correspondence from diplomatic and consular officials (including letters, telegrams, policy documents, and reports) which were then circulated to Foreign Office and Cabinet officials, and to British missions overseas to keep these officials informed about the important issues.  These series were printed up to about the 1970's, when, according to the British National Archives, the photocopy machine arrived.  The original documents are in the British National Archives, but the Confidential Print, to quote from a review of the North American Series are "a selection from what was often a vast swathe of material …It is not the full, unabridged story [but] there is no doubt that an early trawl of the relevant Confidential Print series is a must for anyone setting out to investigate British or Colonial policy."

The online series are North America: Canada, the Caribbean, and the USA (1824-1961); Middle East (1839-1969); Latin America (1833-1969); and Africa (1834-1966).  The series for Europe and for Asia have not been digitized, and, according to the publisher, there are no current plans to do so.  Selected documents from the European and Asian Confidential Prints issued by the Foreign Office have been reprinted (these are more voluminous than the Confidential Print issued by the Colonial Office), and Columbia has these volumes listed in CLIO under the title British documents on foreign affairs–reports and papers from the Foreign Office confidential print.  There are several series, and they have slightly different call numbers.  The European volumes are especially useful for material relating to the two world wars, since the printed compilations British documents on the origins of the War, dealing with World War I, and Documents on British Foreign Policy, 1919-1939 (both available online as Documents on British Policy Overseas) don't have material on wartime activities.

The Confidential Print include much more than diplomatic chit-chat, and looking through some of the documents gives the impression that every British official was sending detailed notes on local conditions, so these documents are a phenomenal resource for economic, social, agricultural, and geographic information.  To take a page at random, this is from The West Africa Correspondence (1889-1901) dealing with Botanical and Forestry Matters

Page 66
Rubber collectors have now to go 15 or 16 days off Ibadan for rubber, beyond the
Protectorate of this Colony. The countries where active rubber working is going on
are the Benin and Akoko forests. Unfortunately we could not proceed to these parts,
which we were made to understand are without the Protectorate of the Colony.
Consequently we did not go further than Owo (a place only three days off Benin), which
we understood is the limit of our Protectorate on that side.
Timber.
During Our travels through all the above-named towns, we did not only pay attention
to the rubber industry, for which we were sent up, but also spared a little of our
time for noting down and gathering interesting information on things in general, which
we have no doubt will be of some use or benefit to this Department.
As one leaves Lagos, and travelling on the lagoon en route for Epe, Ejinrin, or
Ikorodu, a different and more interesting scenery is at once noticed than what is
generally seen by the inhabitants of Lagos. This is a large and continuous expanse of
virgin forests on the banks of the lagoon, stretching from Ikorodu (2 hours' steam
from Lagos), and continuous up to Benin.
Taking it from Ikorodu, the forest extends inland to Ibadan (three days' journey
off Ikorodu), and joined by the expanse of forests from Epe and Ejinrin, which in parts
are cultivated. Branching off at Jebu Ode and proceeding Ikire way, via Atikori,
there is another larger and more extensive forest to be seen, and continuous with lie
Ife, Ondo, and Ilesa forests which in turn run in with the other Ekiti countries, thus
forming one large extensive range of forest from Atikori right on to Owo, and which,
adjoining the Ikale, Sekiri, and Ijo forests, thus spread on to the lagoon.
The range of forests along the banks of the lagoon, and to a limited extent inland,
is peculiarly grown with Mangrove trees (Id Egba), which are valuable as timber
trees (the wood of which is very hard), and the bark of which is very astringent, and
is valuable for its tanning properties.
Inland the forests, especially Jebu and Ekiti forests, abound in large quantity of
valuable timber trees, which are used by the natives for various purposes, and also
(being ignorant of its value) for firewood.
The various timber trees found in Jebu, Ekiti, and Ibadan forests are numerous.
The following are trees observed, and also the purposes for which they are used: —
Iriko, Afara, Opepe, Otutu, Agono, Apa, Oro, Ayon, Em, Ara, or Opepe, Agbonyin,
Apara, Oro, Bonobono, Ayon, Arere, Idi, Sedun, Ira, Orowo, Akika, or Aka,
Irosun. The Ekitis as a rule have different names from those given by the Yorubas;
as such, it was difficult to get the correct names of the different trees. The general
uses of the above-named trees vary more or less among the different tribes, but we
will simply classify them all according to the general use in the interior.
TABLE of the different uses to which the above-named Trees are put by the Interior People
generally.
Trees used for Canoes.
1. Iroko.
2. Arere.
3. Idi.
4. Apa.
5. Ara.
6. Agono.
7. Olutu.
8. Opepe.
Trees used for Doors.
Iroko.
Apa.
Agono.
Opepe.
Ira.
Trees used for House Posts.
Afara.
Ayon.
Apepe.
Sedum.
Ira.
Oro.
Trees need for Motars.'
Emi.
Iroko.
Apa.
Apara.
Trees used for Motar Pencils
Oro.
Orowo.
Akika.
Irosun.
Apepe.
Trees used for
Native Bowk.
Iroko.
Egun.
Arere.
Trees used for Drums, &c.
Omo.
Avon.

We do not deem it necessary to include in the list such trees as are used for
carving idols, warri-bowls, native spoons, &c, because they are more or less very soft,
and, in consequence, cannot stand hard usage.
As our mission and instructions were chiefly in the interest of the rubber industry,
we could not spare time to collect specimens of wood, flowers, leaves, &c, of these
trees, which are very large and high. Consequently we were obliged to return to the
Colony without bringing these specimens.
Page 67
As the general work of interior women and girls is the weaving and dyeing
of cloths, &c, this report will be an incomplete one without the mention of the indigo
plant. There are two kinds of indigo used by the natives for colouring their cloths, &c,
jet black, deep or light blue. The native names under which these two distinct plants
are known are Elu (Lonchocarpus cyanescens) and Sense (Indifofera sp.). A
report on an experiment tried in the former plant (Elu) will be seen in the 29th Report
of the Botanic Station.
Elu is a shrubby tree, the young leaves of which are generally used for extracting
the dye.
This operation is simple. The young leaves are pounded, balled, and then left to
ferment, after which it is well dried, when it can be stored and used whenever required
without any danger of its getting spoilt. When required for dyeing these balls are
steeped in an acid water, and as soon as the water becomes coloured the cloths are then
dipped in and dyed.
This dye is very strong, and we have no doubt that if it can be prepared in a
better way, so as to get out of the leaves the pure dye without any other impurities, a
good and lucrative trade will be started in this direction.
The Sense dye plant is much used by the Ilorins, Tapas, and Hausas.
It takes much longer time to extract the dye matter out of the leaves than Elu
does. The same process is adopted as in the case with Elu.
This plant is a dwarf shrub, of about three species, found plentifullv in the
interior, where it grows wild; but we have no doubt that in course of time, when the
value of such plant is known by all, more attention will be paid to its cultivation,
and not be allowed to waste.
Fibre Plants.
Several fibre plants were seen, both cultivated and wild up country. The commonest
met with are Bolobolo (Urena lobata), Boko, Pineapple, species of Corchorus,
Bowstring Hemp (Sanseviera guineensis).
Of these, Boko, Bolobolo (a white-skinned variety of it) are cultivated in Yorubaland
for their fibrous barks, which are used for tying purposes. Pineapple is also
cultivated all over the Protectorate nearly, though not for its fibre, but more for its
delicious fruit.
Bolobolo, especially the red-skinned variety, is wild and plentiful everywhere is all
waste places, and it would be a grand thing if this valuable fibre plant is taken up and
developed.
Already sample of its fibre has been sent by this Government to England in 1886,
where it was reported on to be superior to jute in quality and strength, and would
always command a higher price and a readier market, if it could be shipped regularly
and in good quantity. Ever since that year the matter has dropped entirely, from want
of energy and enterprise to develop the industry.
The Boko plant is found only under cultivation, but there seems to be a brighter
future for it, even than that of Bolobolo, for it is considered by the natives generally to
be much superior in quality and strength than Bolobolo fibre.
The bark of it, as well as that of Bolobolo, is woven into all sorts of ropes by the
Gambaris.
The Bowstring Hemp, called Oja Ikoko by interior countries, is found wild more
or less all over the interior countries, especially in forest lands near swamps. The
fibre of this is much more valuable commercially than those of either of the two former,
being worth £40 to £60 a ton if well prepared and cleaned. The natives also extract
its fibres and make it into strings, which they use for leather work. This fibre plant
ought to have a grand future.
The species of Corchorus, though found wild here and there, are not known as
fibre-yielding plants by the natives; consequently thev are not cultivated or put to
any use.
Gum Trees.
On the 25th of June, when we were on our return journey, we received a letter
from the Acting Resident, instructing us to make strict enquiry about the different
gum trees found in the interior forests.