This is the first, introductory post of what will be a series of posts for the Digital Humanities Center on the topic of Digital Workflows for Academic Research for Mac.

Digital workflows? What does that mean? Does this involve apps and nifty tools, hacks, and tutorials?

Yes. Good news for the huddled masses staring at their device and computer screens night and day, including the e-masses huddled in Butler library: of course this is about apps–plenty of apps. Apps for your iPhone, iPad, and Mac; web-based apps, cross-platform apps, I may even mention some PC apps. “There’s an app for that” is now quasi-proverbial (Thanks Apple!), and I promise to deliver here some great approaches—nifty tools, hacks, and tutorials—to help Columbia Mac users go from the phase of information collection and capture between print and digital media of academic research, to the analysis, annotation, and creativity phase of article and publication production, all while navigating the many questions and time-wasting puzzles that inadvertently arise between our Gmail inboxes, dozens, hundreds, or thousands of (either OCRed or unOCRed) PDFs, our own notes, web snippets, nuggets of data, bibliographic inanities, and the blinking cursor of the word processor in writing projects—before anything arrives at a publisher, conference, or your adviser’s desk (ahem, I mean, Gmail inbox) in the form of a reviewable piece of your own academic writing.

Why Mac? This series focuses nearly exclusively on Mac for two reasons:

Over the last ten years, along with Apple’s rising popularity, the Mac share of the higher and secondary education market is now at a saturation point that dwarfs its previous educator friendly reputation of the late 1980s and 1990s. According to some studies, as many as 60-70% of undergraduate and graduate students at major institutions use Mac exclusively—and also increasingly iOS devices (iPads and iPhones)—as their primary devices for school and study, as well as for recreation and personal use. While the Mac share of the market is still nowhere nearly as large as the PC, Mac users are beginning to predominate in education, engineering, and science. iPads are also becoming a serious learning tool.  Columbia’s academic Mac users are no exception.

Because of this, there is now an active community of software developers and innovators—including many students, faculty, and scientists at the institutional level—working together to make new tools and approaches for improving methods for “digital” academic research (for example, Macademic) in the humanities, sciences, and social sciences on the Mac platform. Many of the hottest applications and workflows for academic research now are clustering around the Mac. This is not to say that there are not great tools or there is no development being done in the PC/Wintel arena, but this year we decided that we wanted to help the sizable Columbia Mac student/faculty community by introducing them to the possibilities that they may not know of, as well as offer them some support for exploring digital workflows on the Mac at the Butler Digital Humanities center. 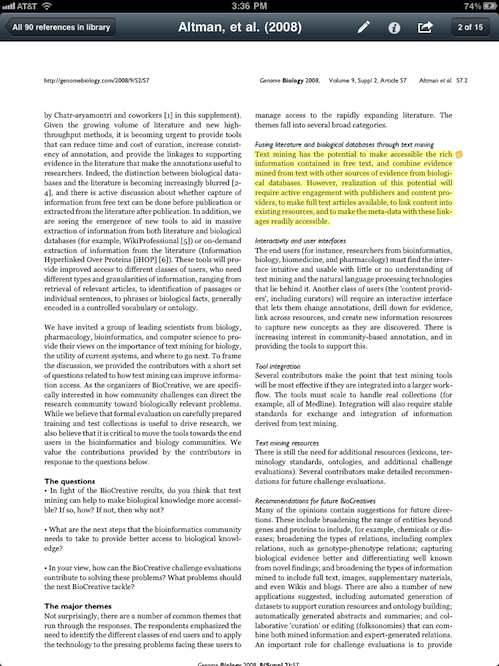 Annotating PDFs with Sente for iPad

The fact that there’s an app for that is a good thing, because writing and researching is hard work. Mac software like Sente 6 (with Sente Assistant), Devonthink Pro Office, Scrivener, OmniOutliner, Novamind 5 Pro, harnessed with the power of open-source Apple Scripts, a conceptual understanding of OPML architecture–and a demonstration of the general principles behind the practice of the digital workflow, which I hope to introduce (albeit not exhaustively) in the series–will present the user who wants to improve his or her digital process with real solutions for accomplishing efficient, organized, and research, while saving time and frustration, and  avoiding organizational catastrophes (which can delay or even undermine the realization of creative work) between iPhones, iPads and the Mac. For example, how to use Sente to annotate and read PDFs on the go on an iPad, keep them synchronized with cloud-based libraries, and how to use Mac Sente to import coupled bibliographical information with your PDF libraries cleanly and also export your organized annotations and quotations for use on your thesis or book projects.

I’ll offer some very tailored approaches I’ve discovered in the process of doing my own dissertation research and preparing this series as a Digital Humanities Intern this year. Daniel Wessel’s blog, and now book by the same title, Organizing Creativity, however, is a must-see for anyone who is ready to dive into the theoretical and highly detailed practical considerations of realizing creative work in the digital world generally, and has been a major influence on the approach I have developed (Thanks, Daniel!). The highly technical experiments in scripting on the Mac with various applications for academic research by John Sidiropoulos over at OrganoGnosi, moreover, have also been formative in developing this series, and offer a glimpse (for both expert users and novices) into the very many difficulties faced in trying to make and streamline a series of processes, like simply organizing and keeping PDFs, bibliographic information, and annotations together across applications, according to various needs.

But I will not cover every possible app and solution, nor pretend to, because the flip side of the there’s an app for that culture, is that the proliferation of tools and infrastructure for productivity offers little coherent and cogent guidance in the best tuned methodologies for actually accomplishing sharable, realized research.

Not only does new scientific research show that that true “multitasking” is a myth–yes, you know that checking your email, your Facebook, texting, reading a book for the first time and writing a term paper on it simultaneously does not really work out–but also that the value of the multiverse of e-and-iWhatevers which promise us shortcuts and “streamlining” of many tasks may not be as helpful as all the hullabaloo makes them appear, especially not when doing serious intellectual work. As Ryan Kalember pointed out recently over at Quartz (along with many, many others), perhaps “The biggest productivity killer is that there’s an app for that … and that … and that, too.” We are not only drowning in a panoply of devices, apps, and WiFi connections, but these rapid advances in technology –and the cultural mindsets and practices which follow–as represented by the app mentality, can contribute both to the illusion of productivity and careful goal-driven work, and at the very least raise serious questions about the app mindset in regard to tackling serious intellectual challenges.

Katherine Xue, in an article on the app youth culture in Harvard Magazine, cites a recent book by Howard Gardner and Katie Davis, The App Generation:

“This is a generation that expects and wants to have applications,” says Gardner. Applications, more commonly known as apps, are shortcuts designed for accomplishing specific tasks. They’re ubiquitous, powerful, and strongly structured, and the authors argue that they’re changing the way we think. “Young people growing up in our time are not only immersed in apps,” they write, “they’ve come to think of the world as an ensemble of apps, to see their lives as a string of ordered apps, or perhaps, in many cases, a single, extended, cradle-to-grave app.” The app mindset, they say, motivates youth to seek direct, quick, easy solutions—the kinds of answers an app would provide—and to shy away from questions, whether large or small, when there’s no “app for that.”

Now, those born in the 1980s or earlier are likely to remember a world in which the entire stuff of academic research—that is, reading and writing—were, well, analog! Doing research, as it had been done, since perhaps the time of Gutenberg–or even earlier in the scholastic libraries of the Middle Ages–meant the following experience (which most graduate students and faculty who work in Butler should be familiar with): going to a physical library, handling dozens of real (often heavy) books, selecting them, and reading them. With pen and paper—or some other form of recording device like vellum (skin)—collecting, analyzing, capturing, recording, and synthesizing information both as quoted and cited from reading texts and from one’s own thoughts and reactions to the quotes, facts, narratives, and textual varia of other “authors” and “texts,” often over long periods of time and on a variety of projects or subject matter. Fast forward to the 20th century, post 1970s, and this perhaps included making “photocopies” of articles, snippets, or the title pages of references on the “Xerox machine” (hot 1980s technology!) or using an electric Microfilm or Microfiche reader to locate archival information or back periodicals. The general principle of organization involved custom systems of note cards, labels, binders with dividers, individual notebooks, etc. Usually some form of handwritten material and a series of sources, with comments, were organized at a desk and eventually, the researcher drafted a creative, new piece of research by hand or on a typewriter.

A workflow for academic research from around 1984, until around 1996-2000, when the internet began to go mainstream, retained most of the above aspects, and might have been “digital” in so far as it operated on some sort of x86 silicon chip, and involved a “word processor” with bibliographic management software like Endnote. The former was little more than a more versatile typewriter, and the latter a translation, so to speak, of a card catalog model of bibliographic reference keeping to a digital medium.

Enter Digital Workflows for Academic Research circa 2014. In the world of Web 2.0, there are tools and apps galore, vast databases of digitized books, articles, shared information, websites, etc. The collection of information involves vastly greater quantities of text and even new media of citable and crucial information available through the internet and offering incredible new possibilities for research. However, the repository of history and the human sciences not only still predominantly exists on paper and in the library stacks–how many times have you had to scan something in the Digital Humanities Center? raise your hands–but research now not only involves a mixture of digital and analog materials, but a confusing complex in which we–the biological and rational creatures–must work between machines and digital media and yet still adhere to the rightly rigorous demands of linear information presentation and scholastic conventions in the production of papers, articles, and dissertations. In short, little has changed about the craft of writing and doing scholarship, but much has changed which makes doing focused and productive scholarship more challenging when working between many sources of digital and analog information, and its “online” and “offline”–so to speak—synthesis by the “knowledge worker.”

The situation we face today generally requires students, writers, scholars and academics not only to employ research methodologies appropriate to their disciplines (or even interdisciplinary methods to answer questions which now transcend traditional spheres of academic expertise) but research methods and “workflows” which bridge what Marshall McLuhan, the visionary prophet of the 1960s, called the “hot” and “cold” media of today.

My series will not only offer some solutions to the above challenges for Mac users, but will also implicitly show how the older methods of research known to the pre-1990sbunch of us can benefit Millennial “app” scholars as much as the latter can benefit those of us seeking to integrate new technology into the old business of knowledge production.

Stay tuned for a series of posts through the end of the spring semester on topics such as PDF management, outlining, syncing annotations to PDFs by quote, page number, and comment, searching your own tagged annotations in Sente and Sente assistant, building outlines and storing information for dissertations and books in Devonthink Pro Office, writing in Scrivener, OPML and outliners, and using your Mac and iPad for succeeding in your academic writing pursuits. 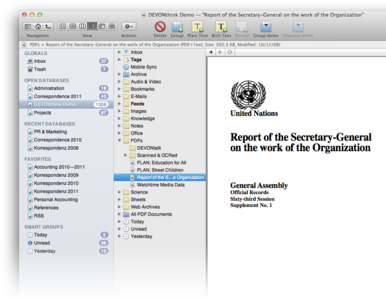