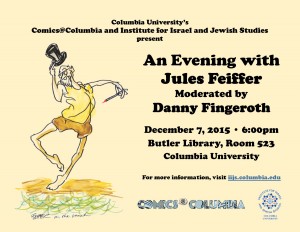 The Institute for Israel and Jewish Studies, in partnership with Comics@Columbia, is delighted to present a conversation with the legendary Jules Feiffer.

Feiffer is perhaps best known for his long-running strip in The Village Voice (1956-1997), but he is also a distinguished playwright and screenwriter, evinced by his Academy Award (for the short film “Munro”), his Pulitzer Prize for Editorial Cartooning, his Obie Award, his lifetime achievement award from the Writers Guild of America, and his induction into the American Academy of Arts and Letters.

Most recently, Feiffer has produced the first volume of a graphic novel trilogy, Kill My Mother, and his career has been celebrated in this year’s retrospective volume, Out of Line: the Art of Jules Feiffer.

Book sales and a signing will follow the talk.