The NAACP Papers database (ProQuest) was added to Columbia’s resources in Fall 2016. It consists of six modules reproducing a wide range of primary source materials from the National Association for the Advancement of Colored People (NAACP). 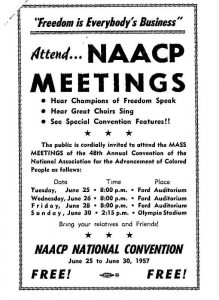 “Nearly two million pages of internal memos, legal briefings and direct action
summaries—the most widely used collection in the Manuscript Division of the Library of Congress—are easily accessed and searched, helping researchers chart the
NAACP’s groundbreaking efforts. With a timeline that runs from 1909 to 1972, users can examine the realities of segregation in the early 20th century to the triumphs of the passage of the Civil Rights Act of 1964 and the Voting Rights Act of 1965, and beyond.” From ProQuest brochure NAACP Papers.

The following online resources have become newly available to Columbia University researchers since September 12, 2016. We hope that you may find something of interest here.

Archives unbound has been enhanced by the addition of the following modules:

Church Missionary Society periodicals has been enhanced by the addition of Module 2: Publications of CMS medical mission auxiliaries.

Colonial America has been enhanced by the addition of Module 2: Towards Revolution. 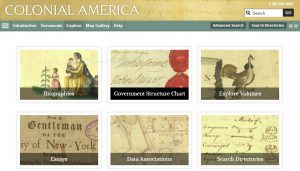 Early European books: printed sources to 1700 has been enhanced by the addition of Collection 4.

National Security Archive (U.S.) has been enhanced by the addition of the following modules:

Shakespeare in performance : prompt books from the Folger Shakespeare Library

We would like to extend a warm invitation to you to attend this year’s Senior Thesis Forum, hosted by the Humanities & History and Global Studies Librarians in Butler Library Room 523 on Tuesday, April 18th, 3:00-4:30. This forum offers graduating Seniors the opportunity to share their research experiences and outcomes in an informal session.

The event is open to all faculty, students, and library staff and we hope you can join us. Light refreshments will be served.

Listed below are the names and thesis titles for our three student presenters:

Danny Echikson
“Sugar Traders, West Indian Slavers, and Corporate Financiers: The Economic History of an American Family at the Turn of the 19th Century”

Martin Ridge
“The Romantic Consciousness: Marxism, Liberalism, and the Education of Marshall Berman, 1961-1970”

Please join us in celebrating the achievements of our graduating seniors!

On behalf of the Humanities & History Librarians, welcome to Butler Library! We all look forward to this time of year, when we welcome and introduce our university community to the extensive resources available in the Libraries. Here are some of our upcoming events and orientation sessions.

“Getting Your Bearings” for Graduate Students

If you’re a graduate student, you may wish to attend one of our “Getting Your Bearings” orientations, designed to help you begin using the powerful information tools at your disposal and to point you to some of the most important library services and personnel at Butler Library and elsewhere on campus.

The Libraries will be offering six “Getting Your Bearings” sessions to introduce graduate researchers to our collections and services.

The second half of the session, which will take place in Butler 306, will be devoted to an overview of the Libraries’ online information system and ways to get the most out of it, and would be of value to all graduate students. Participants who want to attend only the second half should feel free to come directly to Butler 306 about 45 minutes after the beginning of the tour.

Please drop by our Welcome Week table in the lobby of Butler Library.
Tuesday, September 6-9, 12:00pm-4:00pm

Learn about library services for faculty, graduate and undergraduate students and meet our Humanities & History Librarians and our Global Studies Librarians.

We wish you a successful and enjoyable Fall Semester!

This year’s Senior Thesis Forum, hosted by the Humanities & History and Global Studies Librarians, will be held in Butler Library Room 523 on April 6th, 3:00-4:30. This forum offers graduating Seniors the opportunity to share their thesis projects and their research process with students, faculty, and librarians. This year’s event features four students from the Department of History. Faculty teaching thesis seminars, research librarians and curators identify students who have used libraries and archives intensively their projects. A selected number of students are asked to share their experiences and research outcomes in this informal session.

The event is open to all faculty, students and Libraries staff and we hope you can join us.

Conor Goetz
The 1919 Washington, DC Race Riot: The Culmination of Federal Policies, a Press Campaign, and a Changing Population

Sarah Roth
The Miracle at Sokilinki Park?: Corporate Co-Sponsorship of the American Kitchen at the 1959 Moscow Exhibit.

Please join us in celebrating the accomplishments of these students!

Each year, the Humanities & History and Global Studies librarians host a Senior Thesis Forum where undergraduate thesis writers share their research experiences with an audience of other students, librarians, and faculty.  The forum is structured as a panel discussion; and senior thesis writers are asked to speak about how they formulated their research interests and questions, their process of consulting with librarians, curators, archivists, faculty and other sources of support, and their discovery and use of the resources that enabled them to complete their theses.

All humanities faculty and prospective thesis writers are invited to attend! The forum will take place on Wednesday, April 6, from 3:00-4:30pm in Butler Library room 523.

If you are a faculty member advising a senior thesis writer whom you’d like to recommend as a participant, please email:

Archives of the Presbyterian Church of Cuba Online (BrillOnline)
This collection makes available for research the records of the Iglesia Presbiteriana-Reformada en Cuba (IPRC) and predecessor Presbyterian churches and missions in Cuba, including a complete run of Heraldo Cristiano, the church’s newsletter, 1919-2010, which provides a framework for the history of the church.

Colonial America (Adam Matthew)
Colonial America will be released in five modules, organized thematically. We currently have access to: Module 1: Early Settlement, Expansion and Rivalries. This first module documents the early history of the colonies, and includes founding charters, material on the effects of 1688’s Glorious Revolution in North America, records of piracy and seaborne rivalry with the French and Spanish, and copious military material from the French and Indian War of 1756-63. New modules are scheduled for publication annually through 2019, at which point Colonial America will be complete. The complete database will consist of all 1,450 volumes of the CO 5 series of Colonial Office files held at The National Archives in London, plus all extracted documents associated with them.

The John Johnson Collection : An Archive of Printed Ephemera (ProQuest)
“This collection provides access to thousands of items selected from the John Johnson Collection of Printed Ephemera, offering unique insights into the changing nature of everyday life in Britain in the eighteenth, nineteenth and early twentieth centuries. Categories include Nineteenth-Century Entertainment, the Booktrade, Popular Prints, Crimes, Murders and Executions, and Advertising.”

Migration to New Worlds (Adam Matthew)
Migration to New Worlds explores the movement of peoples from Great Britain, Ireland, mainland Europe and Asia to the New World and Australasia. This first module concentrates on the period 1800 to 1924 and covers all aspects of the migration experience, from departures to arrival and permanent settlement. Includes letter collections, travel journals, diaries, audio files of oral histories, scrapbooks, government papers, and many other types of materials.

The following databases have been improved by the addition of substantial new content.

Archives Unbound (Gale)
Archives Unbound has been expanded by the addition of three modules:
1.  Country intelligence reports on China
2.  Political, economic, and military conditions in China: reports and correspondence of the U.S.
Military Intelligence Division, 1918-1941
3.  Records of the U.S. Information Service in China: Chinese press reviews and summaries, 1944-1950

Christian Muslim Relations: A Bibliographical History (BrillOnline)
Christian-Muslim Relations: A Bibliographical History, is a general online history of relations between the two faiths as represented in works written by Christians and Muslims about the other and against the other. It has recently been expanded by the addition of Part II, which covers all parts of the world in the period 1500-1914.

Early European Books: Printed Sources to 1700  (ProQuest)
This resource has been enhanced by the addition of  Collection 2, which contains early printed volumes from the Biblioteca Nazionale Centrale di Firenze (National Central Library of Florence). Collection highlights include more than 770 editions printed by Aldo Manutius and the Aldine Press, founded in Venice in 1495; marginal notes written by Galileo on his own personal copies of works by Euclid, Petrarch, Ariosto, Tasso and Horace; rare first editions of the works of Dante, Petrarch and Boccaccio; volumes by the controversial preacher Girolamo Savonarola; and over 780 16th- and 17th-century editions of sacre rappresentazioni, popular verse plays depicting Biblical scenes, episodes from the lives of the saints and Christian legends.

Music Online: Classical Scores Library (Alexander Street Press)
Volume IV has recently been added to the existing database. Music Online: Classical Scores Library is a series of four volumes with a mission to provide a reliable and authoritative source for scores of the classical canon, as well as a resource for the discovery of lesser-known contemporary works. The collections encompass all major classical musical genres and time periods from the Middle Ages to the 21st century.

ProQuest History Vault. Southern Life and African American History, 1775-1915, Plantations Records.
This resource has been enhanced by the addition of Part 2. The records presented in Part 2 come from the holdings of the University of Virginia and Duke University. This database includes content from two microform series: Records of Ante-bellum Southern Plantations from the Revolution through the Civil War and Records of Southern Plantations from Emancipation to the Great Migration.