All members of the Columbia community with valid UNI/passwords who are traveling (or are simply off-campus) can still access library resources. We are pleased to share the Columbia Global Library Services Research Guide, an overview of the electronic resources and services that you can access from anywhere in the world.

This guide is a work in progress and we’d love to include tips and helpful links from all of you Columbia scholars who have studied or done research abroad. Please email Meredith Levin, Western European Humanities Librarian, mjl2209@columbia.edu, with your suggestions.

We would like to extend a warm invitation to you to attend this year’s Senior Thesis Forum, hosted by the Humanities & History and Global Studies Librarians in Butler Library Room 523 on Tuesday, April 18th, 3:00-4:30. This forum offers graduating Seniors the opportunity to share their research experiences and outcomes in an informal session.

The event is open to all faculty, students, and library staff and we hope you can join us. Light refreshments will be served.

Listed below are the names and thesis titles for our three student presenters:

Danny Echikson
“Sugar Traders, West Indian Slavers, and Corporate Financiers: The Economic History of an American Family at the Turn of the 19th Century”

Martin Ridge
“The Romantic Consciousness: Marxism, Liberalism, and the Education of Marshall Berman, 1961-1970”

Please join us in celebrating the achievements of our graduating seniors!

More info about the Haas Family Arts Library and its collections can be found at http://web.library.yale.edu/arts/collections.

Information about the Borrow Direct service can be found at http://library.columbia.edu/find/request/borrow-direct.html.

Butler Reserves materials and the Media collections have moved from Butler 208 and now circulate from the Butler Circulation Desk on the third floor. This new single service point offers the convenience of one location for borrowing all circulating and reserve books and DVDs.

The Butler Reserves staff office remains in Butler 208A, and staff phone numbers are unchanged.

There are still a few outstanding projects that will be completed in the coming weeks.

· The Reserve Reading sign hanging in the east corridor outside 208 will be changed to Reading Room (to match existing sign on the west corridor), and the “Reserves” signage above the alcoves behind the desk and above the bulletin boards will be removed.

See Borrow Direct for more information about how you can use Borrow Direct to borrow books, scores, and DVDs not available from the Columbia University Libraries.

Come join us for some interesting sounds and experiences!
Friday, 10/21, from 6-8pm, in the Music & Arts Library, 701 Dodge.
(CUID required or contact patterson@columbia.edu to RSVP). 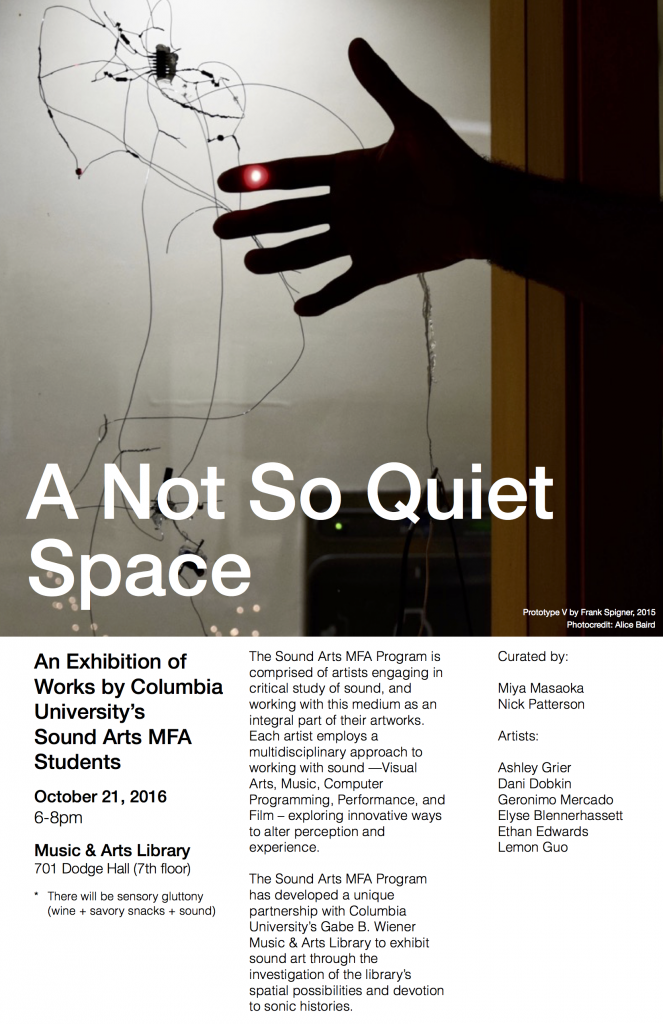 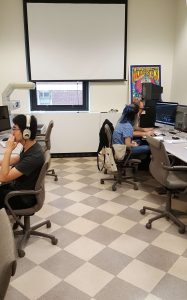 Over the last few months, the video editing facilities at the Digital Humanities Center (DHC) have had a major makeover. The older machines in that room have been replaced by 8 dual screen iMac computers, with a new suite of software on the machines. We now support three editing softwares: Adobe Premiere (along with a full suite of Creative Cloud tools), Avid, and, FinalCut7.

The staff of the center includes graduate students in the Film Division of the School of the Arts, who can provide assistance with many video editing needs.
The environment also enhances our ability to support a variety of other Mac softwares: DevonThink, Sente, NVivo, and Filemaker Pro.

The layout of the room and a ceiling projector also make this available as an instructional space for small groups. The DHC will be offering some video editing, NVivo, and DevonThink workshops here later in this semester, and we are happy to reserve the room for other small groups wanting to organize technology workshops.

The open hours of the DHC are:

In honor of this milestone, I have purposely selected the Criterion Blu-ray release of The Night of the Hunter to receive call number DVD30000.

Originally released in 1955 and directed by Charles Laughton, the film tells the story of a demented murderous preacher named Harry Powell (Robert Mitchum) who decides it is his 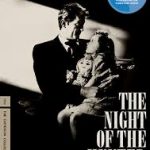 calling to kill widows for their money. After a stint in jail for stealing a car, he learns of a bank robbery gone bad. The robber, Ben Harper (Peter Graves), injured and on the run, decides to hide the money.  He asks that his two young children never reveal where he hid the stash. Harper is taken away and hanged, leaving behind his two young children and wife, Willa Harper (Shelley Winters). Preacher Powell makes his move once he is released from jail in pursuit of the widow and the money. On his right hand, he has tattooed “LOVE” and on his left, “HATE.” As he makes acquaintance with Willa and the children, Harper’s young boy takes notice of the tattoos. The Preacher begins to stalk the children because he believes they know where their late bank-robbing father hid the money he collected. The children don’t trust the preacher and soon understand what he is after. Willa does not and buys his con game and marries him. She is soon dead. In one of the most incredible shots in the film, she is seen at the wheel of a car at the bottom of the river. The children flee and the Preacher is in pursuit. The children find refuge and protection with Rachel Cooper (Lillian Gish), a Bible-fearing elderly woman from the town.

The film opens with a dramatic reading from the Bible by Rachel Cooper in which she warns the children “to beware of false prophets, which come to you in sheep’s clothing, but inwardly are ravening wolves.” (King James Version of the Bible Matthew 7:15). She continues, “ye shall know them by their fruits.”

This was an important role for Lillian Gish who last appeared in a film in 1949 before signing on to The Night of the Hunter.  Other actresses had been considered for the role of Rachel, including Ethel Barrymore, Helen Hayes, Agnes Moorehead, and Elsa Lanchester, Laughton’s wife.

The filmmakers were sensitive to the censors and religious groups. They worked to make sure not to give the impression that the Preacher was an ordained minister. James Agee is credited with the screenplay. Laughton also worked with Davis Grubb on character and plot points. Grubb wrote the book of the same title (NY, 1953) on which the screenplay is based.

Since its release, the film has earned critical acclaim and a faithful following. But the film was not a financial success during its theatrical release making it difficult for Laughton to be considered for future projects. This was his first and last film as director. He continued to act in feature films following The Night of the Hunter delivering memorable performances in Witness for the Prosecution, Spartacus, Advise and Consent, and Galileo.

In later appreciations, Rogert Ebert called The Night of the Hunter one of the greatest of all American films. He noted it never received the attention it deserved.  A.O. Scott, film critic for the New York Times, looked back on the film several years ago and described it as “a hybrid of a folk tale and a film noir, but true to its own vivid and haunting reality.”

In 1992, the film was added to the National Film Registry at the Library of Congress. 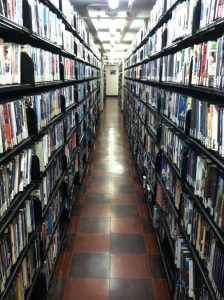 The Criterion Blu-ray includes a number of interesting special features. A short film entitled The Making of The Night of the Hunter, Simon Callow on Charles Laughton, and an excerpt from the Ed Sullivan Show (September 25, 1955 episode) in which cast members perform a deleted scene. There are also hours of outtakes and behind the scenes footage.

The Night of the Hunter, DVD30000, is available from the Butler Media Research Collection located in Butler Reserves, 208 Butler.

The researcher follows many paths in search of scholarly information — chasing down specific items recommended by colleagues using CLIO and the Catalog, using the same tools to follow the footnotes and delve into an author’s sources, searching in Google Scholar, Web of Science, Scopus, or collections of online full text to follow the footnotes “forward,” (i.e., to see who else has cited a work), or mining gateways like EbscoHost and Proquest or individual databases for their field to discover works that have been written on a particular topic. A less systematic, but often equally fruitful approach has long been serendipity, the chance identification of relevant or related material that frequently occurs when one is browsing a collection, say, while looking for a particular item on the shelves in the library stacks and notices another interesting title just a . In recent decades, with the movement of much material to offsite collections and the replacement of more and more print texts by online electronic ones, many scholars have lamented the declining opportunities for this kind of tangential discovery.

Happily, Columbia and other libraries have been circling back to a revival of this approach.

A wonderful, though still little known feature of our current online catalog is the option it provides for a Virtual Shelf Browse. When a full record is displayed on the bottom of the screen, the shelf browse option appears at the bottom of the page, and can be turned on by simply clicking a button. One can then browse back and forth along a virtual shelf that brings all of Columbia’s library departments together.

Browzine is a tool that seeks to enhance the declining opportunities for serendipity in our periodical reading rooms, as more and more titles become available in online format only. Browzine works with an impressive list of publishers to bring many (but far from all) of the journals in our collection into a library from which individual titles can be retrieved and browsed, starting with the most recent issue. Individual articles can be displayed on screen and then downloaded to one’s desktop or captured using a citation management software like Zotero.

After creating a user account (don’t use your Columbia password!), a reader can place the journals most likely to be consulted on a four personal bookshelves. An app for portable devices can also be downloaded, enabling users to sync to their online account and download and read articles there.

The number of publishers working with Browzine is growing. If there is a journal that you would like to see included here, feel free to contact us at rhs1@columbia.edu.

Review the hours, access information, and policies for an institution prior to your visit: Borrow Direct Plus On-Site Borrowing. When visiting one of these libraries, just show your Columbia ID. You’ll be asked to log into your Borrow Direct account to verify your eligibility. Once verified, you’ll get your library borrowing card.

The next time you visit one of these universities, visit its libraries and check out what you can borrow!