For the occasions of Women’s History Month and International Women’s Day, celebrated on March 8th, I sat down with Sarah Witte, our Women & Gender Studies Librarian, and Yuusuf Caruso, our African Studies Librarian, and asked them about resources that the Columbia Libraries makes available to researchers interested in women and gender studies at the global level. 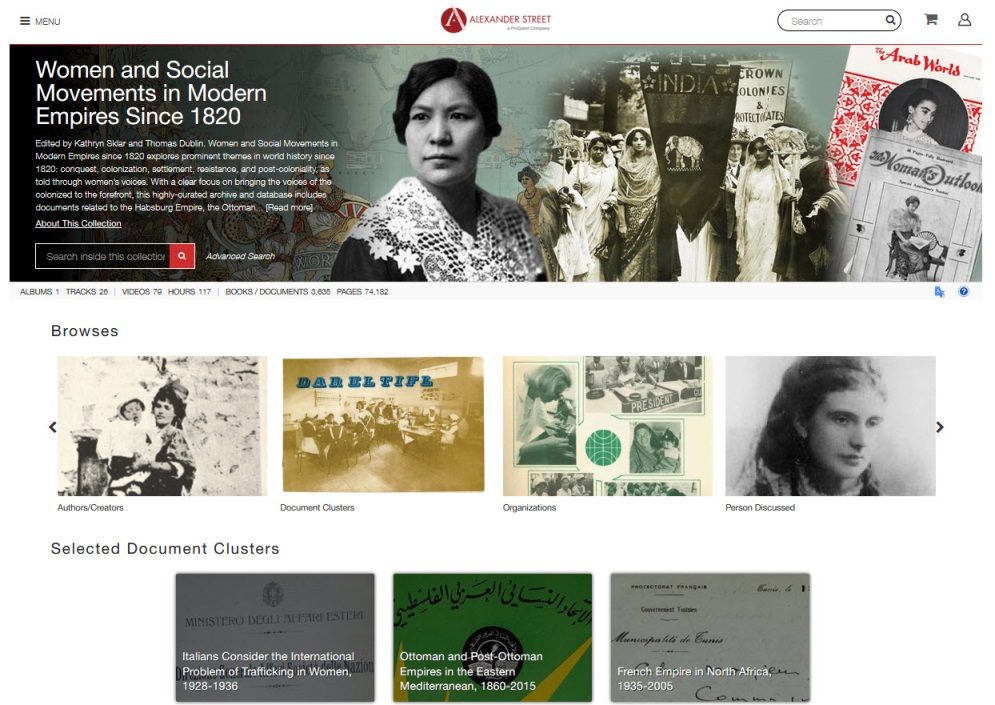 What are your recommended resources for getting started with research?

SARAH: Ebscohost Research Databases. “This is a platform of core subject databases, including Gender Studies Database, LGBT Life, Historical Abstracts, Index to Legal Periodicals, Anthropology Plus, Art Source, Film and Television Literature Index, ATLA Religion; as well as interdisciplinary databases focused on specific regions: Bibliography of Asian Studies, and Middle Eastern & Central Asian Studies, Africa Wide, and American Bibliography of Slavic and East European Studies. It is a resource for scholarly work on virtually any topic related to women, gender, sexuality and feminism, though the literature it indexes is primarily in English.”

YUUSUF emphasized the need to carry out research based on print and subscription-based holdings at the Libraries while supplementing them with open access research publications on gender and social equity, environmental sustainability, economic security, sustainable and ethical agriculture and trade, and the role of NGOs and grassroots movements. In addition to the EBSCO suite of index databases mentioned by Sarah, he cites the African Women’s  Bibliographic Database (Leiden);  online journals:  Feminist Africa;  Agenda—a journal about women and gender;  and, New African woman ;  web sites:  CODESRIA-Council for the Development of Social Science Research in Africa (Dakar, Senegal), with over 230 online full texts on African women and agriculture; African Women’s Development Fund (Accra, Ghana);  Forum for African Women Educationalists (Nairobi, Kenya); and, Gender Links for Equality and Justice (Johannesburg, South Africa).  For historical research at Columbia on women, gender, and sexuality in Africa, see:  Gender and Sexuality in African History.

What new research interests and trends have you noticed in women’s and gender studies at Columbia, and what new or timely resources are available to researchers?

SARAH emphasized a number of areas of strong research interest at Columbia, including: national and transnational feminist movements, inter-generational trauma, menstrual health and justice, rights for sexual minorities, for diaspora and immigrant communities, to name a few. She also stressed the growing interest of researchers in alternative forms of documentation and grassroots testimony, including personal narratives, oral histories, letters, memoirs, film, art and literature.

“Women and Social Movements, Modern Empires Since 1820, from Alexander Street Press is a new full-text database that seeks to explore themes in world history since 1820: conquest, colonization, settlement, resistance, and post-colonialism, through the voices of individual women.  It includes more than 50 curated document clusters organized by theme, time period and empire, including the Habsburg, Ottoman, the British, French, Italian, Dutch, Russian, Japanese, and United States Empires, and settler societies in the United States, New Zealand and Australia.  It includes a variety of sources: 93 issues of L’Egyptienne, an Egyptian feminist and nationalist journal published from 1925 to 1940, transcripts of interviews with women activists in South Africa, Guatemala, Romania, and the United States, manuscript letters in Arabic with English translations.  It is a companion database to Women and Social Movements International: 1840 to present, which focuses on international organizations.” 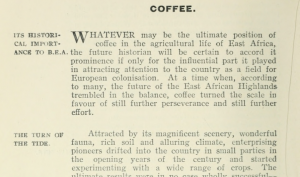 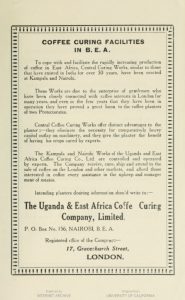 It is no secret that coffee, and agriculture in general, were a major factor in setting up colonies in East Africa. These excerpts are from: Farming and planting in British East Africa: a description of the leading agricultural centres and an account of agricultural conditions and prospects / compiled and edited by T.J. O’Shea, Nairobi : Newland, Tarlton & Co., Ltd., 1917.

YUUSUF: Stressing emerging areas of scholarly relevance, Yuusuf highlighted women’s development, labor movements, and gender-related social and economic justice movements in Africa.  Then noticing the cup of coffee I held in my hand, he smiled and said: “So for example, if you were interested in something as mundane as the provenance of that cup of coffee …and women’s roles in our world, assuming this is coffee imported from Africa,  you may want to consult a few recent publications for starters available in the Libraries, such as:  the 2018 Coffee Atlas of Ethiopia, which documents the sources of Ethiopia’s coffee production ;  A Good African Story, an incisive insider account of a successful African-owned coffee company in Uganda (the company’s website features articles and links to interviews about different aspects of the coffee business, including the role of women’s cooperatives);  a chapter on the same company in a 2018 book on Africapitalism: rethinking the role of business in Africa offers an analysis of the attempt to transform Uganda’s and even Africa’s role in the coffee industry—from being merely exporters of green beans to becoming exporters of high-quality roasted and packaged coffee that can be bought straight off shelves in Europe ; plus, two case studies:  Rita Verma’s Gender, land and livelihoods in East Africa: through farmers’ eyes and Kiah Smith’s Ethical trade, gender, and sustainable livelihoods: women smallholders and ethicality in Kenya,  which examine social and economic issues surrounding women and cash crop farming in post-colonial and 21st century Kenya.”

Yuusuf also had tips on how to conduct productive searches in the Library catalog and in other databases. One is that –because the issue of “women farmers” is often lumped in with that of agricultural development in general—there are few books with LC subject headings “women farmers” for African countries. Hence, the best search strategy might be to use “Women Agriculture [name of country]” as keywords in “all fields”.

There’s a lot to think about the next time you head out to grab that cup of coffee!