Dr. Manan Ahmed is Associate Professor of History, and Member of the Committee on Global Thought at Columbia University. Manan Ahmed ‘s areas of interest and specialization include Muslim intellectual history in South and Southeast Asia; critical philosophy of history, and material culture;  the relation between text, space and narrative with a special focus on the history of Islam in South Asia. Manan Ahmed is the author of A Book of Conquest: Chachnama and Muslim Origins in South Asia (Harvard University Press, 2016) and the forthcoming The Loss of Hindustan: Tarikh-i Firishta and the Work of History (Harvard University Press, 2020). Ahmed is the co-founder of the Group for Experimental Methods in the Humanities at Columbia, and his work in digital history focuses on spatial and textual understandings of the medieval past. I sat down with Dr. Ahmed and asked him a few questions related to the Muslim World Manuscript (MWM) project.

Q: What is the added scholarly and pedagogical value of teaching with material culture, and how do you see this value exemplified both in the content of the MWM manuscript collection and in its various uses at the University?

Specifically for pre-modern manuscript cultures, the surviving codices, scrolls and other textual materials are essential for our attempts to re-construct and understand the social worlds from which the codices originated and through which they are handed down to us. The manuscripts included in the MWM project come from a number of extremely rich and varied traditions of inscription, copying, emendation, commentary, and illustration. Individual copies have also had their own very complex individual trajectories, and micro-histories, before landing here in our libraries. They hold within their pages the traces of the various “cultural entanglements” that marked their origins, their paths and “previous lives”, including the present ones at our libraries and our university—if only to mention some very basic mundane details, note the call number assigned to the manuscripts, their inclusion in a specific repository or sub-collection (E.G. Smith-Plimpton, or X collection, etc.). The manuscripts are witnesses to many disjunctive spatio-temporalities of engagement and interest, and they embody clear traces of that engagement within their leaves, of course in terms of their content, but also as material objects in their own right. The items in the Columbia Libraries collections, as with many collections of Islamicate manuscripts, also exemplify long-standing traditions of “re-mixing” and long-standing cultural dialogues and exchanges. For example, we see in this collection many clear instances of ways in which different textual corpora were re-stitched as anthologies with added commentaries, sometimes commentaries on commentaries, or abridged versions to be commented on and expanded on yet again. We see sharhs expanding on a previous work;  We sometimes see some works summarized, and expanded on again, and then reaching a different audience all together.

Q: Can you give us an example of how these manuscripts bear witness to, or constitute vessels for the transmission of these multi-layered engagements and exchanges?

Sure. Take a most basic example that illustrates the widespread and common, basically routine, multi-linguism in most parts of the Islamicate worlds: consider Ms. Or. 222, which is a Quran with Persian translation of the meaning of the Quranic verses, interlinearily inserted onto the text. There is the gloss on each word, but there is also the world of metaphors, similes, the indexical references that help the reader understand how to approach the words of the Qur’an. This is not merely a “translation,” but rather a process of transculturation. We have here a layout composed of 22 gold-ruled lines alternating full and half height, with Arabic in the full height and Persian in the half-height. At the center of the page is a line (sometimes not a complete Sura) written in golden ink, when the original Arabic is in black, and the Persian is in 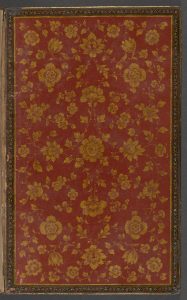 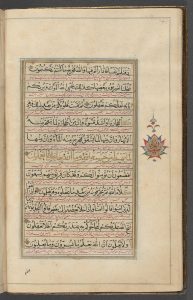 red. Looking at a small detail such as the choices behind the layout of the pages, the size and colors of each line, brings home the complexity and richness of these societies: it also clearly exemplifies how material culture was put at the service of embodying and exemplifying, as well as solidifying crucial tenets and practices of these societies. The script can be used for aesthetic effects and visual appeal, but it is also put at the service of deeply ingrained functionalities, in this case, clearly delineating a translation of the meaning of the Qur’an from the text itself, any translation of Quranic verses being considered an interpretation within Islamicate societies.

Another small example of multiple influences and styles that is also a clear illustration of the richness and diversity of the societies that produced these manuscripts may be Ms Or 215, a small miniature Qur’an copied in the late 18th c probably (the date is not clear). Although the illumination of this miniature Mus’haf (miniature Qur’ans were commonly made to be carried around on journeys by pious individuals) suggests a Persian style, the final flyleaf has an English inscription claiming that it was “Made in Syria.” Given its likely late-18th century date, if this provenance info is correct, this Mus’haf may reflect  a Persian-Syrian style that prevailed in Wilayat Halab, Aleppo in the 18th c., and which became known as  Isfāhānī-Ḥalabī style. If this can be ascertained, and it certainly needs a closer look, this may provide a small entry point onto a mixed style, reflective of cultural exchanges, and of aesthetic renditions of multiple cultural influences that the cosmopolitan 18th c. Aleppo certainly witnessed. 18 th c. Aleppo was a true hub of commercial activity with dedicated trading headquarters for may nationalities in many parts of the city (Dutch, Veronese, etc.). If the provenance of this object is indeed accurate, then I find it extremely moving that this small fragment of this way of life in cosmopolitan 18th c. Aleppo has survived and is handed down to us in this manner. It is small things like these that can help students better understand a period, imagine the ways of life that we try to teach them about in our classes. Trying to establish a relation of curiosity and inquiry with respect to any given period, to cultural practices and ways of life, is what we are in fact trying to instill in our students. And there is no better way to spark that curiosity and intellectual fire than to encourage an engagement with an object or a manuscript. This engagement allows complex ideas to become more accessible to us, but it also allows our imagination and understanding to expand.

Q: Could you please give us a couple of examples that come to mind regarding how some of these manuscripts exemplify, embody and reflect these various forms of “circulation”, and how this relates to your teaching?

Sure. I just gave you a few examples of how material culture could be activated in the classroom, to the effect of a wilder imaginative ability, and hence a deeper understanding. But here is one more:  take MS Or 38.This is a translation of a famous 12th c. treaty on arithmetic. The original treaty is a pedagogical text by Bhaskara written in Sanskrit in 1150. The current copy we have in our collection is a translation of that work into Persian, which was copied in Lahore, in 1711, probably after another (earlier) Persian copy. The translation into Persian was originally commissioned in 1587 by Emperor Akbar (Akbar, Emperor of Hindustan, 1542-1605), and executed by Fayz̤ī, Abū al-Fayz̤ ibn Mubārak, 1547 or 1548-1595, translator ابو الفیض بن مبارك فیضى,, who was the poet laureate of the Mughal empire. This particular manuscript in our collection is dedicated to Muḥammad Shāh ruling in Lāhore. This is most probably Bahādur Shāh I, 1643-1712 of the Mughal Empire, and it is fascinating that this copy must have been dedicated to Bahadur Shah just one year before his passing in 1712, and landed in our collection. The translation is a fascinating bit of rendering that makes us aware of how scientific knowledge and social strictures intertwined at the Mughal court. This is a pedagogical text, so there are exercises for students, as well as helpful answers and hints, and extensive marginalia, indicating active usage, all of which inform us of the architectures of knowledge production and transmission in eighteenth century Mughal Hindustan.

Q: Are there any parts or sub-parts of the collection you plan to research or publish about?

While there are specific manuscripts I am interested in and have taught in my classes, I am interested in the collection as a whole and particularly in its provenance. I find the question of how provenance of these manuscript collections relates to the overall picture of the interest in the “Orient” and in “Oriental studies” at academic institutions in the early 20th c.  fascinating. Broadly speaking, what is interesting about this collection I think is how it reflects the trajectory of interest in “Oriental studies” in the North East in general. Unlike many of the European Islamic manuscript collections which were formed much earlier for the most part, this is a pretty recent collection, a late comer on the scene so to speak, and one mostly born out of a pedagogical interest at the University. Many of the pieces were acquired or donated for the most part for their intellectual and pedagogical value, rather than their aesthetic or monetary value, or rarity.  Teaching of Arabic, Hebrew, Syriac, Sanskrit, and Avesta began in the 18th c. and was offered in a systematic way since about the mid 1880s, perhaps about 1886-87, in what was known then as the “Oriental Department”. The Oriental department focused mostly on   Semitic and Indo-Iranian languages, and then went on to expand to include Armenian, Turkish, Persian and Kurdish. The interest was mostly philological, linguistic and to some extent religious studies, as in “world religions”, as a category of study….Can you imagine? When you think about how much meaning and centering/decentering is implicit in this, it is pretty amazing…

The twentieth century saw the growth of this collection with major collections entering the Libraries, including the Smith/Plimpton, the biggest core of the Islamic manuscript collection. But we also have very interesting minor purchases/donations and acquisitions, such as the stunning manuscripts bought from Reinhardt (for the most part “luxury pieces” of high aesthetic value). So it would be great to track the trajectories of these collections, not only how they made it into our collections, but also before they made it to the collectors, and then to Columbia. This is important to trace for some highly significant scholarly or rare or aesthetically pleasing manuscripts. But I am also interested in the “fragments”, and how these fragments were presented, used, and passed on. An intriguing naming for me is the X Collection (X collection organized by language according to the Dewey library system, and with an X in front of the Dewey numbers to reflect the language classifications). What practices of organization were adopted, and what do they tell us about the politics of knowledge production and representation in North American universities and libraries? I am particularly interested in uncovering what relations may have existed between CUL’s collections and other collections in the city and in the North East, say the Morgan Library collection or the NYPL collection? I think this is a worthwhile project to pursue: the idea of provenance, and how it is linked to the establishment of “Near Eastern” or Middle Eastern and South Asian studies in this country. We have a lot to learn, and a lot to uncover there.

For inquiries regarding the Muslim World Manuscript project at Columbia, please contact:

One thought on “The MWM Project: Space, Text and Narrative: An interview with Dr. Manan Ahmed”