The year 2021 marks the 75th Anniversary of the founding of the Russian Institute–today’s Harriman Institute–at Columbia University.   As part of the program connected with this important milestone, the Institute has organized a Harriman Atrium exhibit on the 12th floor of the International Affairs Building focused on the building of the library and archival collections that support this multi-faceted program.  The exhibit runs from September 7-October 26, 2021 (unfortunately, due to COVID, the physical exhibit will be accessible only to current Columbia affiliates), with a web-based version now in-process.

The anniversary will also be marked by a collection of essays, to be published in the journal Slavic & East European Information Resources in December of 2021. 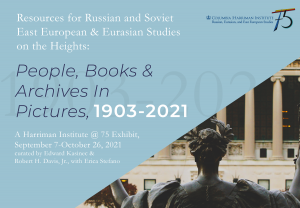 The exhibit traces the origins of Columbia’s Slavic and East European holdings to 1903, and highlights important collectors, donors, and other personalities who have contributed to these outstanding collections over the past 118 years. 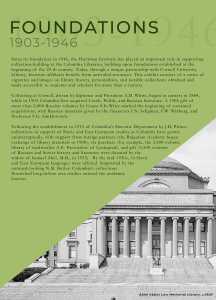 Panels and “vignettes” take the narrative from the turn of the century, through the interwar years, the dynamic period from 1946 into the immediate post-Soviet era, and down to the present.  The Russian Institute’s founders understood the importance of 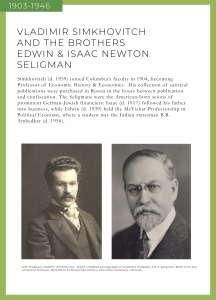 developing library and archival collections, and in 1946 they established (and initially funded) the position now known as the Librarian for Russian, Eurasian, and East European studies.  They supported travel by Columbia’s bibliographers throughout Eastern Europe and the Soviet Union, contributing greatly to the richness and diversity of the collections available today.

Receiving special attention in the exhibition is the close historical interplay with Cornell University Library.  The origins of Cornell’s Slavic collecting extends back to the 1880s, and since 201o a formal coordination of collection-building has tied these two great collections ever closer.

Collaboration has allowed greater flexibility in the acquisition of distinctive retrospective materials and collections (so-called “destination collections”) that build on historical strengths (such as Cornell’s Human Sexuality Collections), or that support important curricular initiatives (such as Columbia’s Ukrainian Studies program). 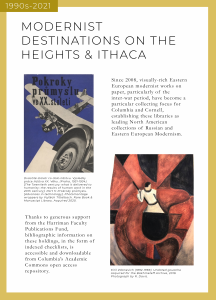 Today, these collections are among the largest and most comprehensive in North America, with Columbia’s holdings at more than 521,362 records for vernacular materials in sixty-six Eastern European languages (including forty-one languages of the Former Soviet Union), while Cornell’s holdings total 271,665 items, of which 70% are in Russian.

The Libraries look forward to the next 75 years of continued close collaboration with the Harriman Institute.