In honor of New York’s Fashion Week, we begin a series of posts on style, fashion, and dress. While most people do not associate John Jay and his circle with high fashion, the correspondence and papers of the Jay family and friends are replete with references to such "frivolous" things. Sally Jay, for example, was a well-known style maker. Jay himself was very conscious of his appearance and sophisticated in the language of dress.

Here is an excerpt from a letter written by Sally Jay to her friend Mary White Morris, wife of Robert Morris, the financier, of 14 November 1782. The Jays were living in Paris and Sally was eager to send home news of the latest Paris fashions to Mrs. Morris.  In the days before fashion magazines and, of course, blogs, this was a common way for news of the latest styles to spread. Sally, although appreciating French fashions, clearly had a strong opinion of what was suitable for American tastes and standards.

If during my stay in Paris it is in my power to serve you, nothing my dr. Mrs. Morris can give me greater pleasure than receiving yr. commands– at present the prevailing fashions are very decent & very plain; the gowns most worne are the robes à l’Angloise which are exactly like the Italian habits that were in fashion in America at the time I left it– The Sultana, resembling the long polinese is also à la mode, but as it is not expected that ^it^ will long remain so, every body makes them of slight silk– There is so great a variety of hats, Caps, cuffs &c. that it is impossible to describe them.– I forgot to mention that the robe ^à^ l’Angloise if trimm’d either with the same or with gauze is dress, but if intirely untrimm’d must be worn with an apron & is undress: negligees are very little in vougue: fans of 8 or 10 sous are almost the only ones in use.–

The robe à la Anglaise featured a close-fitting bodice and open overskirt, which revealed a matching petticoat. Unlike the robe à la Française, the bodice did not have a “Watteau” or draped back. Aileen Ribeiro, Dress in Eighteenth-Century Europe, 1715-1789 (New Haven, Conn.: 2002), 222. 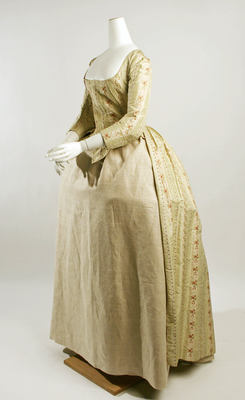 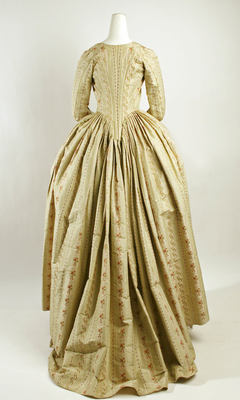 The sultana, alternately sultan or sultane, was a robe or gown in the (fancifully) Turkish style, fashionable from the late seventeenth century to the eighteenth century. OED on-line.