While taking notes on John Jay’s Circuit Court Diary, I came across a brief entry, which at first glance, seemed fairly typical of the information that Jay recorded in his journal. Penned in the fall of 1790, the single line read as follows:

Much of my work on the diary consists of transcribing and annotating passages like this one. As Jay crisscrossed the northeastern states on behalf of the U.S. Supreme Court, he filled his journal with evaluations of tavern food, service, and accommodations, as well as notes on road conditions and distances between towns. The diary therefore often reads like a regional travel guide — an 18th century combination of TripAdvisor and Yelp.

Yet this particular entry had me asking questions that made it anything but a routine exercise. First, the identity of Phelps proved troublesome because at least three different tavern proprietors in the region shared this surname. Moreover, the tavern’s location presented a second problem; beyond the fact that the Green Woods was situated in Connecticut, very little information existed about it. I was therefore uncertain whether the Green Woods referred to an actual forest or town or a larger geographic area. Setting aside the Phelps Tavern for a future blog post, I will focus for now on the mysterious Green Woods.

Riding the Eastern Circuit and presiding over federal court cases throughout New York and New England ranked among Jay’s more unpleasant duties as the nation’s chief judicial officer. Jay was forced to forgo the comforts of home and family as he embarked on a grueling eighty-day trek that took him to court sessions in Albany (Oct. 4-5), Hartford (Oct. 22-26), Boston (Nov. 3-5), Exeter, N.H. (Nov. 20-24), and Providence (Dec. 4-7). By the time Jay returned to New York City, he had covered a distance of some 860 miles.

Jay’s itinerary began with a trip up the Hudson River Valley to Albany and then turned southward before crossing into neighboring Massachusetts and continuing into Connecticut. Jay had been on the road for two weeks and was en route to Hartford when he stopped for an evening meal in the Green Woods on October 13. The diary’s recording of his travels in Connecticut helped to pinpoint the general location of the Green Woods. Since he left Norfolk on October 12 and arrived in Simsbury three days later (see map below), I concluded that the Green Woods must be located in the vicinity of these towns. 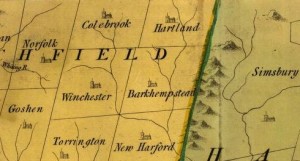 Moses Park, The Plan of the Colony of Connecticut (1766)

Primary sources in the form of newspaper advertisements and Jay’s personal papers shed more light on the Green Woods. Items from the local press suggest that the Green Woods was a region comprised of mountainous, winding terrain. For instance, a notice in the Connecticut Courant informed readers that one Caleb Bull had been hired to repair a section of road that ran through the Green Woods from New-Hartford to Norfolk.[2]  Sarah Livingston Jay mentioned the Green Woods in a letter penned to her husband in early June 1792.  Jay was then riding the Eastern Circuit and was considering whether he would alter his route and travel from Providence by boat rather than by horseback. Upon learning of this development, she observed that his revised plans would deprive him “the superlative pleasure of traversing the ^green^ woods.”[3]

While her comment certainly points to the region’s sublime scenery, it also sardonically alludes to the arduous conditions awaiting those travelers who passed through northwestern Connecticut. A state-sponsored history from 1933 that discussed the construction and use of roads in colonial Connecticut described the Green Woods as an “impenetrable wilderness” found in northern Litchfield and Hartford Counties that was filled with “deep and narrow valleys, jutting cliffs, rugged and precipitous declivities, all thickly covered with dark forests of evergreens.”[4]  Collectively, the information gathered from the primary and secondary sources provided me with both the location and a physical description of the Green Woods, an area frequently visited by Jay on his circuit rides. Moreover, these documents prove invaluable because they help us to better comprehend the rigors associated with overland travel in eighteenth-century America.