We tend to imagine taverns as spaces of drinking, merrymaking, and leisure. Yet in the eighteenth century, taverns also served as essential places of rest for weary travelers, including those like Jay, who traveled far and wide on the business of the new nation. Although justices of the Supreme Court today hear their cases in Washington, D.C., the first justices, including Jay, had to do what was called circuit riding. For Jay, who was in charge of the Eastern Circuit, this entailed sometimes exhausting stints of travel across New England and New York to preside over court sessions.

The fact that Jay had to ride circuit puts Jay’s frequent—and sometimes critical—comments about public houses in his circuit court diary into new perspective. Jay spent many nights in taverns and inns, and the conditions he found could determine whether he would get a good night’s rest or something less desirable. In particular, Jay patronized various establishments owned by the Phelps family in Connecticut, including those located in the Green Woods. As we’ll see, looking into the history of these establishments sheds light on what Jay was looking for in lodgings, as well as the history and significance of taverns and inns in the early United States.

The earliest Phelps who settled in New England arrived in 1630 and hailed from Tewkesbury in Gloucestershire, England.1 Shortly thereafter, the family migrated to Windsor, Connecticut, where they prospered and became prominent in politics. One William Phelps (1599-1672), for example, served as an assistant magistrate for the colony.2 By the time of the American Revolution, the Phelps could be found throughout Connecticut, residing mostly in Hartford and Litchfield Counties.

Tavern-keeping proved a popular occupation for family members. By 1800, there were at least four Phelps taverns situated in northwestern Connecticut and located within twenty-five miles of one another. It is therefore probable that the Phelps proprietors would advise Jay and other patrons to stay with their relatives in the region. 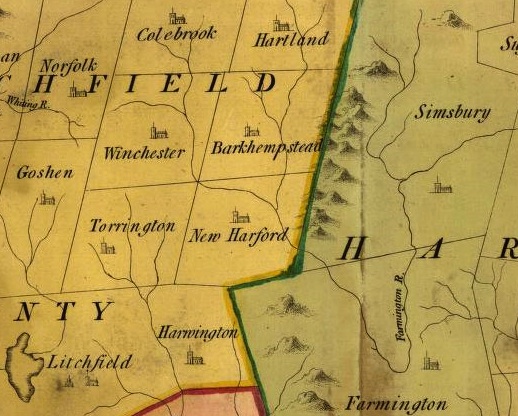 Moses Park, Plan of the Colony of Connecticut (1766)

Darius Phelps (1752-1818) kept a public house in Norfolk, which served as the meeting place for the local chapter of Freemasons.3 In nearby Colebrook, Arah Phelps (1761-1844) ran an inn built in 1787 that later became known as the Red Lion.4 Upon obtaining a license in 1786, Noah Phelps (1740-1809) of Simsbury in Hartford County opened a tavern in the home formerly occupied by his brother Elisha Phelps (1737-1776).5 A fourth Phelps tavern was located in Litchfield. Built by David Buell in 1787, the impressive three-and-a-half story structure was acquired by John Phelps (1756-1833) nearly a decade later.6

Phelps Tavern (torn down in 1939), Litchfield, Connecticut, Library of Congress

Timothy Dwight, the president of Yale College, noted the potential dangers of staying at a public house, describing it as “a place where travelers must trust themselves, their horses, baggage and money.”7 At the same time, the public house played an important role in the local community. In addition to selling alcohol to residents, this establishment also provided them with a space for civic, commercial, and cultural activities. The person running a tavern or inn had a social responsibility and had to be concerned with more than just making a profit. Dwight observed that in Connecticut, those who operated a tavern “must be recommended by the selectmen and civil authority, constables and grand jurors of the town, in which he resides; and then licensed at the discretion of the court of common pleas. . .In consequence of this system, men of no small personal respectability have ever kept inns in this country.”8 In the eyes of the law and local citizenry, tavern keeping was not an occupation to be taken lightly.

Jay certainly did not take his visits to taverns lightly. Jay would seek out establishments that were clean, orderly, and inexpensive. The travel diary shows that the Phelps taverns and inns generally met with Jay’s approval. For instance, on 15 October 1790, he dined with Noah Phelps in Simsbury and rated the establishment as a “pretty good house.”9 Two days earlier, Jay had eaten supper in Colebrook, which he identified as the “Gr[een] Woods,” at the inn owned by Arah Phelps. Apparently pleased with his meal, Jay recorded that the house was “tolerably clean.”10 He returned to this same place several months later in June 1791. Unfortunately, this visit proved less satisfactory than the previous one. Jay recorded in the diary that his dining experience was “not very good.” After his evening meal in Colebrook, Jay rode some six miles to Norfolk and lodged at the inn of Darius Phelps. He rated his overnight stay at the Norfolk house as “pretty good.”11

Although no longer operating today, the Phelps inns and taverns have not disappeared from the landscape. The house run by Arah Phelps still stands in the Colebrook North Historic District near the intersection of Route 183 and Prock Hill Road. 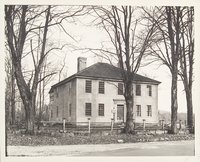 The tavern of Noah Phelps, managed by three generations of his family for nearly sixty years, currently operates as a museum overseen by the Simsbury Historical Society. 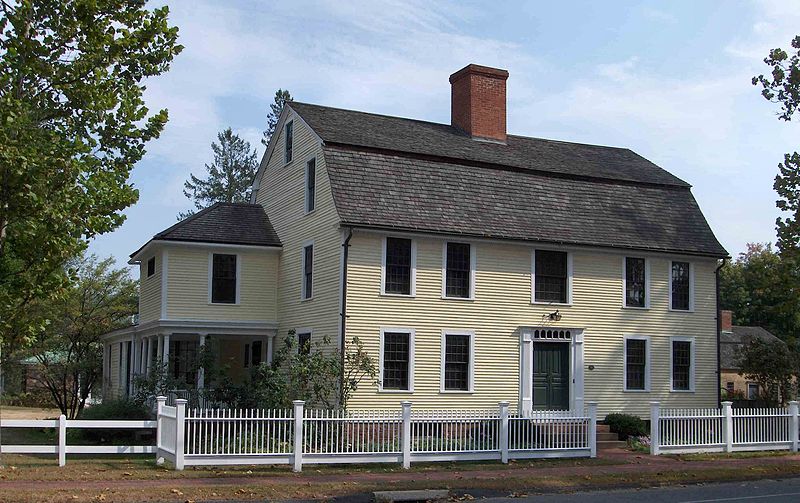 It is fortunate that a few signs advertising the services of the Phelps inns and taverns have also survived. The Simsbury Historical Society, for instance, has one that displays an American eagle and bears the name of proprietor Jeffrey Orson Phelps (1791-1879), the grandson of Noah Phelps. 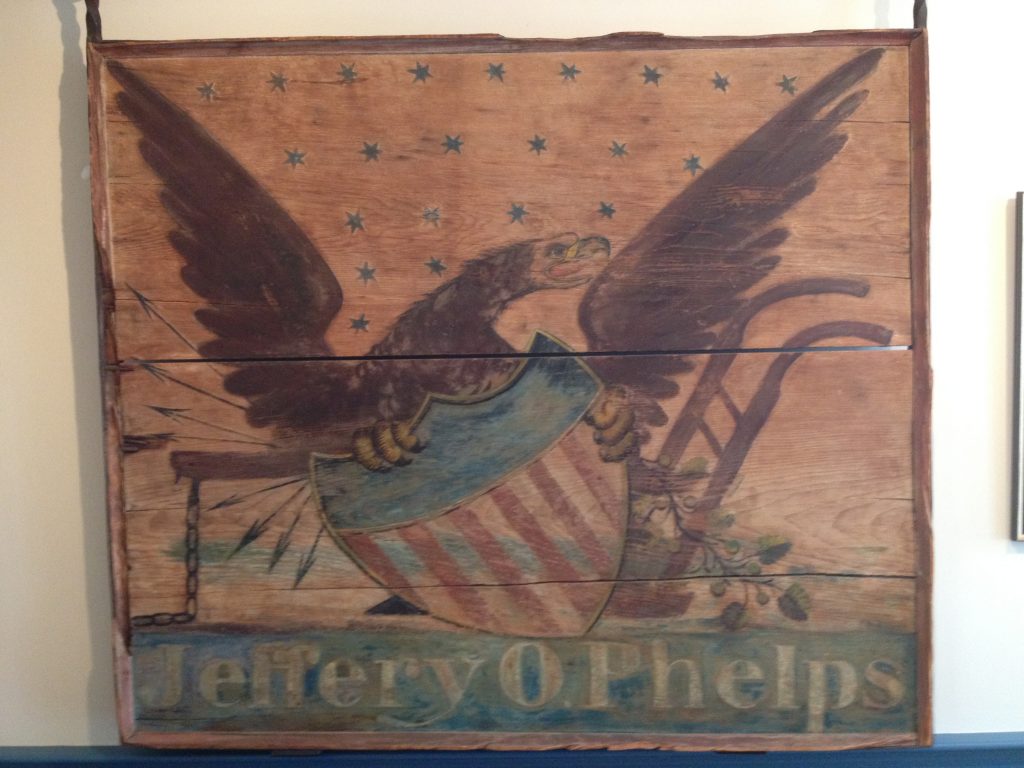 The above piece was painted by William Rice (1777-1847) of Hartford, a prolific artist of Connecticut tavern and inns signs. Rice was celebrated for his “large signs, bold imagery, vivid colors, and a dazzling repertoire of special effects.”12 He completed dozens of these two-sided compositions in the early 1800s, including twenty signs still in existence. His surviving work includes the Arah Phelps Inn of Colebrook, shown below,  which boasts an eye-catching design with a red lion on one side and an eagle on the other. 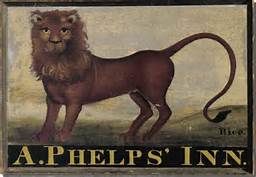 The Arah Phelps piece, along with sixty-five other tavern signs, are housed at the Connecticut Historical Society in Hartford.

John Jay would not have seen these two particular signs since they were created decades after he visited the Phelps houses in Simsbury and Colebrook. Nonetheless, their design and imagery illustrates their potential for attracting travelers in search of shelter, food and drink. In his diary, Jay described two such signs that caught his eye while he was passing through an area near Enfield, Connecticut, in the autumn of 1791. He noted the presence of an inn painted brown that “looks well” and bore the sign of “7 Stars.” He observed another house owned by “Reynolds” that was “painted of a light Stone Color” and had a sign of “crossd. Keys.”13 If Jay ever planned a return visit to the environs of Enfield and was in need of lodging and dining, he could consult the above diary entry and view the available options. For Jay, it was important to do what he could to ensure his comfort on long and frequent journeys.