Editor’s Note: We are pleased to welcome David J. Dzurec as a guest contributor to the John Jay Papers Blog. David Dzurec is Chair of the History Department at the University of Scranton. This post is adapted from his recent book Our Suffering Brethren: Foreign Captivity and Nationalism in the Early United States (University of Massachusetts Press, 2019).

Mere months after the end of the American Revolution, two American ships, the Maria and the Dauphin, carrying a total of twenty-one crewmen, fell prey to corsairs from the North African nation of Algiers. The captured Americans were carried to Algiers and sold into slavery until sufficient funds could be raised to purchase their freedom. 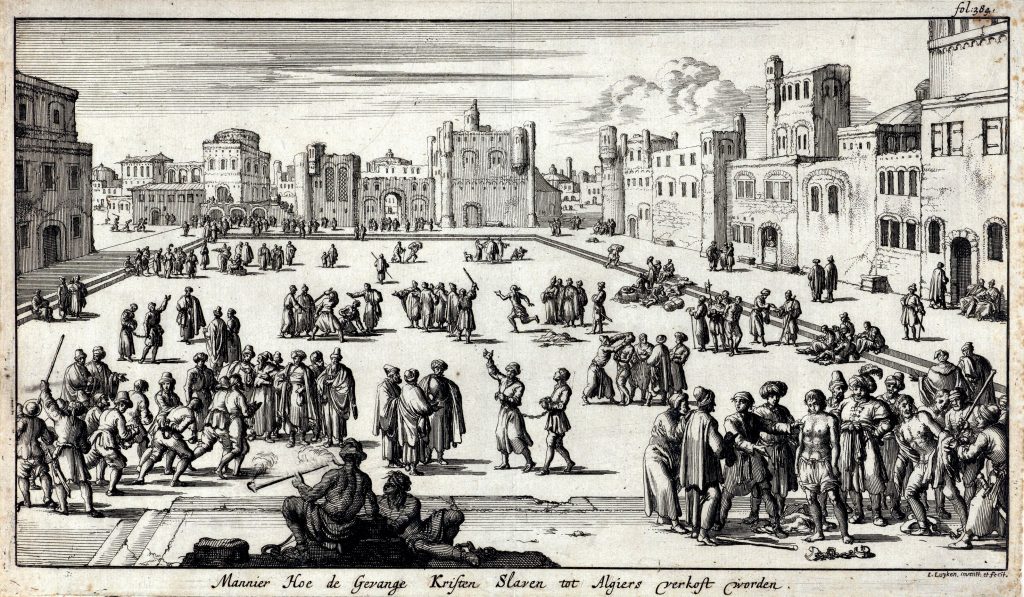 The capture of these American ships and their crews forced many citizens of the new United States to acknowledge the harsh realities of independence and the loss of the protection of the English Navy.  As a number of scholars have noted, the Algerian crisis was one of a number of foreign policy issues that raised questions about the security of the young nation.[1]

The Algerian threat laid bare the fundamental weakness of the United States under the Articles of Confederation. As Thomas Jefferson observed in the earliest days of the crisis, the United States was left with three options: payment of an annual tribute, “compelling a peace by arms,” or “abandoning the Mediterranean carriage to other nations.”[2] John Adams, argued against the idea of a military response doubting that “our States could be brought to agree in the measure” and the “we ought not fight them at all, unless we determine to fight them forever.” Without widespread support the United States was ill-prepared to engage in any such long-term conflict.[3]

By way of contrast, John Jay and Thomas Jefferson argued that the United States ought to stand firm and unlike the European powers, which paid tribute to secure safe passage in the Mediterranean, establish safe passage “by war.” Such an action, Jefferson argued “will procure us respect in Europe . . . and I think it the least expensive.”[4] Jay went further still, noting that, “the more we are treated ill abroad, the more we shall unite and consolidate at home.”[5]

Jay saw a potential upside to the crisis in Algiers.  Ultimately, Jay would incorporate aspects of this need for a stronger national government to ward off external threats in arguing in favor of the new Constitution during the ratification debates.  As Jay understood, the experience of American ill-treatment abroad had a profound effect on the American public as the young nation wrestled with the seeming existential threat of their vulnerability in the larger Atlantic world.[6]

Although the United States could afford neither war nor tribute during the Confederation Period, Jay’s observation about the power of an external threat to bring the nation together has remained true throughout the nearly two and half century history of the United States. In the near term, the need for security became “one of if not the primary reasons for constitutional reform in the 1780s.”[7] Following the ratification of the Constitution, with a new, more powerful, federal government in place, the United States was ultimately able to overcome the ‘Barbary Threat’ bringing an end to the need for either tribute or war in the Mediterranean by 1816.

[7] Totten, “Security, Two Diplomacies, and the Formation of the U.S. Constitution,” 79.

One thought on “John Jay Confronts the Algerian Crisis”