Editors’ note: We are pleased to welcome Amy H. Henderson as a guest contributor to the John Jay Papers Blog. Amy H. Henderson, Ph.D., is an art historian and museum consultant whose work focuses on the intersection of politics and decorative arts. She is completing her first book manuscript, Furnishing the Republic: Material Culture, Gender, and Politics in the Nation’s Capital, 1789-1800 (Forthcoming, Oxford University Press).

In 1943 a lineal descendant of John and Sarah Jay authenticated two old chairs as once belonging to his illustrious ancestors. According to family lore, no less a revolutionary personage than the Marquis de Lafayette had presented the pair to John Jay as a testament to their friendship. The descendant also noted that the much worn, yet still decorative needlework covers that adorned the seat, back, and arm rests were the product of the Marquis’ wife, Adrienne. In the world of founding fathers and mothers and their prized material possessions, this origin story is familiar, especially as it relates to the relationship of American statesmen with the French aristocracy and things in the fashionable French taste. Perhaps you’ve heard how Thomas Jefferson once owned chairs made for Queen Marie Antoinette before she met her fate with a guillotine? Or how George Washington, upon his final retirement from public service, gratefully presented one of the French chairs he used in his presidential mansion to his dear friend George Read? Sometimes there is a kernel of truth in these accounts, yet they tend to be incredibly challenging to prove. Thus, the one known version of the Jays’ delicate little chairs has been hiding away in recent years at the Museum of the City of New York in a state of historical uncertainty because curators could not prove the Lafayette connection. At least, that is, until a recent visit to the Columbia University Libraries and a fruitful encounter with Robb Haberman, an associate editor with the John Jay Papers, showed me how a key document could stitch together the compelling story behind the Jays’ Lafayette chairs.[1] 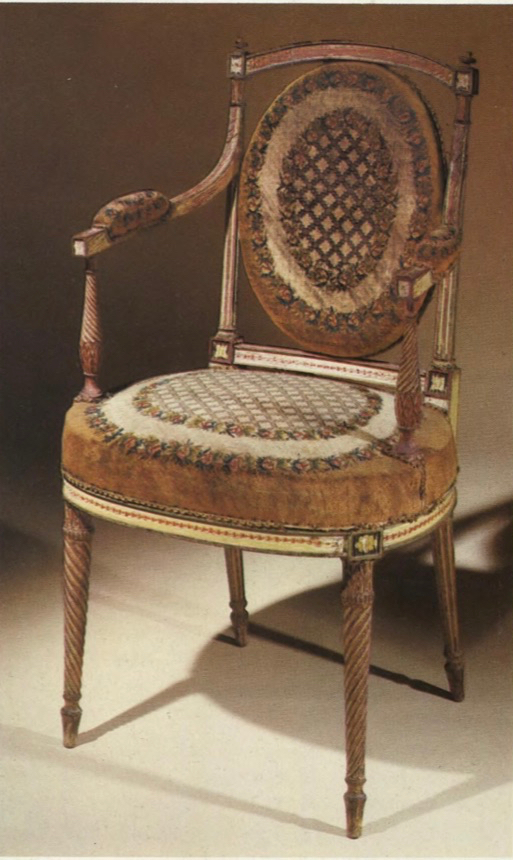 At first glance, we may be hard-pressed to see any problems in the provenance of this extant example of the Jays’ chairs. Cherished for many generations by the children and grandchildren of John and Sarah Jay’s son, Peter Augustus, the chair was never entirely divorced from its story of origin. It made the typical rounds of artifacts once owned by famous founders. In 1864, one of the pair made an appearance as “Embr’d Chair, worked by Madame Lafayette for Mrs. Jay,” at the Brooklyn Sanitary Fair; and in 1873, historian Elizabeth F. Ellet venerated the two chairs as “among the souvenirs presented by Madame de la Fayette to Mrs. Jay” in her popular book The Queens of American Society. The second chair had its turn at public display during the centennial of Washington’s inauguration in 1889, and in this instance the catalogue writers added a new detail: the cushions were embroidered by the Marchioness and presented to Mrs. Jay “on her leaving Paris in 1784.” Fifty years later, the Jays’ descendant told the story differently. Instead of noting the chair was a gift from Mrs. Lafayette to Mrs. Jay, he declared the gift exchange occurred between the French war hero and American statesman. That version of the story held steady through 1979 when The Magazine Antiques illustrated the chair in an article about John Jay’s role as Chief Justice of the Supreme Court. As far as furniture histories go, this one is pretty good, and with so much documentation it’s hard to imagine there is a mystery here. But there is one.[2]

From these details we gather the Lafayettes gave the Jays two Parisian-made chairs featuring neoclassical seat and back covers worked personally by Adrienne in 1784. Indeed, Sarah and Adrienne became close friends when the Jays resided in the French capital. It was common for women to give each other needlework as a token of friendship, and for professional upholsters to set such needlework on chair frames. What is unusual, however, is the construction of this chair. Sometime between 2012 and 2014, curators at the Museum of the City of New York realized the frame was not of French manufacture. Strict rules governed the construction techniques of Parisian joiners, and French craftsmen simply did not produce the style of joint found in this chair. In fact, the chair frame is closer in construction to English examples, bringing into question the French provenance. Unable to resolve when the Jays acquired two British chairs in the French, neoclassical style, the museums’ curators tucked the chair away for future research.[3]

At a provenance impasse, I, too, set aside this French chair puzzle and turned my attention to other aspects of the Jays’ material world. When I made that appointment to visit the Rare Book and Manuscript Library at Columbia University, my purpose, as I explained to Robb, was to learn more about Sarah’s role as a society hostess in late 1780s New York. Could he point me in the direction of furniture receipts, I asked, or information about the Broadway mansion the Jays built in 1786? Robb immediately had suggestions for me. Had I looked at Peter Augustus Jay’s Memoranda Book from 1794, he ventured? I had not, yet I hesitated to view a diary outside my admittedly narrow chronological time frame when research time can be so precious. Robb persisted, persuading me there was something useful in this particular document, if memory served him right.

Once I began to read this book, I realized this was one of those rare archival moments when you find that proverbial needle in the haystack. On page one was a list, and not just any list: here was a shopping list Peter Augustus started one week before he sailed to England to accompany his father on a diplomatic mission. Anticipating shopping opportunities galore, Peter Augustus’ relatives commissioned him to purchased special items. The first request was to have General Washington’s hair “made into a Breast-pin, like Mrs. Monro’s Ring with cypher in Pearls # of G.W. & the Gen.ls name engraved on the back.” Apple trees and a spy glass, Thomas Haw’s Evangelical Expositor and an elegant edition of Shakespeare, silver buckles and silver candlesticks, plates and dishes, and brown stout porter came in quick succession. Then I turned to item #13: “I am to request Mrs. Johnson to get for Mama two chairs seated with the seats given Mama by the Marchioness la Fayette in the most elegant fashion so as to serve as patterns for others but they are not to be gilt.” My heart raced; my pulse quickened. Unexpected, unlooked for on this particular day, I had stumbled on the evidence needed to connect the dots between the Jays’ French—but not fully French—chairs.[4] 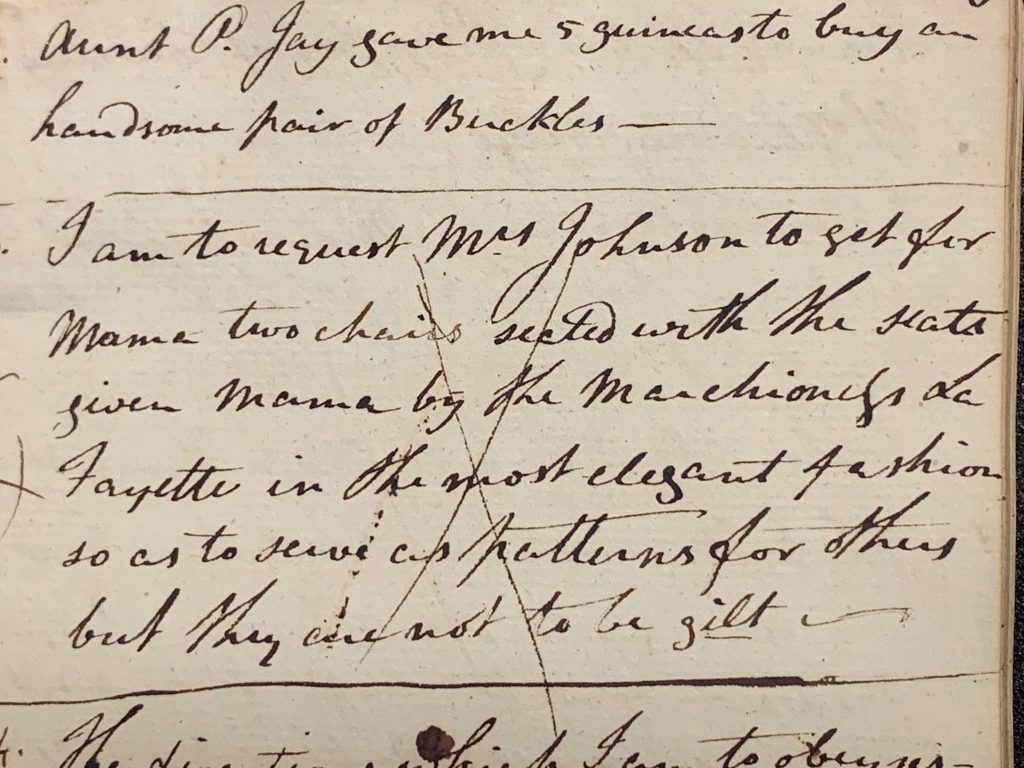 French needlework on a British chair frame resolved the mystery, and it did not take long to uncover supporting evidence. In this same book, Peter Augustus noted visiting Joshua Johnson, the American consul in London. “Mrs. Johnson” is presumably his wife, Catherine. In 1794 the Johnsons’ stylish London home served as a gathering point for Americans abroad. John Jay reported home separately to Sarah that Mrs. Johnson took charge of the jewelry orders, and she likely helped the Jays find an upholsterer. Indeed, Peter Augustus wrote his mother in August that her chairs were “in the hands of a workman” but that “from the shape of the work he will not be able to make them so fashionable as he would wish, & he equally laments your prohibition on gilding.” As the surviving chair is painted (and may in fact have gilt), perhaps the upholsterer won this important question of style. In any event, in October Sarah asked her son to fulfill one more task relating to the chairs, namely, to cut “an exact pattern of the back and arms & seat of one of those work’d Chairs,” as his sister wished “to work some to suit them in size” and hoped one of his new acquaintances could assist him “in choosing the kind of silk that will be proper to work them.” Although chairs are not specifically enumerated in the Jays’ return luggage, it seems fairly safe to conclude the extant chair in the museum relates to the international furniture commission preserved in Peter Augustus Jay’s papers.[5]

Much remains, of course, to be learned about the Jays’ Lafayette chairs. I hope these collective discoveries will prompt a more thorough look at other kinds of surviving documents in the John Jay Papers, especially those once belonging to Peter Augustus, his wife Mary, and their daughters who evidently inherited the chairs. In the meantime, I will use these advances as a jumping off point for a larger investigation that takes into consideration Sarah Jay’s personal and political investment with the chairs. For instance, this elegant relic prompts us to ask what needlework exchanges might reveal about patterns of female production and gift giving; the collaborative (and gendered) nature of furniture commissions and manufacturing; and the different ways highly stylized furniture made in Paris and London served as markers of class and identity in the early republic. Sarah and Adrienne forged a friendship on their shared love for motherhood and commitment to family, and I would hazard each woman admired essential qualities in the other. One woman represented the hope and uncharted future of a new country, and the other the beauty and graciousness of the Old World. There can be little doubt that Sarah, especially, was forever changed by their friendship. Not only did she bring home several pieces of unstretched needlework, but she also brought with her an appreciation for the politeness and sociability Adrienne taught her was a feature of the Parisian salon and might, in turn, positively influence the next generation of American citizens. This little chair—a souvenir of class and gender, collaborative consumption, international diplomacy and female friendship—has much to tell us about the founding of the United States, and I look forward to making these histories more visible with time.