The John Jay Papers Project, Columbia University Libraries, and Columbia University’s Office of the Provost are proud to present In Service to the New Nation: The Life & Legacy of John Jay, a two-day virtual conference (January 22-23, 2021) celebrating the near completion of the Project’s seven-volume series The Selected Papers of John Jay. Featuring a keynote address and panel sessions, the conference events highlight John Jay’s (1745-1829) notable career in public service and his numerous contributions to the new American republic as a jurist, statesman, diplomat, and politician.

Joanne B. Freeman, Class of 1954 Professor of American History and American Studies at Yale University, will deliver the keynote address. Freeman’s research specializes on politics and culture of revolutionary and early national periods and her publications including Affairs of Honor: National Politics in the New Republic (2001) and The Field of Blood: Violence in Congress and the Road to the Civil War (2017) have been well received with acclaim and awards. Her keynote address “Life in an Age of Conflicts and Extremes,” will cover the troubled political affairs in the nation’s opening decades and will offer interesting parallels with our current situation. The keynote address will be held via Zoom Webinar on Friday, January 22, from 6:00-7:30 PM EST.

John Jay’s 1788 “Address to the People of the State of New York” and the Dynamics of the Ratification Debate: A New Look
Todd Estes (Oakland University)

“One of them married Colonel Stuyvesandt, another of them married my grandfather”: John Jay, Genealogy, and the Shape of a New Nation
Karin Wulf (Omohundro Institute of Early American History and Culture, College of William & Mary)

As part of the broader events celebrating the near completion of the seven volumes of The Selected Papers of John Jay publication project based at Columbia University, this Omeka exhibit aims to shed light on the different aspects of Jay’s personal, familial, and public life and discuss his many civic accomplishments in shaping America’s governance, diplomacy, and judiciary. In Service to the New Nation: The Life & Legacy of John Jay draws on the correspondence, public papers, printed items, portraits, and drawings located in the various collections and libraries at Columbia University. The approximately 75 items presented include such varied materials as the transcribed Laws of King’s College, Jay’s draft of The Federalist 5, period sheet music of Governor Jay’s March, and a chart of New York City’s harbor defences. 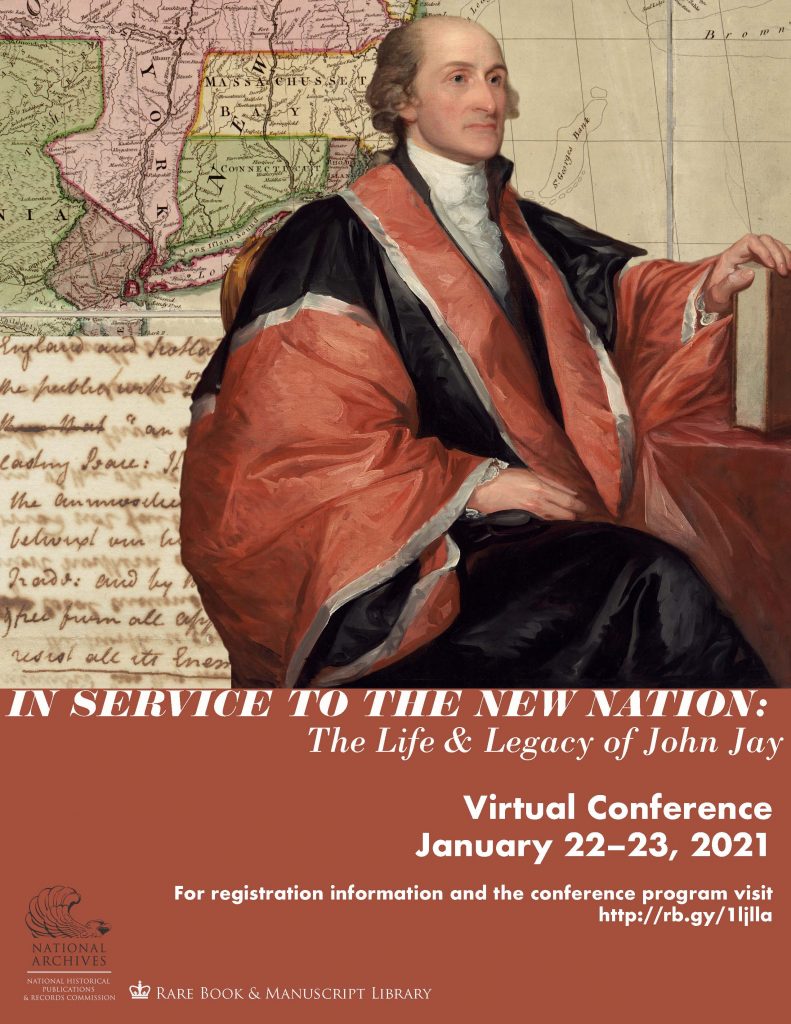