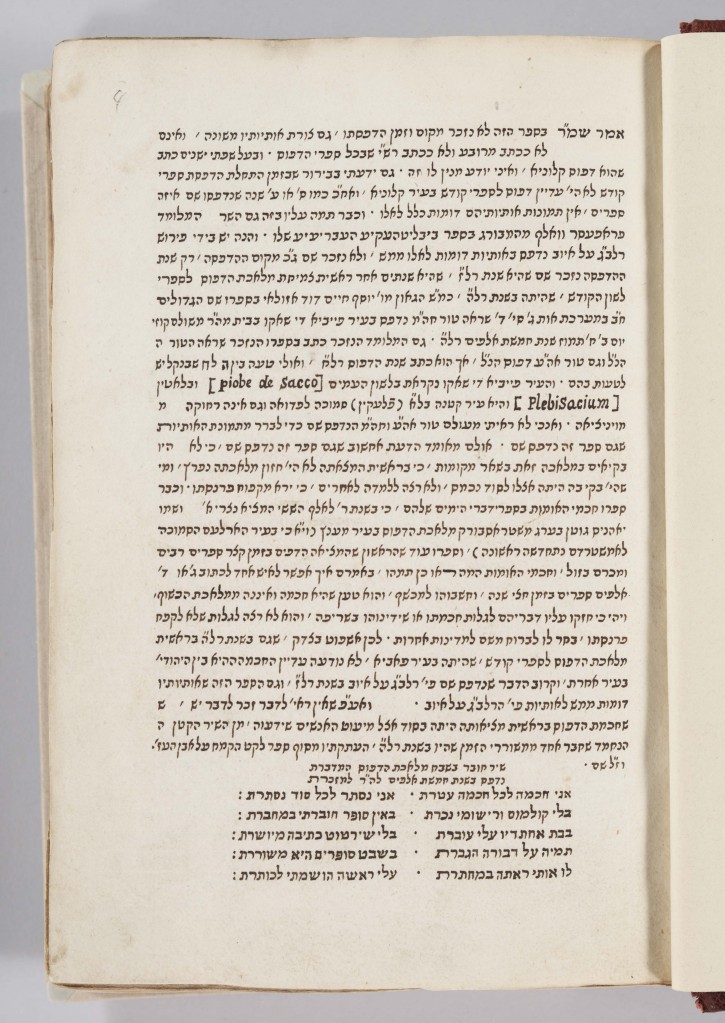 The word manuscript comes from a combination of two Latin words (manu, meaning "hand"; and script, meaning "writing").  In the literal definition of the word, a manuscript is anything written by hand (as opposed to printed).  The manuscript you see in this post would not be found as part of our "Hebrew manuscript collection," but is a manuscript nonetheless.  This manuscript is one of four leaves bound with a printed book in RBML, the Nofet Zufim, by Judah Messer Leon, printed in Mantua between 1474 and 1476 (Call Number: Goff Heb-62).

Nofet Zufim is a unique work in its own right as a Hebrew incunable (one of the first books printed from the invention of the printing press through 1501), and is the first book printed in Hebrew during the lifetime of its author.  It was extremely controversial, a philosophical text which used texts from the Hebrew Bible to demonstrate Aristotelian rhetoric.  (Its author was later expelled from Mantua, after an argument with the famous 15th century rabbi, Joseph Colon, also known as the MaHaRIK).

Columbia has 29 Hebrew incunabula in RBML.

But this series is supposed to discuss manuscripts, not printed works, and so I digress.  What’s fascinating about the manuscript attached here is that it’s a discussion of the history of early Hebrew printing.  You may notice the word in brackets, in Latin script, "Piobe de Sacco" – one of the two places that claim the very first dated Hebrew book, in this case an Arba Turim by Jacob ben Asher, which was completed on July 3, 1475 (the poem listed at the bottom of the manuscript comes from the colophon of the Arba Turim of Piove di Sacco).  This page has been dated to the 19th century, which gives us a glimpse into the research that was known at the time about early Hebrew printing.  Another page bound in with this book has been dated to the 18th century.

It also tells us a little bit about one of the owners of this book – at one point, this copy of the Nofet Zufim was owned by someone who was interested in it, not as a book of rhetoric, but rather as a rare specimen of the early days of Hebrew printing.

Ah, the stories books could tell, if they could but speak to us…