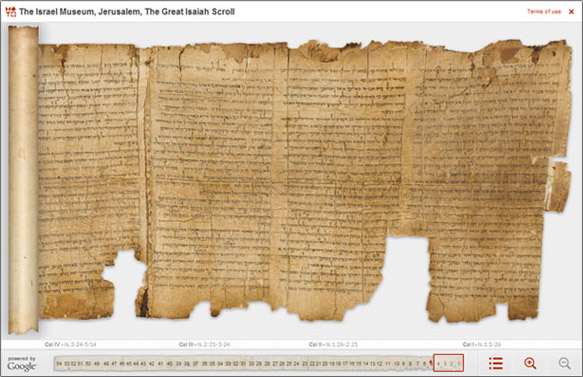 In 1947, a Bedouin shepherd exploring a cave in the Judean desert came across a fantastic treasure trove of Hebrew documents from the third to the first centuries BCE.  The Dead Sea Scrolls, as we now know them, are now the oldest known Biblical manuscripts in existence.  While they can be viewed today at the Shrine of the Book in Jerusalem, or through various facsimile publications, they had never been accessible to the entire internet-connected world.  Until today.  As part of a project to make cultural artifacts accessible to everyone, Google has teamed up with photographer Ardon Bar Hama (who has worked with Columbia to photograph some of our most important manuscripts as well) to digitize the Dead Sea Scrolls.  You can see the site in its glory here.

A second exciting digital project, also produced by Ardon Bar Hama, is the Maimonides project at the Bodleian Library, at Oxford University.  Oxford is the proud owner of a portion of Maimonides’ own copy of his legal corpus, the Mishneh Torah.  Following the wishes of a former owner, Eleazar, son of Perahya, that the manuscript "be kept available so that all scholars can correct their own version against it," the manuscript can now be viewed in its entirety online.