In addition to the classical rabbinic writings, however, Purim is unique for the lively parodies that were and are produced in honor of the holiday, which celebrates the hidden and the unexpected.  Masekhet (Tractate) Purim is probably the most famous of these.  It was originally written in 14th century Italy, but it was copied, printed, edited, and added to many times over the centuries. It is written in Aramaic and Hebrew, in the style of the Talmud itself, with additional parodies of the major Talmudic 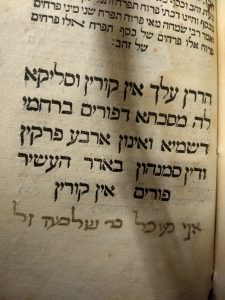 and Tosafot.  Columbia’s copy of the Venice 1552 edition includes some inscriptions from various owners, including Barukh Almanzi, whose collection forms the cornerstone of Columbia’s Judaica holdings, and, following the “hadran” at the end, Mikhel son of Shelomoh.  (The “hadran” is a traditional series of phrases one reads upon completing a Talmudic tractate.)

Another “tractate” that was common for Purim was “Masekhet Shikorim” (Tractate of the Drunken Ones). Because of the injunction that one should drink on Purim until unable to tell the difference between “blessed be Haman” (the villian) and “cursed be Mordekhai” (the hero), drunkenness is a common feature of the various Purim parodies.

An Italian poem uses a different literary genre for its Purim parody.  This manuscript’s title translates as “Give honor to the beautiful Purim” and seems to parody the Italian tradition of a “wedding poem,” treating the holiday as if it were a bride.  The end of the poem describes itself as a “pretty song to be sung in the evening and the day of Purim.”

Another poem, in Judeo-Greek (left), is followed by a story of a miraculous salvation experienced by the Jews in Sicily, called Purim Sicily.  There is an entire genre of location specific “Purims,” which commemorate miraculous salvations to the Jews in particular cities they describe. There are examples in our collections from Egypt, Saragossa, and Carpentras, in addition to this Sicilian one, and they will be discussed in a later post.

Another common form of parody was the Purim play, which used the story in the book of Esther to poke fun at contemporary events and people.  A “Shoye Shpil” written in German with Hebrew characters (below) describes the characters of the Purim story in a contemporary 19th century manner.

Purim parodies continue to be written in the present day.  Here’s an example of one created in 2016, which adds yet another chapter to the so-called “Masekhet Purim,” (with tongue-in-cheek references to contemporary controversies) and new ones are likely being prepared this week for the upcoming holiday.

2 thoughts on “Purim literature beyond the Book of Esther”