When is a Purim not on Purim?  When it’s a local Purim!  The Book of Esther was seen as the “diaspora” book in the Hebrew Bible. There is no mention of God’s name throughout the text, and commentaries discuss the concept of a “hidden” miracle – that is, events orchestrated by God, but within the natural order of things (no splitting of seas here, folks!). Throughout the early modern period, Jews in various cities recorded “miracles” of this kind that happened to them, often in scroll format, and would celebrate the day upon which the miracle took place as a local “Purim.” The stories often involve the Jews being saved from near destruction, as in the book of Esther, and when written in scrolls, they began with a similar format to the original: “And it was in the days of King…”

At a recent undergraduate conference in Jewish Studies held at Barnard College, Rami Teeter (of Oberlin College) described “The Purims of Cairo and Candia and Ritual Invention in the Early Modern World.” The Rare Book and Manuscript Library at Columbia holds examples from four such Purims: Saragossa, Carpentras, Egypt, and Sicily.

The earliest date associated with a “miracle” that led to a local Purim is 1420 in Saragossa (some scholars dispute this, and say that it was meant to be Syracusa).  As the story goes, the King of Saragossa would take an annual tour of the Jewish community. During his visit, the Jews would bring out the Torah scrolls as part of the procession to honor him. One year, the Jews decided to take the scrolls out of their cases, and to just use the cases in their parade. The night before the parade, however, the shammash had a dream in which he was told to return the scrolls to their cases, which he did.  The next morning, at the parade, the king suddenly stopped the procession, and demanded that the cases be opened. Someone had clearly told him about the removal of the scrolls. The Jews were terrified – the king would consider it an act of great offense, and it could lead to terrible repercussions! However, upon opening the cases, the scrolls were clearly in place, and the procession carried on. The Jews of the town celebrated that day as a local Purim, on which they said special prayers and read the scroll of Megilat Saragossa. Columbia holds two scrolls of Megilat Saragossa in its collection, one from the 17th century, and one from the 18th century. 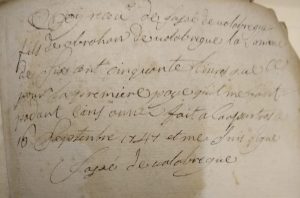 On the 15th day of the Jewish month of Kislev in the year 1512, a troop of armed men entered the walls of the Carpentras Jewish community. Carpentras was part of the Comtat Venaissin, a small group of Papal States in the south of France, and the only area in France with a continuous Jewish presence following the expulsion of the Jews from France in 1390. The Jews were protected at the whim of the Popes (and, on one occasion, the king), and an occupation by armed forces was cause for great alarm. A few blank pages in a book of prayers for Shavu’ot document the story of the troop’s visit, which was frightening enough for the community that escaping unscathed was enough to create a local holiday.

In 1524, Ahmed Pasha, the Turkish governor of Egypt, ordered the Jews to pay a huge amount of money. If he did not receive the money by a certain day, he threatened, he would kill the all of the Jews in Cairo.  On the day that the payment was supposed to be delivered, however, Ahmed Pasha was killed in a rebellion.  The Jews viewed the death of this feared authority as a miracle, and celebrated the day as Purim Mitsrayim into the 20th century.

It is unclear exactly what happened in Sicily that necessitated special liturgy, but a manuscript in Columbia’s collection with general liturgical poetry for the holiday of Purim also includes a special “poem for the miracle that happened to the Jews in Sicily.” The poem is in Judeo-Greek, the language spoken by Sicilian Jews (right).

There were many other local Purims: the 1906 Jewish Encyclopedia lists nearly 30, and there were likely others. It would be interesting to see more research on this very local and yet universal phenomenon.

Update: Rabbi Elli Fischer pointed out that there is a much longer list (in Hebrew) based on Leopold Zunz’s Ritus des synagogalen Gottesdienstes.