Although many people have been away from campus over the last year, there has been a significant increase of books available in the Judaica collection at the Rare Book and Manuscript Library.  Some books are newly arrived on campus, while others, like a work with a list of English cantillation marks and descriptions, have been here for decades, but were only processed in recent months. A few recently acquired and recently cataloged materials are described below.

1) Our collection of materials relating to Shemu’el David Luzzatto has already been described in a previous post. Our most recent addition to this collection is a letter from his son Isaiah, which deals with the publication of his father’s extensive scholarship. 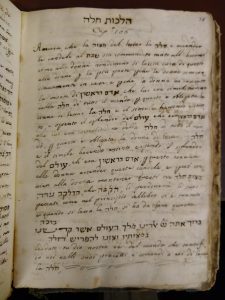 2) Rabbi Benjamin Slonik first published his Sefer Mitsvot Nashim, on the so-called “women’s laws” of menstruation, the taking of challah, and the lighting of the Shabbat candles, in Yiddish (Krakow, 1577). It was translated into Italian by Jacob ben Elhanan Heilbronn in 1614, and published in Padua, in 1625. Our new acquisition is a manuscript copy of the Italian version of this work. A post on the Global Studies blog highlights additional examples of the materials pertaining to women that we have in Columbia’s Judaica collections.

4) Another recent acquisition includes a collection of documents relating to a tragedy in Mantua in 1776, where a floor collapsed during a wedding celebration, killing sixty-five people, including the recent bride. It was a terribly traumatic tragedy in the Italian Jewish communities, as Jews from all over Italy traveled to take part in the wedding and were killed or injured there. The collection includes manuscripts and a newspaper article relating to the event.

5) Gelbe Post  was a magazine produced by the German refugee community in Shanghai immediately prior to and during World War II. This unique periodical documents this community and its activities during this time.

6) In the late 18th century, the “New Community” and “Old Community” in Amsterdam produced a series of periodicals as “discourses” around the question of modernization in the community. The Rare Book and Manuscript Library holds a unique manuscript copy of one of the Diskursn, and we were recently able to acquire the entire printed run of Diskursn from the “Naye Kille,” (New Community).  This particular volume includes the name of a previous owner of the collection of periodicals: Anschel Gumpel Ya’akov. The book had previously been held by the Ets Haim Library in Amsterdam.

7) Speaking of the Netherlands, we also acquired a document printed in the Hague called Publicatie over het Burgerrecht der Jooden in 1796. Following the establishment of the Batavian Republic, the new government convened to discuss minority rights. On September 2, 1796, they passed the Emancipation Decree, providing equal rights to Jews throughout the nation.

We’ve also added a number of important digital collections to assist our users with access, during lockdown and beyond. These include two new collections of early printed Jewish books: the Sephardic Editions collection, featuring 278 books printed in Spanish, Portuguese, Hebrew, Dutch, German and English prior to 1820, and the Hebrew and Judeo-Arabic Printing in Baghdad Online collection, featuring rare imprints from the 19th and early 20th centuries. An important upgrade to access was for alumni, who can now use Bar Ilan Responsa Project, a critical database of Biblical and Rabbinical literature. Another important e-book acquisition of modern scholarship now available to our users is a collection of about 850 contemporary academic books (mostly in Hebrew) from Magnes University Press.

A recent series of databases dealing with Israel and Mandate Palestine are also now available to Columbia users.  These include: Land legislation in mandate Palestine; Minorities in the Middle East : Jewish communities in Arab countries, 1841-1974; Minorities in the Middle East : religious communities in Jerusalem, 1843-1974 and minorities in Israel; Palestine and Israel: records of the U.S. Department of State, 1945-1959; and The British Mandate in Palestine, Arab-Jewish relations, and the U.S. Consulate at Jerusalem, 1920-1944.