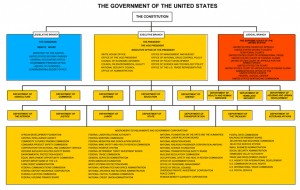 New to the U.S., or just need to brush-up on some government basics? Here's a quick run-down of U.S. government at various levels and how to find government information. (I'll be writing two follow-up posts that tell where to find primary source information for each branch of government, and show an example of a gov info search.) First, here is a U.S. government chart and three basic guides to the federal government:

The United States has several levels of government: federal, state, and local (county/city). Federal is the overarching national government, which has three branches:

Each state has its own government which echoes the federal government in its three-branch organization. The Legislative branch is composed of the state senate and house (or assembly), the Executive branch is composed of the Governor and typically many departments (structure varies by state), and the Judicial branch is composed of the state court system, headed by the state supreme court. There are different local government offices at the county and the municipal (city/town) level. Typically, cities follow a similar pattern to federal and state government, with a Mayor acting as the chief executive officer of a city. Usually, a county is larger than and encompasses many cities and towns. However, New York City is made up of five boroughs, which are each actually counties (listed at right).

What Topics are Covered by Government Documents?

The U.S. government covers a surprising number of programs, and thus data and information is available on nearly any topic you can think of, including:

Some of the few topics that aren't covered well in U.S. gov info include: