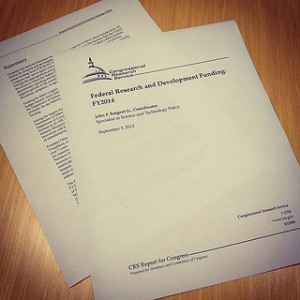 Looking for in-depth, expert research on current issues? CRS Reports are a great resource! The Congressional Research Service (CRS) is an arm of the Library of Congress that exists to keep members of Congress informed about issues related to pending legislation. CRS staff are subject experts in a variety of fields and they produce nonpartisan reports that relate these issues in an easily-digestible format.

CRS Reports can be hard to find. The federal government doesn't currently make them widely available to the public: you must request a CRS Report by title (or report number) from a member of Congress. However, you can find CRS Reports through subscription databases (like ProQuest), for some vendors for a fee, or for free from the following collections.

CRS Reports on many subjects: 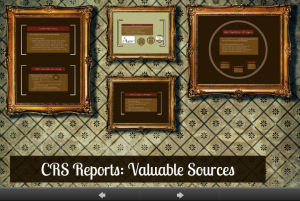 This presentation talks more about CRS, summarizes past legislation that attempted to make CRS Reports public, and how to write your member of congress to request a report. For more information about CRS Reports, see this OpenCongress.org page: http://bit.ly/CRSReports

If you are interested in immigration reporting, what follows is a selective list of places to begin your search for background information, statistics, and articles. Note: Some sources have NYC-specific information, while others are more general in nature.

The U.S. Census Bureau’s Foreign-Born Population page links you to reports and data tables which show numbers of immigrants by country of origin, period of entry, and citizenship status, and many other demographic characteristics. The data on this site does not go down to the metropolitan area level, so is better for getting a picture of immigration to the U.S. as a whole.

Interested in estimates of the numbers of undocumented immigrants? A Congressional Research Service (CRS) Report for Congress, “Unauthorized Aliens in the United States: Estimates Since 1986″, uses data from the Census Bureau’s Current Population Survey, and is periodically updated.

The Urban Institute, an economic and social policy research organization, has published many reports on immigration-related topics, including the January 2004 report, “Undocumented Immigrants: Facts and Figures.”

Two New York-based publications which publish often on immigration issues are the Gotham Gazette (link displays most recent article, links to topic archives, and also links to useful websites), and City Limits (on left side of screen, use pull-down “Topics” list to select Immigration).

Finally, for an introduction to library resources on population, migration, and refugee studies, use this helpful subject guide from my colleagues at Lehman Library. The guide lists both print and electronic sources for these topics.